This is a cross-section of the iron-based MOF bound to six ethylene molecules, as determined by neutron diffraction. The MOF consists of a carbon (gray) and oxygen (red-orange) framework with iron atoms (yellow-orange) at strategic sites to bind the ethylene carbon atoms. The attraction between the iron and unsaturated hydrocarbons like ethylene (olefins) allows the MOF to adsorb these hydrocarbons, separating them from saturated hydrocarbons (paraffins) even at high temperatures. 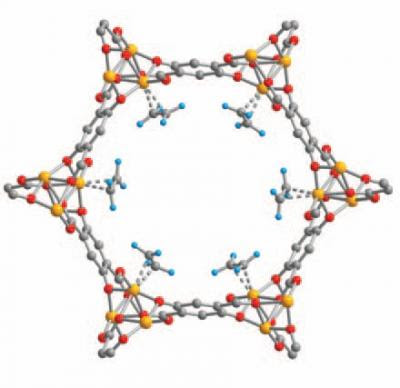 A new type of hybrid material developed at the University of California, Berkeley, could help oil and chemical companies save energy and money – and lower their environmental impacts – by eliminating an energy-intensive gas-separation process.

Today, to separate hydrocarbon gas mixtures into the pure chemicals needed to make plastics, refineries "crack" crude oil at high temperatures – 500 to 600 degrees Celsius – to break complex hydrocarbons into lighter, short-chain molecules. They then chill the gaseous mixture to 100 degrees below zero Celsius to liquefy and divide the gases into those destined for plastics and those used as fuel for home heating and cooking.

"Cryogenic distillation at low temperatures and high pressures is among the most energy-intensive separations carried out at large scale in the chemical industry, and an environmental problem because of its contributions to global climate change," said Jeffrey Long, a professor of chemistry at the UC Berkeley and a faculty researcher at Lawrence Berkeley National Laboratory.

Long and his UC Berkeley colleagues now have created an iron-based material – a metal-organic framework, or MOF – that can be used at high temperatures to efficiently separate these gases while eliminating the chilling.

"You need a very pure feedstock of propylene and ethylene for making some of the most important polymers, such as polypropylene, for consumer products, but refineries dump a lot of energy into bringing the high temperature gases down to cryogenic temperatures," Long said. "If you can do the separation at higher temperatures, you can save that energy. This material is really good at doing these particular separations."

"The research conducted by the Long group exemplifies the potential of MOF-based materials relative to olefin/paraffin separations," said chemist Peter Nickias, a Dow Fellow at Dow Chemical Company in Michigan who was not involved in the research. "More specifically, the ability of the reported iron-based MOF to separate a variety of unsaturated hydrocarbons from saturated species not only shows the versatility of the iron-MOF system, but also clearly reveals the potential of MOFs as alternative adsorbents."

Long and his colleagues at UC Berkeley and the National Institute of Standards and Technology (NIST) in Gaithersburg, Md., report their findings in the March 30 issue ofScience.

The iron-MOF is also good at purifying natural gas, which is a mixture of methane and various types of hydrocarbon impurities that have to be removed before the gas can be used by consumers. These impurities can then be sold for other uses, Long said.

"MOF compounds have a very high surface area, which provides lots of area a gas mixture can interact with, and that surface contains iron atoms that can bind the unsaturated hydrocarbons," Long said. "Acetylene, ethylene and propylene will stick to those iron sites much more strongly than will ethane, propane or methane. That is the basis for the separation."

Nickias noted that increased supplies of natural gas from shale have provided more opportunity to extract and use ethylene and propylene from natural gas, and a variety of materials and approaches are being examined to cut energy use during the refining and purification of olefins.

"Significant energy savings could be achieved if a non-distillation separation could be implemented, or more realistically, the load on a cryogenic distillation unit can be reduced via upstream modifications to the process," Nickias said.

Petroleum refined for the chemical industry is typically a mix of hydrocarbons, primarily two-carbon molecules – ethane, ethylene and acetylene – and three-carbon chains – propane and propylene. Cryogenic distillation separates these compounds – all of them gases at room temperature – by liquefying them at low temperatures and high pressure, which causes them to separate by density. Ethylene and propylene go into plastic polymers, while ethane and propane are typically used for fuel.

The researchers found that when pumping a gas mixture through the iron-based MOF (Fe-MOF-74), the propylene and ethylene bind to the iron embedded in the matrix, letting pure propane and ethane through. In their trials, the ethane coming out was 99.0 to 99.5 percent pure. The propane output was close to 100 percent pure, since no propylene could be detected.

After the ethane and propane emerge, the MOF can be heated or depressurized to release ethylene and propylene pure enough for making polymers.

"Once you saturate the material with ethylene, for example – you shut off the valve, stop the feed gas, warm up the absorber unit and the ethylene would come out in pure form as a gas," Long said.

Through a microscope, Fe-MOF-74 looks like a collection of narrow tubes packed together like drinking straws in a box. Each tube is made of organic materials and six long strips of iron, which run lengthwise along the tube. Analysis by Long's colleagues at the NIST Center for Neutron Research showed that different light hydrocarbons have varied levels of attraction to the tubes' iron. By passing a mixed-hydrocarbon gas through a series of filters made of the tubes, the hydrocarbon with the strongest affinity can be removed in the first filter layer, the next strongest in the second layer, and so forth.

"It works well at 45 degrees Celsius, which is closer to the temperature of hydrocarbons at some points in the distillation process," said Wendy Queen, a postdoctoral fellow at NIST who worked for six months in Long's UC Berkeley lab. "The upshot is that if we can bring the MOF to market as a filtration device, the energy-intensive cooling step potentially can be eliminated. We are now trying out metals other than iron in the MOF in case we can find one that works even better."

Long and his laboratory colleagues are developing iron-based MOFs to capture carbon from smokestack emissions and sequester it to prevent its release into the atmosphere as a greenhouse gas. Similar MOFs, which can be made with different pore sizes and metals, turn out to be ideal for separating different types of hydrocarbons and for storing hydrogen and methane for use as fuel.

The research is part of the Center for Gas Separations Relevant to Clean Energy Technologies, an Energy Frontier Research Center funded by the Department of Energy that focuses primarily on creating novel materials for capturing and storing carbon dioxide. Contacts and sources:
Robert Sanders
University of California - Berkeley
on March 29, 2012