Quantum theory describes the world of atoms very precisely. Still, it defies our macroscopic conception of everyday’s world due to its many anti-intuitive predictions. The wave-particle dualism probably is the best known example and means that matter may spread and interfere like waves. Now, an international team of researchers has recorded the interference process of individual molecules. The recordings were published by the journal “nature nanotechnology” online.

Every individual molecule fluoresces and becomes part of the interference pattern. Figures a) - e) show the states after 0, 2, 20, 40, and 90 minutes, respectively. 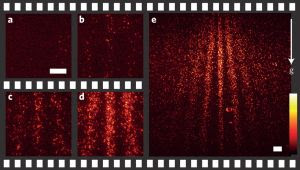 “Seeing how the interference pattern develops with every light spot, molecule after molecule, and how a basic principle of quantum mechanics is visualized enhances our understanding of the atomic world,” explains Professor Marcel Mayor, who conducts research and teaches at Karlsruhe Institute of Technology and the University of Basel.

For the experiment performed in cooperation with colleagues from the universities of Vienna and Tel Aviv, Mayor synthesized fluorescent phtalocyanin molecules having an atomic mass of up to 1298 AMU and consisting of up to 114 atoms. Then, the molecules were accelerated, sent as a slow beam through an optical grating, and deposited on the entrance vacuum window, where they were excited to fluoresce by a laser. For a period of 90 minutes, a fluorescence microscope observed the build-up of the interference pattern. Its setup has a sufficient sensitivity to exactly locate every individual molecule on the window with a precision of about 10 nanometers.

In the future, the setup might be used to study the so-called van-der-Waals interaction between molecules in the beam and those in the grating, which is reflected rather sensitively by the interference pattern. Researchers are also interested in finding out from which size and under which conditions particles behave quantum mechanically or classically, i.e. in the so-called decoherence. These findings may be the basis for novel applications, such as quantum computers. “But the many insights given by this experiment into the quantum world and its boundaries already are of high value,” Mayor agrees with many experts, among others Bum Suk Zhao and Wieland Schöllkopf from the Fritz Haber Institute, Berlin, who evaluate the experiment in the accompanying comment article in the same journal.

The paper in the web portal of the nature nanotechnology journal
http://www.nature.com/nnano/journal/vaop/ncurrent/full/nnano.2012.34.html