Much Faster Than A Speeding Bullet, Planets And Stars Escape The Milky Way

Idan Ginsburg, a graduate student in Dartmouth's Department of Physics and Astronomy, studies some of the fastest moving objects in the cosmos. When stars and their orbiting plants wander too close to the supermassive black hole at the center of the Milky Way, their encounter with the black hole's gravitational force can either capture them or eject them from the galaxy, like a slingshot, at millions of miles per hour.

Dartmouth astronomers Idan Ginsburg and professor Gary Wegner suggest that the supermassive black hole at our galaxy’s center can fling stars and planets outward at high speeds. Eventually, these will escape the Milky Way and travel through the intergalactic void. 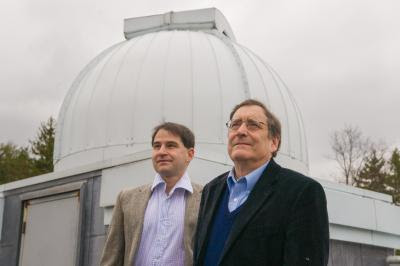 Although their origin remains a mystery and although they are invisible, black holes found at galaxy centers make their presence known through the effects they have on their celestial surroundings. The Milky Way's black hole, a monster with a mass four million times that of the Sun, feeds on some of its neighbors and thrusts others out into the intergalactic void.

It's the expelled objects that "become hypervelocity planets and stars," say Ginsburg. "What we learn from these high-speed travelers has significance for our understanding of planetary formation and evolution near the central black hole."

Ginsburg, along with his doctoral adviser Professor Gary Wegner, and Harvard Professor Abraham Loeb are publishing a paper in the Monthly Notices of the Royal Astronomical Society. It describes how the team constructed computer simulations of these hypervelocity bodies as a means to understanding the dynamics involved. "The paper is a 'call to arms' for other astronomers to join the search," Ginsburg announces.

Born in Israel, Ginsburg came to the United States as a child and grew up as a Midwesterner. After high school in Lawrence, Kan., graduating from the University of Illinois at Urbana-Champaign, and studies at Harvard, Ginsburg came to Dartmouth almost five years ago.

For the origin of hypervelocity bodies, Ginsburg and his colleagues point to the close interaction of a binary star system—two stars orbiting a common center—with a massive black hole. The likely scenario is the black hole draws one of the pair into its gravitational well while simultaneously ejecting the other at 1.5 million miles per hour. More than 20 of these hypervelocity stars have been identified in the Milky Way.

Ginsburg contends, however, that you could see a hypervelocity star ejected with planets still in tow. In this case, you might be able to see the planets as they cross in front of the star like an eclipse, appearing as a dip in its light curve. While the paper discusses the lone hypervelocity planets, it also draws attention to the planets rotating around the hypervelocity stars.

"That is something that we can detect now," Ginsburg says, "which I think makes it very interesting. … As of yet nobody has looked for these planets transiting hypervelocity stars. We are telling people in this paper that you should look for these."