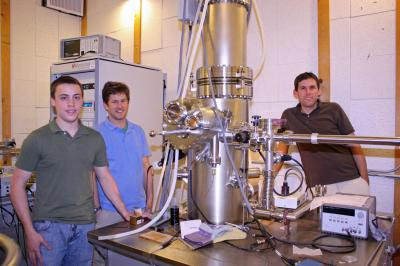 Graphite, more commonly known as pencil lead, could become the next big thing in the quest for smaller and less power-hungry electronics.

Resembling chicken wire on a nano scale, graphene – single sheets of graphite – is only one atom thick, making it the world's thinnest material. Two million graphene sheets stacked up would not be as thick as a credit card.

The tricky part physicists have yet to figure out how to control the flow of electrons through the material, a necessary prerequisite for putting it to work in any type of electronic circuit. Graphene behaves very different than silicon, the material currently used in semiconductors.

Last year, a research team led by University of Arizona physicists cleared the first hurdle by identifying boron nitride, a structurally identical but non-conducting material, as a suitable mounting surface for single-atom sheets of graphene. The team also showed that in addition to providing mechanical support, boron nitride improves the electronic properties of graphene by smoothening out fluctuations in the electronic charges.

Now the team found that boron nitride also influences how the electrons travel through the graphene. Published in Nature Physics, the results open up new ways of controlling the electron flow through graphene.

"If you want to make a transistor for example, you need to be able to stop the flow of electrons," said Brian LeRoy, an assistant professor in the University of Arizona's department of physics. "But in graphene, the electrons just keep going. It's difficult to stop them."

See how hexagonal patterns emerge when graphene and boron nitride sheets meet in this animated image. 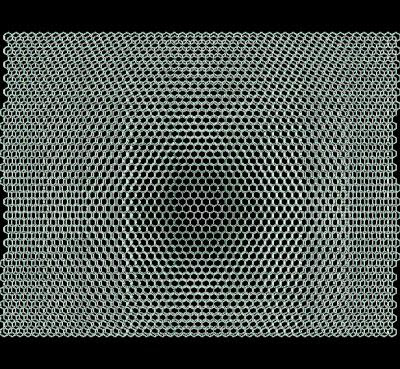 LeRoy said relativistic quantum mechanical effects that come into play at atomic scales cause electrons to behave in ways that go against our everyday experiences of how objects should behave.

"Normally, when you throw a tennis ball against a wall, it bounces back," LeRoy said. "Now think of the electrons as tennis balls. With quantum mechanical effects, there is a chance the ball would go through and end up on the other side. In graphene, the ball goes through 100 percent of the time."

This strange behavior makes it difficult to control where electrons are going in graphene. However, as LeRoy's group has now discovered, mounting graphene on boron nitride prevents some of the electrons from passing to the other side, a first step toward a more controlled electron flow.

The group achieved this feat by placing graphene sheets onto boron nitride at certain angles, resulting in the hexagonal structures in both materials to overlap in such a way that secondary, larger hexagonal patterns are created. The researchers call this structure a superlattice.

If the angle is just right, they found, a point is reached where almost no electrons go through.

When a sheet of graphene sits atop a sheet of boron nitride at an angle, a secondary hexagonal pattern emerges that determines how electrons flow across the sample. 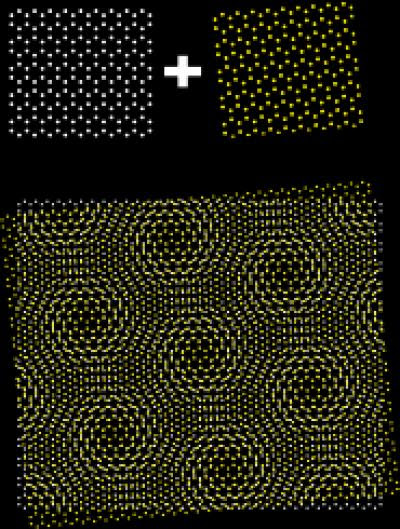 "You could say we created holes in the wall," LeRoy said, "and as soon as the wall has holes in it, we find that some of the tennis balls no longer go through. It's the opposite of what you would expect. That shows you how weird this is. It's all due to those relativistic quantum effects."

The discovery puts the technology a bit closer to someday being able to actually control the flow of electrons through the graphene, the authors of the paper said.

"The effect depends on the size of the hexagonal pattern resulting from the overlapping sheets," explained Matthew Yankowitz, a first-year graduate student in LeRoy's lab and the study's lead author.

The pattern, he explained, creates a periodic modulation of the potential – picture a ball rolling across an egg carton.

"It's a purely electronic effect brought about by the structure of the two materials and how they sit on top of each other," Yankowitz said. "It's similar to the Moiré pattern you see when someone wears a striped shirt on TV."

As of now, the researchers are not yet able to control how the graphene and boron nitride end up oriented relative to each other when they combine the two materials. Therefore, they make many samples and check the structure of each one under an electron microscope.

"With our scanning tunneling microscope, we can get an image of each superlattice and measure its size," Yankowitz said. "We take a picture and see what the pattern looks like. If the hexagonal pattern is too small, the samples are no good and we throw them out."

Yankowitz said about 10 to 20 percent of samples showed the desired effect.

If it becomes possible to someday automate this process, graphene-based microelectronics might be well on their way to propel us from the silicon age to the graphene age.

Contacts and sources:
Daniel Stolte
University of Arizona
on March 30, 2012