This first direct estimate of the number of light planets around red dwarf stars has just been announced by an international team using observations with the HARPS spectrograph on the 3.6-metre telescope at ESO's La Silla Observatory in Chile [1]. A recent announcement (eso1204 -http://www.eso.org/public/news/eso1204/), showing that planets are ubiquitous in our galaxy used a different method that was not sensitive to this important class of exoplanets.

This artist's impression shows a sunset seen from the super-Earth Gliese 667 Cc. The brightest star in the sky is the red dwarf Gliese 667 C, which is part of a triple star system. The other two more distant stars, Gliese 667 A and B appear in the sky also to the right. Astronomers have estimated that there are tens of billions of such rocky worlds orbiting faint red dwarf stars in the Milky Way alone. 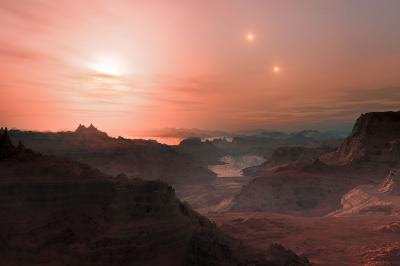 The HARPS team has been searching for exoplanets orbiting the most common kind of star in the Milky Way — red dwarf stars (also known as M dwarfs [2]). These stars are faint and cool compared to the Sun, but very common and long-lived, and therefore account for 80% of all the stars in the Milky Way.

"Our new observations with HARPS mean that about 40% of all red dwarf stars have a super-Earth orbiting in the habitable zone where liquid water can exist on the surface of the planet," says Xavier Bonfils (IPAG, Observatoire des Sciences de l'Univers de Grenoble, France), the leader of the team. "Because red dwarfs are so common — there are about 160 billion of them in the Milky Way — this leads us to the astonishing result that there are tens of billions of these planets in our galaxy alone."

The HARPS team surveyed a carefully chosen sample of 102 red dwarf stars in the southern skies over a six-year period. A total of nine super-Earths (planets with masses between one and ten times that of Earth) were found, including two inside the habitable zones of Gliese 581 (eso0915 -http://www.eso.org/public/news/eso0915/) and Gliese 667 C respectively. The astronomers could estimate how heavy the planets were and how far from their stars they orbited.

By combining all the data, including observations of stars that did not have planets, and looking at the fraction of existing planets that could be discovered, the team has been able to work out how common different sorts of planets are around red dwarfs. They find that the frequency of occurrence of super-Earths [3] in the habitable zone is 41% with a range from 28% to 95%.

On the other hand, more massive planets, similar to Jupiter and Saturn in our Solar System, are found to be rare around red dwarfs. Less than 12% of red dwarfs are expected to have giant planets (with masses between 100 and 1000 times that of the Earth).

As there are many red dwarf stars close to the Sun the new estimate means that there are probably about one hundred super-Earth planets in the habitable zones around stars in the neighbourhood of the Sun at distances less than about 30 light-years [4].

"The habitable zone around a red dwarf, where the temperature is suitable for liquid water to exist on the surface, is much closer to the star than the Earth is to the Sun," says Stephane Udry (Geneva Observatory and member of the team). "But red dwarfs are known to be subject to stellar eruptions or flares, which may bathe the planet in X-rays or ultraviolet radiation, and which may make life there less likely."

One of the planets discovered in the HARPS survey of red dwarfs is Gliese 667 Cc [5]. This is the second planet in this triple star system (see eso0939 -http://www.eso.org/public/news/eso0939/ - for the first) and seems to be situated close to the centre of the habitable zone. Although this planet is more than four times heavier than the Earth it is the closest twin to Earth found so far and almost certainly has the right conditions for the existence of liquid water on its surface. This is the second super-Earth planet inside the habitable zone of a red dwarf discovered during this HARPS survey, after Gliese 581d was announced in 2007 and confirmed in 2009.

"Now that we know that there are many super-Earths around nearby red dwarfs we need to identify more of them using both HARPS and future instruments. Some of these planets are expected to pass in front of their parent star as they orbit — this will open up the exciting possibility of studying the planet's atmosphere and searching for signs of life," concludes Xavier Delfosse, another member of the team (eso1210 -http://www.eso.org/public/news/eso1210/).