We have all heard of the smartphone and any day now, most of us will have one. Not far behind: the smart home.

Writing in the latest issue of the journal Science, Washington State University's Diane Cook says it won't be long before our homes act as "intelligent agents" that use sensors and software to anticipate our needs and tend to tasks that improve our health, energy efficiency, even social media.

Many homes are already halfway there, with computer chips helping microwave popcorn, record TV shows, and turn on coffee makers and thermostats.

Smart homes act as “intelligent agents” that use sensors and software to anticipate our needs and tend to tasks that improve our health, energy efficiency, even social media. 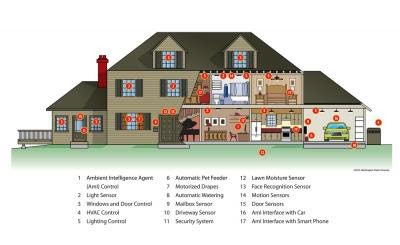 "If you have a programmable thermostat, you have the beginnings of a smart home," says Cook, a WSU professor of Electrical Engineering and Computer Science. "What we're trying to do is get the home to take over the job of programming it."

"We want your home as a whole to think about what you need and use the components in it to do the right thing," she says.

Cook has been applying artificial intelligence in test homes since coming to WSU in 2006. Sites around the Northwest, including 18 apartments in Seattle, already show that the technology can help monitor aging-in-place elderly residents and alert caregivers if they are not completing ordinary activities like rising, eating, bathing, and taking medications.

Similarly, homes can be designed to automatically regulate energy use, the source of nearly half a consumer's energy diet. Smart home technologies can run washers at off-peak times, turn off unneeded appliances and put out lights in empty rooms without residents having to make conscious choices. Many communities, including Pullman, are already testing such concepts through the use of smart meters.

While the smartphone lets people take their social media with them, the home could in effect act like a car's Bluetooth, facilitating hands-free conversation from any room. For that matter, says Cook, cameras would let residents "Skype from anywhere."

But while the technology is available, technologies like smart meters and in-home cameras raise privacy concerns for many Americans. The technologies, like so many others, face a classic challenge of being accepted and adopted, says Cook.

She has seen that in particular with the elderly participants in her studies.

"Ultimately," she says, "when people get a better understanding of what these technologies do and see a usefulness that counterbalances their skittishness, adoption will start. I'm guessing some technologies will gain momentum once they're starting to be used."