Discovery Shakes Beliefs Of Earth To The Core

For a century, scientists have assumed that the Earth has same chemical make-up as the sun. But this belief has been challenged by scientists at The Australian National University.

Professors Ian Campbell and Hugh O’Neill from the Research School of Earth Sciences at ANU said their research shakes up our understanding of the Earth’s chemistry – right to the core.

This picture of Earth is sometimes called the Blue Marble. 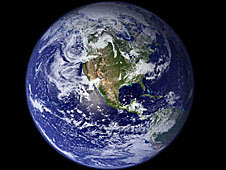 As it is easier to measure the chemical make-up of chondritic meteorites, planetary geologists have long used these to more precisely determine the sun’s composition – and therefore the composition of the Earth. From this, scientists have concluded that the Earth has a ‘chondritic’ composition.

Professor Campbell said this thesis has been challenged again and again.

“Recent discoveries have shown that the ratio of two of the rare earth elements in Earth’s volcanic rocks is higher than in chondritic meteorites. Many scientists have explained this by arguing that there must be a hidden reservoir of these elements near the centre of the Earth to balance this ratio out. This reservoir would also be enriched in the heat producing elements uranium, thorium and potassium,” he said.

Professor Campbell spent twenty years researching mantle plumes – columns of hot rock that rise from the boundary of the Earth’s core and are the mechanism that removes heat from the Earth’s centre.

“The problem with the idea of a hidden reservoir is that although these elements could be hidden we would be able to detect the heat they produce,” he said.

“However, mantle plumes simply don’t release enough heat for these reservoirs to exist. As a consequence the Earth simply does not have the same composition as chondrites or the sun.”

Professor O’Neill has developed an explanation as to why the Earth’s composition may differ from chondrites.

“The Earth is thought to have formed by collision of planetary bodies of increasing size. In our research we suggest that by the time these planetary bodies had reached a moderate size they developed an outer shell that contained a significant amount of heat-producing elements,” he said.

“During the final stages of the Earth’s formation this outer shell was lost by a process called ‘collisional erosion’. This produced an Earth that has fewer heat producing elements than chondritic meteorites, which explains why the Earth doesn’t have the same chemical composition as chondritic meteorites.”

The research has been published in Nature.