CO2 Was Hidden In The Ocean During The Ice Age

Why did the atmosphere contain so little carbon dioxide (CO2) during the last Ice Age 20,000 years ago? Why did it rise when the Earth's climate became warmer? Processes in the ocean are responsible for this, says a new study based on newly developed isotope measurements. This study has now been published in the scientific journal "Science" by scientists from the Universities of Bern and Grenoble and the Alfred Wegener Institute for Polar and Marine Research in the Helmholtz Association.

An artist's impression of ice age Earth at glacial maximum. 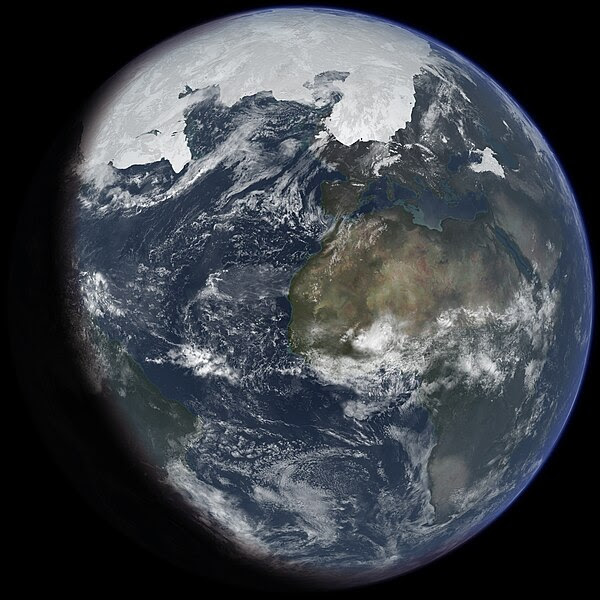 Around 20,000 years ago, the atmospheric CO2 concentration during the last Ice Age was distinctly lower than in the following warm period. Measurements from Antarctic ice cores showed this already two decades ago. An international team of glaciologists thereafter looked even further back in time. The climate researchers found that this close connection between carbon dioxide and temperature has existed over the past 800,000 years: with low CO2 concentrations during the Ice Ages and higher CO2 values during warm periods. Now they tried to answer also the question as to where the carbon dioxide was hidden during the Ice Ages and how it got back into the atmosphere at their ends.

"We have now been able to identify processes in the ocean which are connected to the observed rise in CO2", says Dr. Jochen Schmitt, lead author of the recently published study and researcher at the Oeschger Centre for Climate Change Research at the University of Bern. According to Schmitt, during the Ice Age more and more carbon dioxide accumulated in the deep ocean, causing the concentration of atmospheric CO2 to drop. Only at the end of the Ice Age was this stored CO2 transported back to the sea surface through changing ocean circulation and thus emitted back into the atmosphere, write the scientists in the scientific journal "Science".

A new method for isotope measurements has now made it possible for the first time "to reliably decode the fingerprint of the CO2 preserved in the ice", explains Schmitt. He and his colleague Prof. Hubertus Fischer initially developed these new isotope measurement methods for ice cores at the Alfred Wegener Institute for Polar and Marine Research and further refined them in many years of research work after moving to Bern. Using the new method the glaciologists extract the air trapped in the ice core completely and the CO2 contained in the air is thoroughly cleaned. The different isotopes of the CO2 are analysed in a mass spectrometer and from this data the origin of the carbon dioxide can be derived.

Researchers suggested back in the eighties that this puzzle could be solved using an isotopic "CO2 fingerprint". However, it had so far not been possible to make a precise analysis of the carbon dioxide trapped in the Antarctic ice due to the technical hurdles. The glaciologists and the climate researchers at the Universities of Bern and Grenoble and of the Alfred Wegener Institute for Polar and Marine Research have now managed a breakthrough with their study.

"The new data have already enabled us to revise and improve a few theories about the possible reasons for CO2 fluctuations. Measurement data from the past enable us to gain a clearer idea about how the climate must have looked at the end of the Ice Age", says Jochen Schmitt. And now the data must be compared with the results from climate models to verify and further develop the models. "In addition to the scientific curiosity about how our Earth functioned in the past, the main question to be asked is how the Earth will develop under the influence of man", explains Jochen Schmitt. These are important scenarios for the future because the CO2 content in the atmosphere has never been anywhere near as high over the past 800,000 years as today, says the climate researcher.
Contacts and sources:
Dr Folke Mehrtens
Helmholtz Association of German Research Centres