Berkeley Lab scientists are leaders of BOSS, the Baryon Oscillation Spectroscopic Survey- They and their colleagues in the third Sloan Digital Sky Survey have announced the most precise measurements ever made of the era when dark energy turned on.
BOSS measures the three-dimensional clustering of galaxies at various redshifts, revealing their precise distance, the age of the universe at that redshift, and how fast the universe has expanded. The measurement uses a "standard ruler" based on the regular variations of the temperature of the cosmic microwave background, which reveal variations in the density of matter in the early universe that gave rise to the later clustering of galaxies and large-scale structure of the universe today. 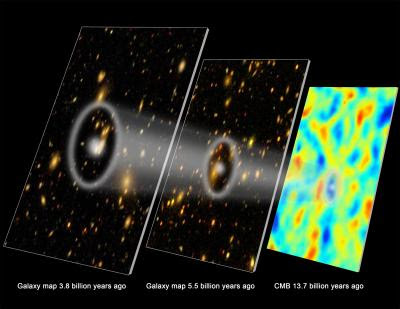 Some six billion light years ago, almost halfway from now back to the big bang, the universe was undergoing an elemental change. Held back until then by the mutual gravitational attraction of all the matter it contained, the universe had been expanding ever more slowly. Then, as matter spread out and its density decreased, dark energy took over and expansion began to accelerate.

Today BOSS, the Baryon Oscillation Spectroscopic Survey, the largest component of the third Sloan Digital Sky Survey (SDSS-III), announced the most accurate measurement yet of the distance scale of the universe during the era when dark energy turned on.

"We've made precision measurements of the large-scale structure of the universe five to seven billion years ago – the best measure yet of the size of anything outside the Milky Way," says David Schlegel of the Physics Division at the U.S. Department of Energy's Lawrence Berkeley National Laboratory (Berkeley Lab), BOSS's principal investigator. "We're pushing out to the distances when dark energy turned on, where we can start to do experiments to find out what's causing accelerating expansion."

How to measure expansion in an accelerating universe

Accelerating expansion was announced less than 14 years ago by both the Supernova Cosmology Project (SCP) based at Berkeley Lab and the competing High-z Supernova Search Team, a discovery that resulted in 2011 Nobel Prizes for the SCP's Saul Perlmutter and High-z Team members Brian Schmidt and Adam Riess. Acceleration may result from an unknown something dubbed "dark energy" – or, dark energy may be just a way of saying we don't understand how gravity really works.

The first step in finding out is to establish a detailed history of expansion. Unlike supernova searches, which depend on the brightness of exploding stars, BOSS uses a technique called baryon acoustic oscillation (BAO) to determine the distances to faraway galaxies.

Baryon acoustic oscillation measures the angle across the sky of structures of known size, the peaks where galaxies cluster most densely in the network of filaments and voids that fill the universe. Since these density peaks recur regularly, the angle between appropriate pairs of galaxies as precisely measured from Earth reveals their distance – the narrower the apparent angle, the farther away they are.

Knowing the distance to an object tells its age as well, since its light travels from there to here at known speed. And the redshift of the light reveals how the universe has expanded since that time, as expansion stretches space itself; the wavelength of light traveling through space toward Earth stretches proportionally, becoming redder and revealing the expansion of the universe since the light left its source.

"BOSS's first major cosmological results establish the accurate three-dimensional positions of 327,349 massive galaxies across 3,275 square degrees of the sky, reaching as far back as redshift 0.7 – the largest sample of the universe ever surveyed at this high density," says Martin White of Berkeley Lab's Physics Division, a professor of physics and astronomy at the University of California at Berkeley and chair of the BOSS science survey teams. "BOSS's average redshift is 0.57, equivalent to some six billion light-years away. BOSS gives that distance to within 1.7 percent – 2,094 megaparsecs plus or minus 34 megaparsecs – the most precise distance constraint ever obtained from a galaxy survey."

The origin of BAO, the regular clustering of ordinary matter (called "baryons" by astronomical convention), was the pressure of sound waves ("acoustic") moving through the universe when it was still so hot that light and matter were mixed together in a kind of soup, in which the sound waves created areas of regularly varying density ("oscillation"). By 380,000 years after the big bang, expansion had cooled the soup enough for ordinary matter to condense into hydrogen atoms (invisible dark matter was also part of the soup) and for light to go its separate way.

At that moment variations in density were preserved as variations in the temperature of the cosmic microwave background (CMB), a phenomenon first measured by Berkeley Lab astrophysicist George Smoot, for which he shared the 2006 Nobel Prize. The warmer regions of the CMB signal areas where the density of matter was greater; these regions seeded the galaxies and clusters of galaxies that form the large-scale structure of the universe today. Thus the cosmic microwave background establishes the basic scale of baryon acoustic oscillation used to measure the expansion history of the universe.

BOSS's data on galaxy clustering and redshifts can be applied not only to BAO but also to a separate technique called "redshift space distortions" – a direct test of gravity that measures how fast neighboring galaxies are moving together to form galaxy clusters.

What if dark energy isn't an unknown force or substance, but instead a shortcoming of Albert Einstein's General Theory of Relativity, our best-yet theory of gravity? General Relativity predicts how fast galaxies should be moving toward one another in galaxy clusters, and, in the aggregate, how fast the structure of the universe should be growing. Any departure from its predictions would mean the theory is flawed.

"We depend on redshift to know expansion rates and how structure was growing at different times in the past," says Beth Reid, a Hubble Fellow at Lawrence Berkeley National Laboratory who directed the BOSS study of redshift space distortions. "But redshifts aren't uniform. Galaxies are carried along in the Hubble flow as the universe expands, but they also have their own velocities. They tend to fall toward denser regions, for example. Because the ones on the far side of a dense region are coming toward us, their redshift makes them look closer than they really are; the opposite is true for the galaxies on the near side, which are falling away from us – they look farther away."

Statistical analysis of the redshifts of the hundreds of thousands of galaxies in the BOSS dataset can take into account the peculiarities of local variation and still produce a dependable measure of distance, the Hubble expansion rate, and the growth rate of structure in the universe. With these techniques, Reid and her colleagues have measured gravity on a scale of 100 million light years, far larger than the most accurate gravity measure yet, which is based on the distance from Earth to the moon.

For each 15-minute exposure of the deep sky, astronomers plug a thousand optical fibers into a plate that fits at the focal plane of the Sloan Telescope. Each fiber feeds the light of an individual galaxy to BOSS’s advanced spectrograph. 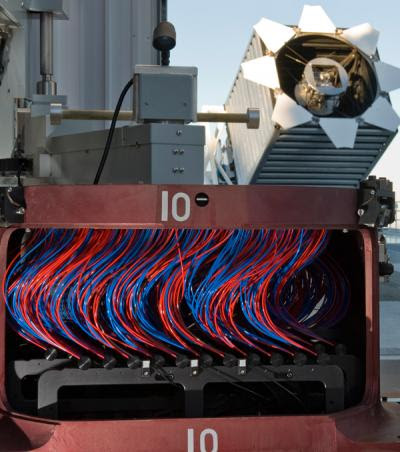 The right tools to do the job

BOSS obtained these best-yet measures with the wide-field Sloan Telescope at the Apache Point Observatory in New Mexico, designed especially for galaxy surveys but mounting a spectrograph far more sophisticated than was available to earlier SDSS surveys.

For each 15-minute exposure, covering three degrees of the sky, a thousand optical fibers are inserted by hand into aluminum "plug plates" and positioned at the telescope's focal plane; each fiber is targeted on a specific distant bright galaxy, selected from earlier SDSS imaging. The BOSS instrument uses 50 percent more fibers than earlier SDSS runs, each with finer diameter; for more coverage and finer resolution the new spectrograph incorporates two red cameras using the thick, red-sensitive astronomical CCDs invented and fabricated at Berkeley Lab, as well as two new blue cameras.

"All the data collected by BOSS flows through a data-processing pipeline at Berkeley Lab," says Stephen Bailey of the Physics Division, who describes himself as the "baby sitter of the pipeline." Working with Schlegel at Berkeley Lab and Adam Bolton at the University of Utah, Bailey "turns the data into something we can use – catalogues of the hundreds of thousands galaxies, eventually well over a million, each identified by their two-dimensional positions in the sky and their redshifts." The data are processed and stored on the Riemann computer cluster, operated by Berkeley Lab's High-Performance Computing Services group.

The current crop of BOSS papers is based on less than a quarter of the data BOSS will continue to collect until the survey ends in 2014. So far, all lines of inquiry point toward the so-called "concordance model" of the universe: a "flat" (Euclidean) universe that bloomed from the big bang 13.7 billion years ago, a quarter of which is cold dark matter – plus a few percent visible, ordinary, baryonic matter (the stuff we're made of). All the rest is thought to be dark energy in the form of Einstein's cosmological constant: a small but irreducible energy of puzzling origin that's continually stretching space itself.

But it's way too soon to think that's the end of the story, says Schlegel. "Based on the limited observations of dark energy we've made so far, the cosmological constant may be the simplest explanation, but in truth, the cosmological constant has not been tested at all. It's consistent with the data, but we really have only a little bit of data. We're just beginning to explore the times when dark energy turned on. If there are surprises lurking there, we expect to find them."
###

"The clustering of galaxies in the SDSS-III Baryon Oscillation Spectroscopic Survey: Baryon acoustic oscillations in the Data Release 9 spectroscopic galaxy sample," by Anderson et al, has been submitted to the Monthly Notices of the Royal Astronomical Society.

"The clustering of galaxies in the SDSS-III Baryon Oscillation Spectroscopic Survey: Measurements of the growth of structure and expansion rate at z=0.57 from anisotropic clustering," by Reid et al, has been submitted to the Monthly Notices of the Royal Astronomical Society.

Funding for SDSS-III has been provided by the Alfred P. Sloan Foundation, the Participating Institutions, the National Science Foundation, and the U.S. Department of Energy Office of Science. The SDSS-III web site is http://www.sdss3.org.

DOE's Office of Science is the single largest supporter of basic research in the physical sciences in the United States, and is working to address some of the most pressing challenges of our time. For more information, please visit the Office of Science website at science.energy.gov/.