The brain appears to be wired more like the checkerboard streets of New York City than the curvy lanes of Columbia, Md., suggests a new brain imaging study. The most detailed images, to date, reveal a pervasive 3D grid structure with no diagonals, say scientists funded by the National Institutes of Health.


This detail from a DSI scan shows a fabric-like 3-D grid structure of connections in monkey brain. 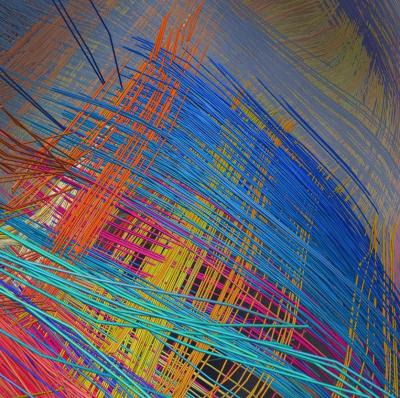 "Far from being just a tangle of wires, the brain's connections turn out to be more like ribbon cables -- folding 2D sheets of parallel neuronal fibers that cross paths at right angles, like the warp and weft of a fabric," explained Van Wedeen, M.D., of Massachusetts General Hospital (MGH), A.A. Martinos Center for Biomedical Imaging and the Harvard Medical School. "This grid structure is continuous and consistent at all scales and across humans and other primate species."

Wedeen and colleagues report new evidence of the brain's elegant simplicity March 30, 2012 in the journal Science. The study was funded, in part, by the NIH's National Institute of Mental Health (NIMH), the Human Connectome Project of the NIH Blueprint for Neuroscience Research, and other NIH components.

"Getting a high resolution wiring diagram of our brains is a landmark in human neuroanatomy," said NIMH Director Thomas R. Insel, M.D. "This new technology may reveal individual differences in brain connections that could aid diagnosis and treatment of brain disorders."

Knowledge gained from the study helped shape design specifications for the most powerful brain scanner of its kind, which was installed at MGH's Martinos Center last fall. The new Connectom diffusion magnetic resonance imaging (MRI) scanner can visualize the networks of crisscrossing fibers – by which different parts of the brain communicate with each other – in 10-fold higher detail than conventional scanners, said Wedeen.

"This one-of-a-kind instrument is bringing into sharper focus an astonishingly simple architecture that makes sense in light of how the brain grows," he explained. "The wiring of the mature brain appears to mirror three primal pathways established in embryonic development."

As the brain gets wired up in early development, its connections form along perpendicular pathways, running horizontally, vertically and transversely. This grid structure appears to guide connectivity like lane markers on a highway, which would limit options for growing nerve fibers to change direction during development. If they can turn in just four directions: left, right, up or down, this may enforce a more efficient, orderly way for the fibers to find their proper connections – and for the structure to adapt through evolution, suggest the researchers.

Curvature in this DSI image of a whole human brain turns out to be folding of 2-D sheets of parallel neuronal fibers that cross paths at right angles. This picture came from the new Connectom scanner. 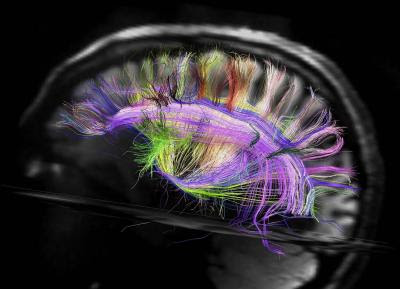 Obtaining detailed images of these pathways in human brain has long eluded researchers, in part, because the human cortex, or outer mantle, develops many folds, nooks and crannies that obscure the structure of its connections. Although studies using chemical tracers in neural tracts of animal brains yielded hints of a grid structure, such invasive techniques could not be used in humans.

Wedeen's team is part of a Human Connectome Project Harvard/MGH-UCLA consortium that is optimizing MRI technology to more accurately to image the pathways. In diffusion imaging, the scanner detects movement of water inside the fibers to reveal their locations. A high resolution technique called diffusion spectrum imaging (DSI) makes it possible to see the different orientations of multiple fibers that cross at a single location – the key to seeing the grid structure.

In the current study, researchers performed DSI scans on postmortem brains of four types of monkeys – rhesus, owl, marmoset and galago – and in living humans. They saw the same 2D sheet structure containing parallel fibers crossing paths everywhere in all of the brains – even in local path neighborhoods. The grid structure of cortex pathways was continuous with those of lower brain structures, including memory and emotion centers. The more complex human and rhesus brains showed more differentiation between pathways than simpler species.

Among immediate implications, the findings suggest a simplifying framework for understanding the brain's structure, pathways and connectivity.

The technology used in the current study was able to see only about 25 percent of the grid structure in human brain. It was only apparent in large central circuitry, not in outlying areas where the folding obscures it. But lessons learned were incorporated into the design of the newly installed Connectom scanner, which can see 75 percent of it, according to Wedeen.

Much as a telescope with a larger mirror or lens provides a clearer image, the new scanner markedly boosts resolving power by magnifying magnetic fields with magnetically stronger copper coils, called gradients. Gradients make it possible to vary the magnetic field and get a precise fix on locations in the brain. The Connectom scanner's gradients are seven times stronger than those of conventional scanners. Scans that would have previously taken hours – and, thus would have been impractical with living human subjects – can now be performed in minutes.

"Before, we had just driving directions. Now, we have a map showing how all the highways and byways are interconnected," said Wedeen. "Brain wiring is not like the wiring in your basement, where it just needs to connect the right endpoints. Rather, the grid is the language of the brain and wiring and re-wiring work by modifying it."