Earth Siblings Can Be Different! Chemical Clues On The Formation Of Planetary Systems

The study of the photospheric stellar abundances of the planet-host stars is the key to understanding how protoplanets form, as well as which protoplanetary clouds evolve planets and which do not. These studies, which have important implications for models of giant planet formation and evolution, also help us to investigate the internal and atmospheric structure and composition of extrasolar planets.

In this study the 55Cnc planetary system has been analyzed: the Earth sibling in this system presents a very different chemical structure. 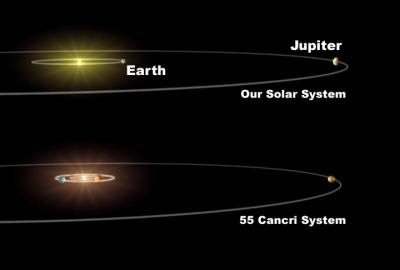 Theoretical studies suggest that C/O and Mg/Si, are the most important elemental ratios in determining the mineralogy of terrestrial planets, and they can give us information about the composition of these planets. The C/O ratio controls the distribution of Si among carbide and oxide species, while Mg/Si gives information on the silicate mineralogy. In 2010 Bond et al. (2010b) carried out the first numerical simulations of planet formation in which the chemical composition of the proto-planetary cloud was taken as an input parameter. Terrestrial planets were found to form in all the simulations with a wide variety of chemical compositions so these planets might be very different from the Earth.

Delgado Mena et al. (2010) have carried out the first detailed and uniform study of C, O, Mg and Si abundances for 61 stars with detected planets and 270 stars without detected planets from the homogeneous high-quality unbiased HARPS GTO sample. They found mineralogical ratios quite different from those in the Sun, showing that there is a wide variety of planetary systems which are unlike the Solar System. Many planetary-host stars present a Mg/Si value lower than 1, so their planets will have a high Si content to form species such as MgSiO3. This type of composition can have important implications for planetary processes like plate tectonics, atmospheric composition and volcanism.

'There could be billions of Earthlike planets in the Universe but a great majority of them may have a totally different internal and atmospheric structure. Building planets in chemically non-solar environments (which are very common in the Universe) may lead to the formation of strange worlds, very different from the Earth! The amount of radioactive and some refractory elements (especially Si) may have drastic implications for planetary processes such as plate tectonics and volcanic activity,' concludes Garik Israelian.

The latest numerical simulations have shown that a wide range of extrasolar terrestrial planet bulk compositions are likely to exist. Planets simulated as forming around stars with Mg/Si ratios less than 1 are found to be Mg-depleted (compared to the Earth), consisting of silicate species such as pyroxene and various types of feldspars. Planetary carbon abundances also vary in accordance with the host stars' C/O ratio. The predicted abundances are in keeping with observations of polluted white dwarfs (expected to have accreted their inner planets during their previous red giant stage).

'The observed variations in the key C/O and Mg/Si ratios for known planetary host stars implies that a wide variety of extrasolar terrestrial planet compositions are likely to exist, ranging from relatively "Earthlike" planets to those that are dominated by C, such as graphite and carbide phases (e.g. SiC, TiC),' Delgado Mena stresses.

The results of Delgado Mena et al. (2010) were used in this study as they are the first to determine the abundance of all of the required elements in a completely internally consistent manner, using high quality spectra and an identical approach for all stars and elements, for a large sample of both host and non-host stars.

The chemical and dynamical simulations were combined by assuming that each embryo retains the composition of its formation location and contributes the same composition to the simulated terrestrial planet. The innermost terrestrial planets (located within ∼0.5 AU from the host star) contain a significant amount of the refractory elements Al and Ca (∼47% of the planetary mass). Planets forming beyond ∼0.5 AU from the host star contain steadily less Al and Ca with increasing distance. One planetary system, 55 Cnc, has a C/O ratio above 1 (C/O = 1.12). This system produced carbon-enriched "Earthlike" planets. All of the terrestrial planets considered in this work have compositions dominated by O, Fe, Mg and Si, most of these elements being delivered in the form of silicates or metals (in the case of iron). However, important differences between those planets forming in systems with C/O < 0.8 (HD17051, HD19994) and those with C/O > 0.8 (55Cnc) have been found.

'We are working hard to decrease abundance measurement errors and make the results of theoretical models and numerical simulations more reliable,' comments González Hernández, 'There is much work to be done'.