Seawater circulation pumps hydrogen and boron into the oceanic plates that make up the seafloor, and some of this seawater remains trapped as the plates descend into the mantle at areas called subduction zones. By analyzing samples of submarine volcanic glass near one of these areas, scientists found unexpected changes in isotopes of hydrogen and boron from the deep mantle. They expected to see the isotope "fingerprint" of seawater. But in volcanoes from the Manus Basin they also discovered evidence of seawater distilled long ago from a more ancient plate descent event, preserved for as long as 1 billion years. The data indicate that these ancient oceanic "slabs" can return to the upper mantle in some areas, and that rates of hydrogen exchange in the deep Earth may not conform to experiments. The research is published in the February 26, 2012, advanced on line publication of Nature Geoscience. 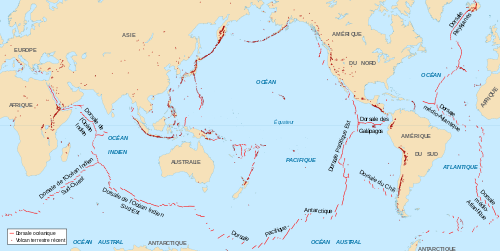 As Carnegie coauthor Erik Hauri explained, "Hydrogen and boron have both light and heavy isotopes. Isotopes are atoms of the same element with different numbers of neutrons. The volcanoes in the Manus Basin are delivering a mixture of heavy and light isotopes that have been observed nowhere else. The mantle under the Manus Basin appears to contain a highly distilled ancient water that is mixing with modern seawater."

When seawater-soaked oceanic plates descend into the mantle, heavy isotopes of hydrogen and boron are preferentially distilled away from the slab, leaving behind the light isotopes, but also leaving it dry and depleted of these elements, making the "isotope fingerprint" of the distillation process difficult to identify. But this process appears to have been preserved in at least one area: submarine volcanoes in the Manus Basin of Papua New Guinea, which erupted under more than a mile of seawater (2,000 meters). Those pressures trap water from the deep mantle within the volcanic glass.

Lead author Alison Shaw and coauthor Mark Behn, both former Carnegie postdoctoral researchers, recognized another unique feature of the data. Lab experiments have shown very high diffusion rates for hydrogen isotopes, which move through the mantle as tiny protons. This diffusion should have long-ago erased the hydrogen isotope differences observed in the Manus Basin volcanoes.

"That is what we typically see at mid-ocean ridges," remarked Hauri. "But that is not what we found at Manus Basin. Instead we found a huge range in isotope abundances that indicates hydrogen diffusion in the deep Earth may not be analogous to what is observed in the lab."

The team's * finding means is that surface water can be carried into the deep Earth by oceanic plates and be preserved for as long as 1 billion years. They also indicate that the hydrogen diffusion rates in the deep Earth appear to be much slower than experiments show. It further suggests that these ancient slabs may not only return to the upper mantle in areas like the Manus Basin, they may also come back up in hotspot volcanoes like Hawaii that are produced by mantle plumes.

The results are important to understanding how water is transferred and preserved in the mantle and how it and other chemicals are recycled to the surface.

The Carnegie Institution for Science (carnegieScience.edu) has been a pioneering force in basic scientific research since 1902. It is a private, nonprofit organization with six research departments throughout the U.S. Carnegie scientists are leaders in plant biology, developmental biology, astronomy, materials science, global ecology, and Earth and planetary science.