Tiny, Implantable Medical Device Can Propel Itself Through Bloodstream

Stanford engineers develop a high-frequency, wirelessly powered device with an antenna small enough to fit in the bloodstream.

Engineers at Stanford have developed a wirelessly powered, self-propelled medical device that can propel itself through the blood stream to deliver drugs, perform diagnostics or microsurgeries. 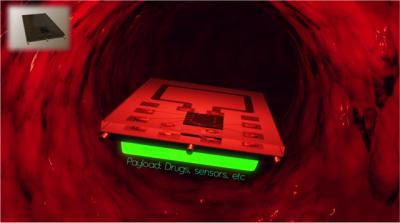 Someday, your doctor may turn to you and say, "Take two surgeons and call me in the morning." If that day arrives, you may just have Ada Poon to thank.

Yesterday, at the International Solid-State Circuits Conference (ISSCC) before an audience of her peers, electrical engineer Poon demonstrated a tiny, wirelessly powered, self-propelled medical device capable of controlled motion through a fluid—blood more specifically. The era of swallow-the-surgeon medical care may no longer be the stuff of science fiction.

Poon is an assistant professor at the Stanford School of Engineering. She is developing a new class of medical devices that can be implanted or injected into the human body and powered wirelessly using electromagnetic radio waves. No batteries to wear out. No cables to provide power.

"Such devices could revolutionize medical technology," said Poon. "Applications include everything from diagnostics to minimally invasive surgeries."

Certain of these new devices, like heart probes, chemical and pressure sensors, cochlear implants, pacemakers, and drug pumps, would be stationary within the body. Others, like Poon's most recent creations, could travel through the bloodstream to deliver drugs, perform analyses, and perhaps even zap blood clots or removing plaque from sclerotic arteries.

The idea of implantable medical devices is not new, but most of today's implements are challenged by power, namely the size of their batteries, which are large, heavy and must be replaced periodically. Fully half the volume of most of these devices is consumed by battery.

"While we have gotten very good at shrinking electronic and mechanical components of implants, energy storage has lagged in the move to miniaturize," said co-author Teresa Meng, a professor of electrical engineering and of computer science at Stanford. "This hinders us in where we can place implants within the body, but also creates the risk of corrosion or broken wires, not to mention replacing aging batteries."

Poon's devices are different. They consist of a radio transmitter outside the body sending signals to an independent device inside the body that picks up the signal with an antenna of coiled wire. The transmitter and the antenna are magnetically coupled such that any change in current flow in the transmitter produces a voltage in the coiled wire — or, more accurately, it induces a voltage. The power is transferred wirelessly. The electricity runs electronics on the device and propels it through the bloodstream, if so desired.

It sounds easy, but it is not. Poon had to first upend some long-held assumptions about the delivery of wireless power inside the human body.

For fifty years, scientists have been working on wireless electromagnetic powering of implantable devices, but they ran up against mathematics. According to the models, high-frequency radio waves dissipate quickly in human tissue, fading exponentially the deeper they go.

This image shows the scale of the wirelessly powered, self-propelled medical device developed by electrical engineer Ada Poon at Stanford. 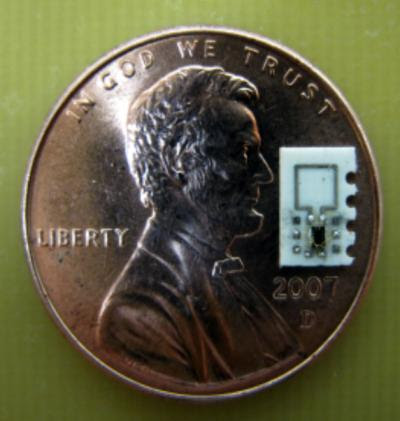 Low-frequency signals, on the other hand, penetrate well, but require antennae a few centimeters in diameter to generate enough power for the device, far too large to fit through all but the biggest arteries. In essence, because the math said it could not be done, the engineers never tried.

Then a curious thing happened. Poon started to look more closely at the models. She realized that scientists were approaching the problem incorrectly. In their models, they assumed that human muscle, fat and bone were generally good conductors of electricity, and therefore governed by a specific subset of the mathematical principles known as Maxwell's equations — the "quasi-static approximation" to be exact.

Poon took a different tack, choosing instead to model tissue as a dielectric — a type of insulator. As it turns out human tissue is a poor conductor of electricity. But, radio waves can still move through them. In a dielectric, the signal is conveyed as waves of shifting polarization of atoms within cells. Even better, Poon also discovered that human tissue is a "low-loss" dielectric — that is to say little of the signal gets lost along the way.

She recalculated and made a surprising find: Using new equations she learned high-frequency radio waves \ travel much farther in human tissue than originally thought.

"When we extended things to higher frequencies using a simple model of tissue we realized that the optimal frequency for wireless powering is actually around one gigahertz," said Poon, "about 100 times higher than previously thought."

More significantly, however, her revelation meant that antennae inside the body could be 100 times smaller and yet deliver the same power.

Poon was not so much in search of a new technology; she was in search of a new math. The antenna on the device Poon demonstrated at the conference yesterday is just two millimeters square; small enough to travel through the bloodstream.

She has developed two types of self-propelled devices. One drives electrical current directly through the fluid to create a directional force that pushes the device forward. This type of device is capable of moving at just over half-a-centimeter per second. The second type switches current back-and-forth in a wire loop to produce swishing motion similar to the motion a kayaker makes to paddle upstream.

"There is considerable room for improvement and much work remains before these devices are ready for medical applications," said Poon. "But for the first time in decades the possibility seems closer than ever."

Ada Poon's research was made possible by the support of C2S2 Focus Center, Olympus Corporation, and Taiwan Semiconductor Manufacturing Company.