The galaxy Arp 220 is home to several giant star clusters—about 10 million solar masses—that are twice as massive as any comparable star cluster in the Milky Way Galaxy. McMaster University's Christine Wilson is captivated by this turbulent galaxy that provides such a target-rich environment for watching stars form.

The reason that star formation is going wild is that the galaxy is in the late stages of a merger between two larger galaxies. "This is a nearby look at a phenomenon that was common in the early universe, when many galaxies were merging," says Wilson.

Arp 220: Spirals in Collision, Arp 220 is the brightest object in the local universe 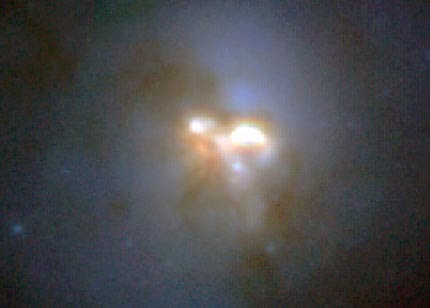 At this week's meeting of the American Association for the Advancement of Science (AAAS) in Vancouver, Wilson will be presenting findings on Arp 220's dazzling rate of star formation—200 times faster than our own Milky Way. What's more, it's all happening in a much smaller space. The star forming core of Arp 220 is only about 3,000 light years across, compared to our own galaxy which measures about 60,000 light years.

Left: A "true-color" image of the central pan of the Arp 220 taken with the WFPC on the Hubble Space Telescope. Right: Ground based view of ARP 220 Using the Herschel Space Observatory, an orbiting telescope, Wilson's group has found Arp 220 to have large amounts of very warm molecular hydrogen gas, a surprising find that implies molecular hydrogen is the dominant coolant in the high-temperature gas. Wilson's team has also observed a massive wind from the centre of the galaxy, removing molecular gas from the central star forming core.

Wilson presented her group's findings at the AAAS symposium The Life Cycle of Matter in Galaxies: Results from the Herschel Space Observatory that on Saturday, February 18, from 8:30 to 11:30 a.m., in Room 109 of the Vancouver Convention Centre West Building. On Friday, February 17, Wilson gave a talk on the use of high-resolution imaging to study the earliest phases of star and star cluster formation.

Wilson's research is funded by the Natural Sciences and Engineering Research Council of Canada (NSERC).