Squeezing What Hasn’t Been Squeezed Before: Scientists Score Another Victory Over Uncertainty In Quantum Physics Measurements


Squeezing what hasn't been squeezed before

Most people attempt to reduce the little uncertainties of life by carrying umbrellas on cloudy days, purchasing automobile insurance or hiring inspectors to evaluate homes they might consider purchasing. For scientists, reducing uncertainty is a no less important goal, though in the weird realm of quantum physics, the term has a more specific meaning.

For scientists working in quantum physics, the Heisenberg Uncertainty Principle says that measurements of properties such as the momentum of an object and its exact position cannot be simultaneously specified with arbitrary accuracy. As a result, there must be some uncertainty in either the exact position of the object, or its exact momentum. The amount of uncertainty can be determined, and is often represented graphically by a circle showing the area within which the measurement actually lies.

Michael Chapman, a professor in the School of Physics at Georgia Tech, poses with optical equipment in his laboratory. Chapman’s research team is exploring squeezed states using atoms of Bose-Einstein condensates. 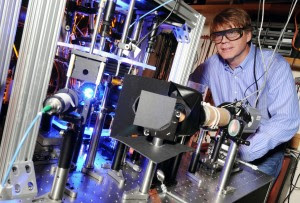 Over the past few decades, scientists have learned to cheat a bit on the Uncertainty Principle through a process called "squeezing," which has the effect of changing how the uncertainty is shown graphically. Changing the circle to an ellipse and ultimately to almost a line allows one component of the complementary measurements – the momentum or the position, in the case of an object – to be specified more precisely than would otherwise be possible. The actual area of uncertainty remains unchanged, but is represented by a different shape that serves to improve accuracy in measuring one property.

This squeezing has been done in measuring properties of photons and atoms, and can be important to certain high-precision measurements needed by atomic clocks and the magnetometers used to create magnetic resonance imaging views of structures deep inside the body. For the military, squeezing more accuracy could improve the detection of enemy submarines attempting to hide underwater or improve the accuracy of atom-based inertial guidance instruments.

Now physicists at the Georgia Institute of Technology have added another measurement to the list of those that can be squeezed. In a paper appearing online February 26 in the journal Nature Physics, they report squeezing a property called the nematic tensor, which is used to describe the rubidium atoms in Bose-Einstein condensates, a unique form of matter in which all atoms have the same quantum state. The research was sponsored by the National Science Foundation (NSF).

"What is new about our work is that we have probably achieved the highest level of atom squeezing reported so far, and the more squeezing you get, the better," said Michael Chapman, a professor in Georgia Tech's School of Physics. "We are also squeezing something other than what people have squeezed before."

Scientists have been squeezing the spin states of atoms for 15 years, but only for atoms that have just two relevant quantum states – known as spin ½ systems. In collections of those atoms, the spin states of the individual atoms can be added together to get a collective angular momentum that describes the entire system of atoms.

In the Bose-Einstein condensate atoms being studied by Chapman's group, the atoms have three quantum states, and their collective spin totals zero – not very helpful for describing systems. So Chapman and graduate students Chris Hamley, Corey Gerving, Thai Hoang and Eva Bookjans learned to squeeze a more complex measure that describes their system of spin 1 atoms: nematic tensor, also known as quadrupole.

Nematicity is a measure of alignment that is important in describing liquid crystals, exotic magnetic materials and some high temperature superconductors.

"We don't have a spin vector pointing in a particular direction, but there is still some residual information in where this collection of atoms is pointing," Chapman explained. "That next higher-order description is the quadrupole, or nematic tensor. Squeezing this actually works quite well, and we get a large degree of improvement, so we think it is relatively promising."

Experimentally, the squeezing is created by entangling some of the atoms, which takes away their independence. Chapman's group accomplishes this by colliding atoms in their ensemble of some 40,000 rubidium atoms.

"After they collide, the state of one atom is connected to that of the other atom, so they have been entangled in that way," he said. "This entanglement creates the squeezing."

"In principle, this should be a straightforward experiment, but it turns out that the biggest challenge is that magnetic fields in the laboratory fluctuate due to environmental factors such as the effects of devices such as computer monitors," Chapman said. "If we had a noiseless laboratory, we could measure the magnetic field both with and without squeezed states to demonstrate the enhanced precision. But in our current lab environment, our measurements would be affected by outside noise, not the limitations of the atomic sensors we are using."

The new squeezed property could also have application to quantum information systems, which can store information in the spin of atoms and their nematic tensor.

"There are a lot of things you can do with quantum entanglement, and improving the accuracy of measurements is one of them," Chapman added. "We still have to obey Heisenberg's Uncertainty Principle, but we do have the ability to manipulate it."