On The Brink Of Mass Extinctions

As scientists warn that the Earth is on the brink of a period of mass extinctions, they are struggling to identify ecosystem responses to environmental change. But to truly understand these responses, more information is needed about how the Earth's staggering diversity of species originated.

Curiously, a vexing modeling mystery has stymied research on this topic: mathematical models have told us that complex ecosystems, such as jungles, deserts and coral reefs, in which species coexist and interact with another, cannot persist--even though they obviously do.

Scientists have improved their ability to model ecosystems by incorporating more information about predator/prey relationships into their computations. 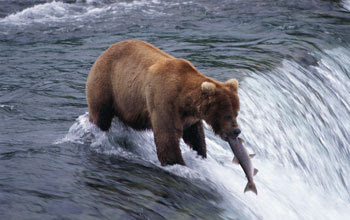 But now, Stefano Allesina and Si Tang, both of the University of Chicago, have solved that vexing modeling mystery, and have thereby laid the groundwork for improvements in the modeling of complex ecosystems to environmental change.

The researchers' work, which was funded by the National Science Foundation (NSF), is published in this week's issue of Nature.

The tension between mathematical models of ecosystems and the existence of the Earth's rich biodiversity was first exposed about 40 years ago by the development of a ground-breaking mathematical model that represented the relationship between ecosystem stability and diversity; the model was developed by Robert M. May of Oxford University.

According to May's model, ecosystems that harbor large numbers of interacting species would necessarily be extremely unstable--so unstable that even slight perturbations, such as variable weather and environmental conditions, would be enough to trigger massive extinctions within them. Therein lies a paradox: According to May's modeling, the persistence in nature of the complex ecosystems we observe should be exceedingly improbable.

Ever since May released his modeling results, scientists have been attempting to identify factors that enable species to persist despite the general tendency towards instability and extinctions highlighted by May's results. Now, in their Nature paper, Allesina and Tang explain why May's results do not accurately describe ecosystems in which "Eat or be eaten", relationships (predator/prey relationships) are prevalent. Allesina explains: "May's model assumes that any two species in a large ecological network interact with one another at random, and without any consideration of the specific type of interaction between them, whether it is a predator-prey relationship, a mutualistic relationship or a competitive relationship."

But in their recent research, Allesina and Tang modeled ecosystems in which species consume each other in addition to interacting with one another as competitors or mutualists. Their results explain why large numbers of species do, in fact, thrive instead of necessarily going extinct as predicted by May's model. This advance provides the foundation for the development of increasingly sophisticated analyses of ecosystem responses to environmental change.

Allesina believes that it is predator/prey relationships (not competitor or mutualistic relationships) that provide the necessary stability for almost infinite numbers of species to exist in ecosystems. They do so by keeping the size of species populations in check at supportable levels. Allesina explains, "When prey are high, predators increase and reduce the number of prey by predation. When predators are low, prey decrease and thus reduce the number of predators by starvation. These predator/prey relationships thereby promote stability in ecosystems and enable them to maintain large numbers of species."

By contrast, mutualistic relationships may reinforce the growth of large populations and competitive relationships may depress population numbers to the point of ecological instability. Allesina says that May's model mixed various types of species interactions but could not represent these relationships accurately because of technical modeling constraints that he and Tang overcame.

"The results of Allesina and Tang's network analyses are important," says David Spiller, an NSF program director, "because they show that the stability properties of complex ecological systems are determined by the type of interaction among species (predation, competition, mutualism) and the strength of those interactions."

Allesina says that he and Tang intend to further improve their ecosystem model by embedding into it well-known interactions that exist between particular species. He also says that the insights gleaned through this study may be used to improve models of other types of networks that are unrelated to ecology, such as various types of gene regulatory networks and chemical reactions.

Remarkably, Allesina says that he and Tang cracked the biodiversity mystery without supercomputers or other high-tech instruments that are so frequently at the core of current biological discoveries: "We did the necessary calculations with just a pen and paper after finding a 1988 article on quantum physics that gave us the key to crack the problem."
Contacts and sources:
Lily Whiteman, National Science Foundation
Robert Mitchum, University of Chicago Medicine
on February 21, 2012