Researchers have discovered that a strain of methicillin-resistant Staphylococcus aureus (MRSA) bacteria that humans contract from livestock was originally a human strain, but it developed resistance to antibiotics once it was picked up by farm animals. The findings, which appear in the online journal mBio® on Tuesday, February 21, illustrate a very close link between antibiotic use on the farm and potentially lethal human infections. 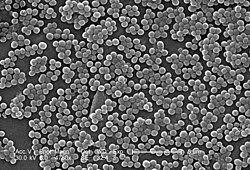 MRSA is the well-known cause of a variety of invasive skin infections that can quickly turn life-threatening, but in 2003 a novel form of MRSA called ST398 emerged in livestock. Today, ST398 regularly infects farm workers and others who come into contact with infected livestock with any of several types of acute infections, including skin and soft tissue infections, respiratory infections, and bacteremia (also called sepsis). The strain can now be found in pigs, turkeys, cattle, and other livestock and has been detected in 47% of meat samples in the U.S.

It has been thought that overuse of antibiotics in livestock production could be fueling antibiotic resistance in bacteria, including S. aureus. In 2001, the Union of Concerned Scientists estimated that livestock producers in the U.S. used 24.6 million pounds of antibiotics per year for non-therapeutic purposes, a controversial practice that has now been banned in the European Union.

The study appearing in mBio® draws a line between the exposure of S. aureus to antibiotics on farms and the development of a form of MRSA that can threaten human lives, a correlation that has long been suspected but has been difficult to study directly.

A team of researchers from the Translational Genomics Research Institute (TGen) in Flagstaff, Arizona, the Statens Serum Institut in Denmark, and several other institutions sequenced the genomes of 88 different S. aureusisolates that are all closely related to ST398 to determine the family relationships among antibiotic sensitive strains and antibiotic-resistant strains from both humans and animals.

An analysis of the various genomes revealed that ST398 most likely evolved from an antibiotic-sensitive strain of S. aureus that came from humans. Once it found a home in livestock, the genome sequences indicate this strain changed rapidly, acquired some new genes, and differentiated into many different types, including ST398, which is resistant to a few different antibiotics.

"Most of the ancestral human strains were sensitive to antibiotics, whereas the livestock strains had acquired resistance on several independent occasions," says Ross Fitzgerald of the University of Edinburgh in Scotland, who reviewed the paper for mBio®. This implies that the bacterium picked up the ability to fend off antibiotics after it migrated into livestock, says Fitzgerald.

The fact that ST398 originally came from a human is significant, says Fitzgerald, because it shows that infection is a two-way street. "Intensive farming practices could promote the transfer of bacteria between different host species including humans to animals," says Fitzgerald. ST398's family tree shows that sharing bacteria with livestock could well mean that those bacteria come back to us with the ability to defeat antibiotics.

mBio® is an open access online journal published by the American Society for Microbiology to make microbiology research broadly accessible. The focus of the journal is on rapid publication of cutting-edge research spanning the entire spectrum of microbiology and related fields. It can be found online athttp://mbio.asm.org.

The American Society for Microbiology is the largest single life science society, composed of over 39,000 scientists and health professionals. ASM's mission is to advance the microbiological sciences as a vehicle for understanding life processes and to apply and communicate this knowledge for the improvement of health and environmental and economic well-being worldwide.
Contacts and sources:
Garth Hogan
American Society for Microbiology
on February 21, 2012