A team of researchers has found a way to ensure that your evening glass of wine will continue to be available, despite the potential attack of Xylella fastidiosa (Xf), a bacterium that causes Pierce’s Disease and poses a significant threat to the California wine industry’s valuable grapevines. 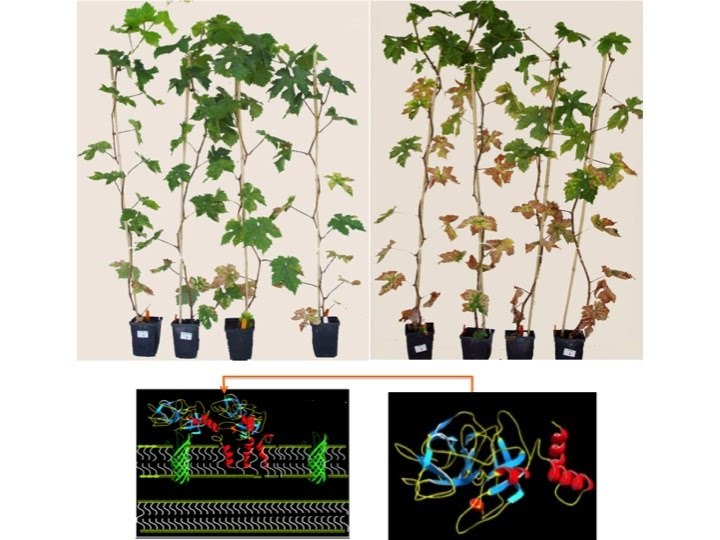 Their research is published in the current edition of Proceedings of the National Academy of Sciences, "An engineered innate immune defense protects grapevines from Pierce’s disease," by Abhaya M. Dandekar, et al. The article’s online tracking number is 2011-16027R in the PNAS Early Edition to be published the week of Feb. 20, 2012.

By helping the vine fight the microbe with specific proteins, the scientists envision vineyards requiring less reliance on chemicals as growers seek to fend off the bacterium and the glassy-winged sharpshooter (Homalodisca vitripennis) insect that carries it. As the insect feeds on various plants, it distributes the microbe widely.

The key to the project’s success is the fact that early in an Xf infection, molecules on the outer membrane of the microbe interact with cells of the grapevine. By interfering with that interaction between microbe and vine, scientists can help the vines block the disease and go on to produce a healthy crop of grapes.

"One thing got us started: with almost any pathogen, the major problem is drug resistance," said Goutam Gupta, the corresponding author of the PNAS paper. "We wanted the plant to clear itself of the pathogen before it is infected, much as the body’s immune system naturally recognizes a pathogen and takes action to defeat it."

To make the effective protein, researchers fused two genes: one that encodes a protein to cut a specific molecule on the outer membrane of Xf, and another that triggers the bursting of the Xf bacterium’s outer wall, called lysis.

The team inserted the hybrid gene into grapevines and observed the plants’ response to Xf infection. "The hybrid protein apparently creates pores in the membrane of the Gram-negative bacterium, Xf," said Gupta, thus allowing the plant to fight back the infection. Sap from the engineered plants successfully killed Xf in laboratory tests, and the whole plants did not exhibit symptoms of Pierce’s disease after exposure to the Xf bacterium.

Work on this project has been funded by the California Department of Food & Agriculture, the US Department of Agriculture - Agricultural Research Service, the LANL Center for Biosecurity Science, and the LANL Material Design Institute.