Major Discovery: Neuroscientists Identify How The Brain Works To Select What We (Want To) See

Use of diffusion spectrum imaging, pioneered in Pittsburgh, enabled major discovery. If you are looking for a particular object — say a yellow pencil — on a cluttered desk, how does your brain work to visually locate it?

For the first time, a team led by Carnegie Mellon University neuroscientists has identified how different neural regions communicate to determine what to visually pay attention to and what to ignore. This finding is a major discovery for visual cognition and will guide future research into visual and attention deficit disorders.

The three colors demonstrate one-to-one mapping from the first place visual information comes from the eyes and its path to the parietal cortex. 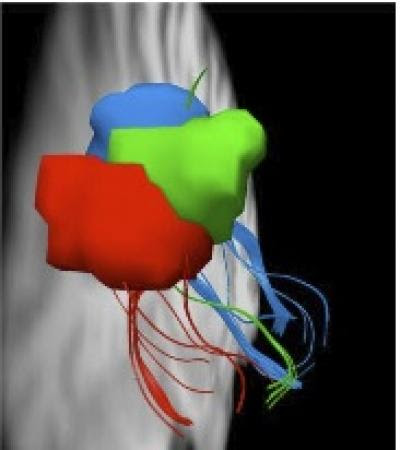 The study, published in the Journal of Neuroscience, used various brain imaging techniques to show exactly how the visual cortex and parietal cortex send direct information to each other through white matter connections in order to specifically pick out the information that you want to see.

"We have demonstrated that attention is a process in which there is one-to-one mapping between the first place visual information comes from the eyes into the brain and beyond to other parts of the brain," said Adam S. Greenberg, postdoctoral fellow in the Dietrich College of Humanities and Social Sciences' Department of Psychology and lead author of the study.

"With so much information in the visual world, it's dramatic to think that you have an entire system behind knowing what to pay attention to," said Marlene Behrmann, professor of psychology at CMU and a renowned expert in using brain imaging to study the visual perception system. "The mechanisms show that you can actually drive the visual system — you are guiding your own sensory system in an intelligent and smart fashion that helps facilitate your actions in the world."

For the study, the research team conducted two sets of experiments with five adults. They first used several different functional brain scans to identify regions in the brain responsible for visual processing and attention. One task had the participants look at a dot in the center of the screen while six stimuli danced around the dot. The second task asked the participants to respond to the stimuli one at a time. These scans determined the regions in both the visual and parietal cortices. The researchers could then look for connectivity between these regions.

The second part of the experiment collected anatomical data of the brain's white matter connectivity while the participants had their brains scanned without performing any tasks. Then, the researchers combined the results with those from the functional experiments to show how white matter fibers tracked from the regions determined previously, the visual cortex and the parietal cortex. The results demonstrated that the white matter connections are mapped systematically, meaning that direct connections exist between corresponding visual field locations in visual cortex and parietal cortex.

The researchers used a technique called "diffusion spectrum imaging," a new procedure pioneered at Carnegie Mellon and the University of Pittsburgh to generate the fiber tracts of the white matter connectivity. This method was combined with high-resolution tractography and provides scientists with better estimates of the hard-wired connections between brain regions and increased accuracy over conventional tractography methods, such as those typically used with diffusion tensor imaging.

"The work done in collaboration with the University of Pittsburgh researchers exploits a very new, precise and cutting edge methodology," Behrmann said.

"Because we know that training can alter white matter, it might be possible, through training, that the ability to filter out irrelevant or unwanted information could be improved," Greenberg said.

The National Institutes of Health funded this research.