This skeleton is a composite from the University of California Museum of Paleontology. 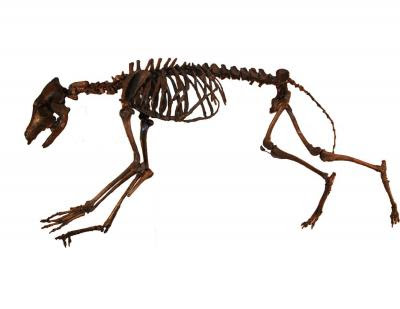 Coyotes today are pint-sized compared to their Ice Age counterparts, finds a new fossil study. Between 11,500 and 10,000 years ago — a mere blink of an eye in geologic terms — coyotes shrunk to their present size. The sudden shrinkage was most likely a response to dwindling food supply and changing interactions with competitors, rather than warming climate, researchers say.

In a paper appearing this week in Proceedings of the National Academy of Sciences, researchers studied museum collections of coyote skeletons dating from 38,000 years ago to the present day. It turns out that between 11,500 and 10,000 years ago, at the end of a period called the Pleistocene, coyotes in North America suddenly got smaller.

"Pleistocene coyotes probably weighed between 15-25 kilograms, and overlapped in size with wolves. But today the upper limit of a coyote is only around 10-18 kilograms," said co-author Julie Meachen of the National Evolutionary Synthesis Center in Durham, North Carolina.

"Within just over a thousand years, they evolved into the smaller coyotes that we have today," she added.

What caused coyotes to shrink? Several factors could explain the shift. One possibility is warming climate, the researchers say. Between 15,000 and 10,000 years ago, global average annual temperatures quickly rose by an average of six degrees. "Things got a long warmer, real fast," Meachen said.

Large animals are predicted to fare worse than small animals when temperatures warm up. To find out if climate played a role in coyotes' sudden shrinkage, Meachen and co-author Joshua Samuels of John Day Fossil Beds National Monument in Oregon measured the relationship between body size and temperature for dozens of Ice Age coyotes, and for coyotes living today, using thigh bone circumference to estimate body size for each individual.

But when they plotted body size against coldest average annual temperature for each animal's location, they found no relationship, suggesting that climate change was unlikely to be the main factor.

If the climate hypothesis is true, then we should see similar changes in other Ice Age carnivores too, Meachen added. The researchers also studied body size over time in the coyote's larger relative, the wolf, but they found that wolf body sizes didn't budge. "We're skeptical that climate change at the end of the Pleistocene was the direct cause of the size shift in coyotes," Meachen said.

This is a modern coyote and a Pleistocene coyote skull.

Another possibility is that humans played a role. In this view, coyotes may have shrunk over time because early human hunters —believed to have arrived in North America around 13,000 years ago — selectively wiped out the bigger coyotes, or the animals coyotes depended on for food, leaving only the small to survive. Stone tool butchery marks on Ice Age animal bones would provide a clue that human hunters had something to do with it, but the fossil record has turned up too few examples to test the idea. "Human hunting as the culprit is really hard to dispute or confirm because there's so little data," Meachen said.

A third, far more likely explanation, is dwindling food supply and changing interactions with competitors, the researchers say. Just 1000 years before the sudden shrinkage in coyotes, dozens of other species were wiped out in a wave of extinctions that killed off many large mammals in North America. Until then, coyotes lived alongside a great diversity of large prey, including horses, sloths, camels, llamas and bison. "There were not only a greater diversity of prey species, but the species were also more abundant. It was a great food source," Meachen said.

While coyotes survived the extinctions, there were fewer large prey left for them to eat. Smaller individuals that required less food to survive, or could switch to smaller prey, would have had an advantage.

Before the die-off, coyotes also faced stiff competition for food from other large carnivores, including a bigger version of wolves living today called the dire wolf. After bigger carnivores such as dire wolves went extinct, coyotes would have no longer needed their large size to compete with these animals for food.

The findings are important because they show that extinction doesn't just affect the animals that disappear, the researchers say — it has long-term effects on the species that remain as well.

"In a time of increasing loss of biodiversity, understanding the degree to which species interactions drive evolutionary change is important," says Saran Twombly, program director in the National Science Foundation (NSF)'s Division of Environmental Biology, which supported the research.

"Species interactions are delicate balancing acts. When species go extinct, we see the signature of the effects on the species that remain," Meachen said.

CITATION: Meachen, J. and J. Samuels (2012). "Evolution in coyotes (Canis latrans) in response to the megafaunal extinctions." Proceedings of the National Academy of Sciences.

The National Evolutionary Synthesis Center (NESCent) is a nonprofit science center dedicated to cross-disciplinary research in evolution. Funded by the National Science Foundation, NESCent is jointly operated by Duke University, The University of North Carolina at Chapel Hill, and North Carolina State University. For more information about research and training opportunities at NESCent, visit www.nescent.org.