Even In Winter, Life Persists In Arctic Seas

Results of research cruise to Bering, Chukchi and Beaufort seas surprise scientists and may have implications for climate modeling.

Despite brutal cold and lingering darkness, life in the frigid waters off Alaska does not grind to a halt in the winter as scientists previously suspected. According to preliminary results from a National Science Foundation- (NSF) funded research cruise, microscopic creatures at the base of the Arctic food chain are not dormant as expected.

After working aboard the U.S. Coast Guard icebreaker Healy for six weeks in waters where winds sometimes topped 70 knots, wind chills fell to -40 degrees and samples often had to be hustled safely inside before seawater froze to the deck, researchers are back in their labs, assembling for the first time a somewhat unexpected picture of how microscopic creatures survive winter in the Bering, Chukchi and Beaufort seas.

Although they have much more work to do before publishing their results, they say they are surprised on a number of fronts, including the discovery of active zooplankton--microscopic organisms that drift or wander in ocean, seas or bodies of fresh water.

"The zooplankton community seemed to be quite active, said Carin Ashjian of the Woods Hole Oceanographic Institution, the chief scientist on the expedition. "They were feeding at low rates. That was a surprise."

This image shows the USCGC Healy breaking through the Bering Sea waves. 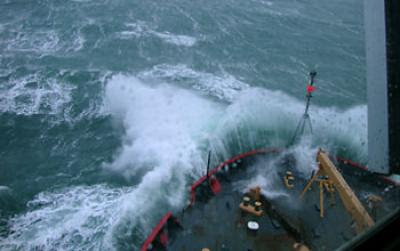 Ashjian is scheduled to discuss the preliminary results from the cruise during a session at the American Geophysical Union's 2012 Ocean Sciences Meeting in Salt Lake City, Utah this week.

Although perhaps arcane to non-scientists, the kinds of information gathered by the researchers previously was unattainable and is vital if scientists are to understand how a changing climate in the Arctic might affect the food chain, which extends upward from zooplankton through marine mammals to, eventually, subsistence hunters.

The ecological balance--and potential changes in that balance--of the northern waters potentially has large repercussions for commercial fisheries. The Bering Sea, for example, supports one of the world's most productive fisheries.

"This kind of research is really improving our fundamental understanding of this very important part of the ocean and giving us new information that we can put to use both in numerical models that are used to investigate ecosystem responses to environmental changes, but also in scientists' conceptual models of how these ecosystems really function," Ashjian said.

But, Ashjian noted, as the researchers, including scientists from the University of Rhode Island and the University of Alaska Fairbanks, were working in an area of the globe that is poorly understood by scientists even in the warmest months of the year and seldom visited in winter, discovery was one object of the expedition.

"Our understanding of biological and physical processes during the winter in the Arctic is severely limited because it is so difficult to access these winter seas," Ashjian said. "In particular, understanding of the overwintering strategies of one of the dominant copepod species in the region is not well understood."

Copepods are crustaceans that form a link in the food web between the primary-producing phytoplankton and the plankton-feeding fish as well as being important prey for large baleen whales--such as the bowhead--in the Arctic.

In spite of the challenges associated with working in severe weather and in the sea ice, the cruise was highly successful. In the Chuckchi Sea more sampling stations than originally planned were occupied, even though sea ice was forming as the cruise progressed and almost all of the stations in the Chukchi Sea were occupied in ice cover. Ocean-water temperatures were near the freezing point of seawater at all depths, with little to no stratification of the water column on the shallower shelves.

"This was a remarkably productive cruise, especially given the conditions under which these scientists were working," said William Wiseman, Natural Sciences Program Manager in the Office of Polar Programs' Division of Arctic Sciences at NSF. "It is easy to forget that, even in the early part of the 21st century, much of the globe remains unexplored by science. As a result, cruises like this are able to produce fundamental and vital knowledge about complex ecological systems; which is why NSF supports exactly this kind of research at the intellectual and physical frontiers."

Technology aboard the Healy also allowed the ship to do what earlier Polar explorers--and even Ashjian's colleagues a few years ago--could not; share their experience with students ashore.

Chantelle Rose, who teaches at Graham High School in St. Paris, Ohio, joined the cruise as part of the NSF-funded PolarTREC (Teacher and Researchers Collaborating and Exploring) program.

She posted on-line journals from the ship and communicated remotely with students, activities that are both in keeping with NSF's goal of combining research and education.

"I know that we need to engage the younger generation in science, but working scientists generally are not great teachers," Ashjian said. "Whenever I always go into a classroom, I worry that I am not always effective. That's a big concern for me. So I like this partnership: I think that this is a good way to get science out into the classroom."

What they continue to learn from specimens and data gathered on the cruise, which wrapped up in January may well change scientific conceptions of how animals at the bottom of the Arctic food chain persist through the Arctic winter and help scientists to improve models designed to predict the effects of a changing climate.