The ability to anticipate future events allows us to plan and exert control over our lives, but it may also contribute to stress-related increased risk for the diseases of aging, according to a study by UCSF researchers.

This is Elissa Epel, Ph.D. 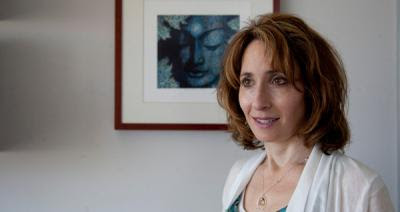 In a study of 50 women, about half of them caring for relatives with dementia, the psychologists found that those most threatened by the anticipation of stressful tasks in the laboratory and through public speaking and solving math problems, looked older at the cellular level. The researchers assessed cellular age by measuring telomeres, which are the protective caps on the ends of chromosomes. Short telomeres index older cellular age and are associated with increased risk for a host of chronic diseases of aging, including cancer, heart disease and stroke.

"We are getting closer to understanding how chronic stress translates into the present moment," said Elissa Epel, PhD, an associate professor in the UCSF Department of Psychiatry and a lead investigator on the study. "As stress researchers, we try to examine the psychological process of how people respond to a stressful event and how that impacts their neurobiology and cellular health. And we're making some strides in that."

This is Aoife O'Donovan, Ph.D.

The researchers also found evidence that caregivers anticipated more threat than non-caregivers when told that they would be asked to perform the same public speaking and math tasks. This tendency to anticipate more threat put them at increased risk for short telomeres. Based on that, the researchers propose that higher levels of anticipated threat in daily life may promote cellular aging in chronically stressed individuals.

"How you respond to a brief stressful experience in the laboratory may reveal a lot about how you respond to stressful experiences in your daily life," said Aoife O'Donovan, PhD, a Society in Science: Branco Weiss Fellow at UCSF and the study's lead author. "Our findings are preliminary for now, but they suggest that the major forms of stress in your life may influence how your respond to more minor forms of stress, such as losing your keys, getting stuck in traffic or leading a meeting at work. Our goal is to gain better understanding of how psychological stress promotes biological aging so that we can design targeted interventions that reduce risk for disease in stressed individuals. We now have preliminary evidence that higher anticipatory threat perception may be one such mechanism."

The study will be published in the May issue of the journal Brain, Behavior and Immunity.

Research on telomeres, and the enzyme that makes them, was pioneered by three Americans, including UCSF molecular biologist and co-author on this manuscript Elizabeth Blackburn, PhD, who co-discovered the telomerase enzyme in 1985. The scientists received the Nobel Prize in Physiology or Medicine in 2009 for this work.

The research related to anticipation was funded by grants from the Division of Behavioral and Social Research at the National Institute of Aging/National Institutes of Health and Bernard and Barbro Foundation as well as by a Society in Science: Branco Weiss Fellowship.