Seriously, We're Poisonous: Coloration Is An Honest Signal Of Toxicity In Poison Frogs

The conspicuous colors of poisonous frogs serve as a warning to predators: Don't eat me; I'm toxic. And a new study shows that in the case of at least one frog species, they aren't bluffing—the more conspicuous the color, the more poisonous the frog. Researchers Martine Maan (University of Groningen, the Netherlands) and Molly Cummings (University of Texas) studied strawberry poison dart frogs, which are native to Panama and come in more than a dozen different color patterns that vary from region to region.

This map shoes the distribution of strawberry poison dart frogs (Dendrobates pumilio) color morphs in the Bocas del Toro archipelago, Panama. New research shows that the conspicuousness of a frog's color pattern -- as seen by birds -- corresponds to its toxicity. 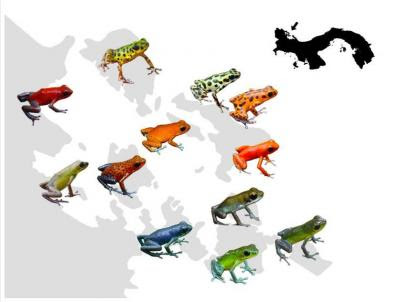 Maan and Cummings tested the toxicity levels of 10 differently colored frog populations. Then using known properties of birds' visual systems, the researchers estimated how each color pattern would look to a bird, an important frog predator. The results show that frogs with more conspicuous color patterns—as seen by birds—tended to be more toxic. The findings suggest that "birds can predict the toxicity of frogs by looking at their colors, possibly better than the frogs can themselves," Maan said.

This is a strawberry poison dart frog from Isla Bastimentos. New research shows that the conspicuousness of a frog's color pattern -- as seen by birds -- corresponds to its toxicity. 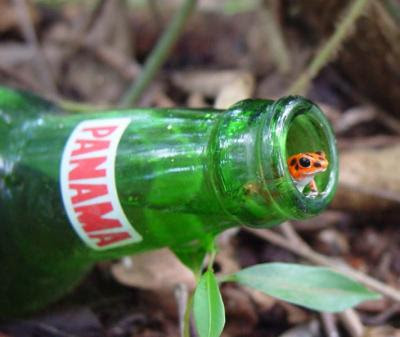 
Bright Eyes: How butterflies recognize their compatriots in a world of mimics

Several species of butterflies have evolved a resemblance to butterflies from the genus Heliconius, which are toxic and bad-tasting to avian predators. The mimics' resemblance to their toxic cousins helps keep the birds at bay, but if the disguises are good enough to fool predators, how do the butterflies themselves tell who's who when it comes time for mating? The answer, according to research led by Seth Bybee (U.C. Irvine and BYU), is ultraviolet pigment—and the ability to distinguish it.

These are different butterflies photographed in daylight (first and second rows) and through an ultraviolet filter (third row). Heliconius (left) are colorful in the ultraviolet while those of mimetic Eueides (right) are colorful only in visible light. New research suggests that the ability of Heliconius butterflies to detect ultraviolet color could help them identify their compatriots in a world of mimics. 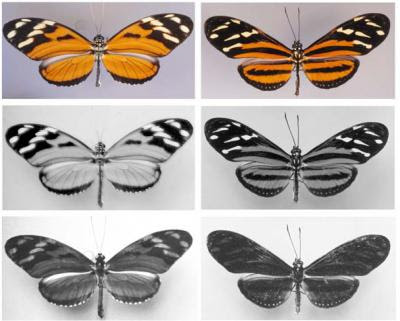 Bybee and his colleagues found that some species of Heliconius have two copies of a gene known as the UV opsin gene. "Opsins are part of the visual pigments that allow animals to see, and the duplicated genes allow Heliconius to discriminate ultraviolet colors better than other butterflies," Bybee said. Heliconiuswings also reflect ultraviolet-yellow, the researchers found, making them conspicuous to the Heliconius visual system, but not to the visual systems of other butterflies. "The enhanced ultraviolet vision, together with the ultraviolet-yellow wing pigments may allow poisonous Heliconius butterflies a private communication channel for members of their own species, while still allowing butterflies to fool their predators," Bybee said.

When the parasitic fly Microdon mutabilis infects an ant colony, its larvae feed on the colony's unhatched eggs and young larvae, significantly reducing the size of the brood. While this might sound unequivocally like a bad thing, there's an unexpected upside. Colonies infected by the parasite have been shown to produce more new queens, which could be critical to a colony's fitness. Now a research team led by Thomas Hovestadt (University of Wuerzburg, Germany) has developed a theoretical model that illustrates how this happens.

The model posits that as some young ant larvae are eaten by the fly larvae, the colony shifts food provisions to the survivors. The better-provisioned larvae are then more likely to become queens. At the same time, by reducing the size of the brood, the parasite keeps the colony from producing more brood than it needs. The model makes several predictions about how the dynamics of this relationship should play out over time, most of which are well supported by field observations of colonies. It's the first time such a model has been developed to explore consequences of parasitism at the colony level, Hovestadt says.

A rough start in life could lead to duller plumage for some birds, a study by Oxford researchers Simon Evans and Ben Sheldon suggests. The research focused on great tits, a small garden bird common across Europe. The birds are distinguishable by their yellow chest feathers, but the color can vary from a vibrant yellow to a duller, almost grayish shade.

Evans and Sheldon wanted to see if this color variation was a result of genetic or environmental factors. Genetic testing of great tits showed that while genes play a role in plumage color, they don't tell the whole story. Observations from more than 500 nest boxes in Bagley Woods in the U.K. showed that birds from larger broods, and those that were hatched later in the breeding season tended to have duller chest feathers. "Plumage coloration is often considered to be determined by short-term factors," Evans said. "But our study shows that conditions experience in the nest have a long-term effect on coloration that persists throughout adulthood, despite feathers being replaced and grown afresh every year."