Just in time for the holidays, astronomers have come across a new image from NASA's Wide-field Infrared Survey Explorer, or WISE, that some say resembles a wreath. You might even think of the red dust cloud as a cheery red bow, and the bluish-white stars as silver bells. This star-forming nebula is named Barnard 3. Baby stars are being born throughout the dusty region, while the "silver bell" stars are located both in front of, and behind, the nebula.

The bright star in the middle of the red cloud, called HD 278942, is so luminous that it is likely causing most of the surrounding clouds to glow. The red cloud is probably made of dust that is more metallic and cooler than the surrounding regions. The yellow-green region poking into the picture from the left like a sprig of holly is similar to the rest of the green "wreath" material, only more dense.

NASA's Wide-field Infrared Survey Explorer (WISE) mission presents the "Wreath nebula." Though this isn't the nebula's official name (it's actually called Barnard 3, or IRAS Ring G159.6-18.5), one might picture a wreath in these bright green and red dust clouds -- a ring of evergreens donned with a festive red bow, a jaunty sprig of holly, and silver bells throughout. Interstellar clouds like these are stellar nurseries, places where baby stars are being born. 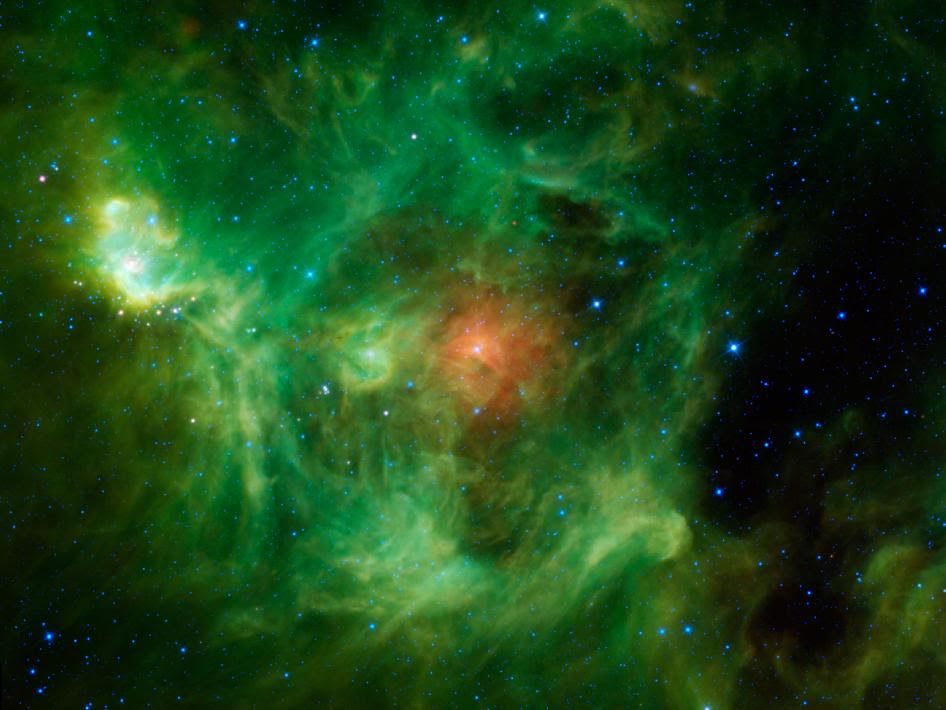 The green ring (evergreen) is made of tiny particles of warm dust whose composition is very similar to smog found here on Earth. The red cloud (bow) in the middle is probably made of dust that is more metallic and cooler than the surrounding regions. The bright star in the middle of the red cloud, called HD 278942, is so luminous that it is likely what is causing most of the surrounding ring to glow. In fact its powerful stellar winds are what cleared out the surrounding warm dust and created the ring-shaped feature in the first place. The bright greenish-yellow region left of center (holly) is similar to the ring, though more dense. The bluish-white stars (silver bells) scattered throughout are stars located both in front of, and behind, the nebula.

Regions similar to this nebula are found near the band of the Milky Way galaxy in the night sky. The "wreath" is slightly off this band, near the boundary between the constellations of Perseus and Taurus, but at a relatively close distance of only about 1,000 light-years, the cloud is a still part of our Milky Way.