If the study published in The Journal of Infectious Diseases is borne out in future investigations, it may lead to better ways to treat one of the world’s major infectious diseases. Health workers worldwide currently are required to witness each administration of the combination of drugs during months of therapy. 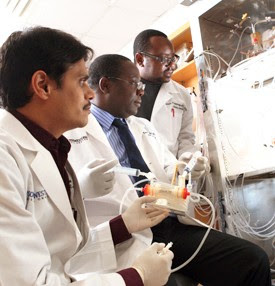 “Tuberculosis is a common ailment, accounting for up to 3 percent of all deaths in many countries. Although effective therapy exists, there are still cases of treatment failure and drug resistance remains a threat,” said Dr. Tawanda Gumbo, associate professor of internal medicine and senior author of the study.

The results seem to challenge the current approach endorsed by the World Health Organization. Under that method, directly observed therapy-short-course strategy (DOTS), TB that responds to medication is treated with a cocktail of drugs under the supervision of health care workers, who in many countries must travel to isolated villages – a costly and time-consuming process.

“Every TB patient is supposed to be watched as they swallow their pills in order to increase adherence and decrease emergence of drug resistance. This is the most expensive part of the program, but has been felt to be cost-effective since it improves compliance,” said Dr. Gumbo, administrative director of research programs for the Office of Global Health at UT Southwestern.

In this study, UT Southwestern researchers created a sophisticated system of high-tech test tubes, which they called a “glass mouse,” that mimicked standard therapy being given daily for 28 to 56 days, with dosing adherence varying between 0 percent and 100 percent. The threshold for defined non-adherence (failure to take a required dose of medication) was reached at 60 percent of the time or more.

In fact, using computer simulations based on 10,000 TB patients in Cape Town, South Africa, the researchers discovered that approximately 1 percent of all TB patients with perfect adherence still developed drug resistance because they cleared the drugs from their bodies more quickly.

The body sees drugs as foreign chemicals and tries to rid itself of them, Dr. Gumbo said. A population of individuals with a genetic trait that speeds the process has been found in one area of South Africa that has a high rate of multidrug-resistant TB. In that population, patients who receive standard doses of drugs end up with concentrations in their bodies that are too low to kill the TB bacillus and drug resistance develops, he said.

A Journal of Infectious Diseases editorial that accompanies the study suggests that monitoring the levels of TB drugs in a patient’s blood could be as important as monitoring compliance with therapy – in contrast to current WHO guidelines.

“These data, based on our preclinical model, show that non-adherence alone is insufficient for the emergence of multidrug-resistant TB,” Dr. Gumbo said. “It might be more cost-effective to measure patients’ drug concentrations during treatment and intervene with dosage increases in those who quickly clear the drugs from their systems.”