Speed Of Evolution: Salmon Changed In A Single Generation

The impact of hatcheries on salmonids is so profound that in just one generation traits are selected that allow fish to survive and prosper in the hatchery environment, at the cost of their ability to thrive and reproduce in a wild environment. 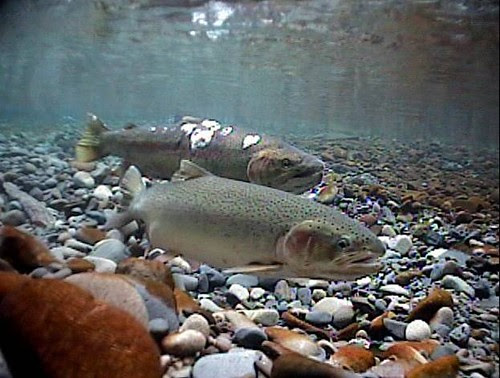 The findings, published in Proceedings of the National Academy of Sciences, show a speed of evolution and natural selection that surprised researchers.

They confirmed that a primary impact of hatcheries is a change in fish genetics, as opposed to a temporary environmental effect.

“We’ve known for some time that hatchery-born fish are less successful at survival and reproduction in the wild,” said Michael Blouin, a professor of zoology at Oregon State University. “However, until now, it wasn’t clear why. What this study shows is that intense evolutionary pressures in the hatchery rapidly select for fish that excel there, at the expense of their reproductive success in the wild.”

Hatcheries are efficient at producing fish for harvest, the researchers said, but this and other studies continue to raise concerns about the genetic impacts that hatchery fish may have when they interbreed with wild salmon and steelhead, and whether or not they will help wild salmonid runs to recover.

These findings were based on a 19-year genetic analysis of steelhead in Oregon’s Hood River. It examined why hatchery fish struggle to reproduce in wild river conditions, a fact that has been made clear in previous research. Some of the possible causes explored were environmental effects of captive rearing, inbreeding among close relatives, and unintentional “domestication selection,” or the ability of some fish to adapt to the unique hatchery environment.

The study confirmed that domestication selection was at work.

When thousands of smolts are born in the artificial environment of a hatchery, those that survive best are the ones that can deal, for whatever reason, with hatchery conditions. But the same traits that help them in the hatchery backfire when they return to a wild river, where their ability to produce surviving offspring is much reduced.

“We expected to see some of these changes after multiple generations,” said Mark Christie, an OSU post-doctoral research associate and lead author on the study. “To see these changes happen in a single generation was amazing. Evolutionary change doesn’t always take thousands of years.”

It’s not clear exactly what traits are being selected for among the thousands of smolts born in hatcheries, the scientists said, but one of the leading candidates is the ability to tolerate extreme crowding. If research can determine exactly what aspect of hatchery operations is selecting for fish with less fitness in the wild, it could be possible to make changes that would help address the problem, they said.

Historically, hatchery managers preferred to use fish born in hatcheries as brood stock to create future generations, because whatever trait they had that allowed them to succeed in the hatchery helped produce thousands of apparently healthy young salmon. But they later found that when those same fish were released they had a survival and reproductive success that was far lower than those born in the wild.

Billions of captive-reared salmon are intentionally released into the wild each year in order to increase fishery yields and bolster declining populations. The steelhead studied in this research are, in fact, listed as threatened under the Endangered Species Act, and part of their recovery plan includes supplementation with hatchery fish.

“It remains to be seen whether results from this one study on steelhead generalize to other hatcheries or salmon species,” Blouin said.

“Nevertheless, this shows that hatcheries can produce fish that are genetically different from wild fish, and that it can happen extraordinarily fast,” he said. “The challenge now is to identify the traits under selection to see if we can slow that rate of domestication.”