This composite image shows the central region of the spiral galaxy NGC 4151. X-rays (blue) from the Chandra X-ray Observatory are combined with optical data (yellow) showing positively charged hydrogen (H II) from observations with the 1-meter Jacobus Kapteyn Telescope on La Palma. The red ring shows neutral hydrogen detected by radio observations with the NSF's Very Large Array. This neutral hydrogen is part of a structure near the center of NGC 4151 that has been distorted by gravitational interactions with the rest of the galaxy, and includes material falling towards the center of the galaxy. The yellow blobs around the red ellipse are regions where star formation has recently occurred.

A recent study shows the X-ray emission probably was caused by an outburst powered by the supermassive black hole located in the white region in the center of the galaxy. Evidence for this idea comes from the elongation of the X-rays running from the top left to the bottom right and details of the X-ray spectrum. There are also signs of interactions between a central source and the surrounding gas, particularly the yellow arc of H II emission located above and to the left of the black hole.

NGC 4151 is located about 43 million light years away from the Earth and is one of the nearest galaxies that contains an actively growing black hole. Because of this proximity, it offers one of the best chances of studying the interaction between an active supermassive black hole and the surrounding gas of its host galaxy. Such interaction, or feedback, is recognized to play a key role in the growth of supermassive black holes and their host galaxies. If the X-ray emission in NGC 4151 originates from hot gas heated by the outflow from the central black hole, it would be strong evidence for feedback from active black holes to the surrounding gas on galaxy scales. This would resemble the larger scale feedback, observed on galaxy cluster scales, from active black holes interacting with the surrounding gas, as seen in objects like the Perseus Cluster. 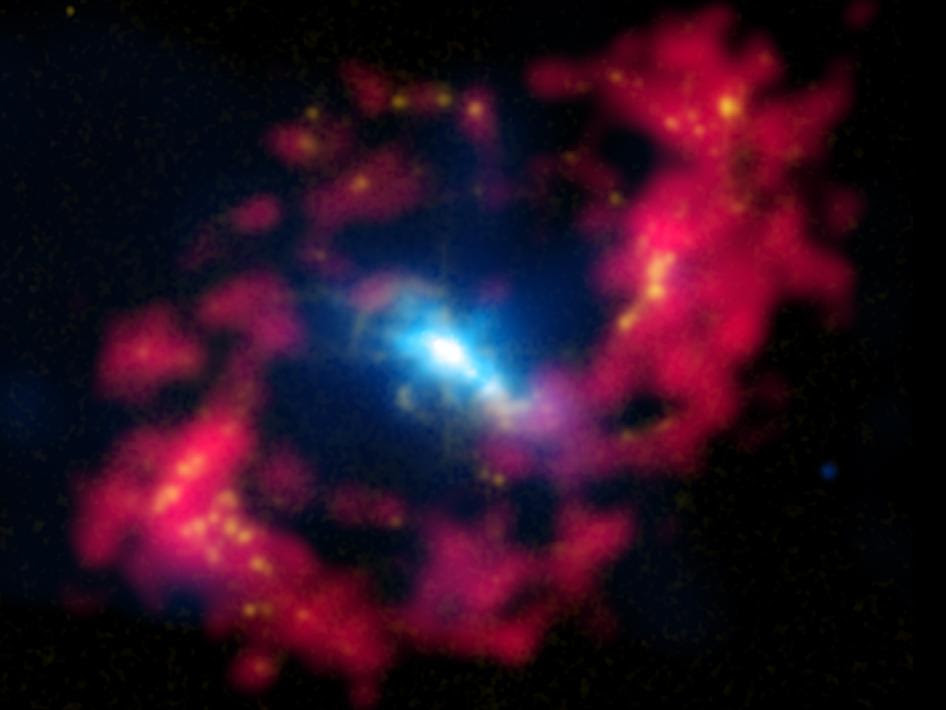 These results were published in the Aug. 20, 2010 issue of The Astrophysical Journal Letters. The authors were Junfeng Wang and Giuseppina Fabbiano from the Harvard Smithsonian Center for Astrophysics (CfA); Guido Risaliti from CfA and INAF-Arcetri Observatory, in Firenze, Italy; Martin Elvis from CfA; Carole Mundell from Liverpool John Moores University in Birkenhead, UK; Gaelle Dumas and Eva Schinnerer from the Max Planck Institute for Astrophysics in Heidelberg, Germany; and, Andreas Zezas from CfA and the University of Crete in Greece.