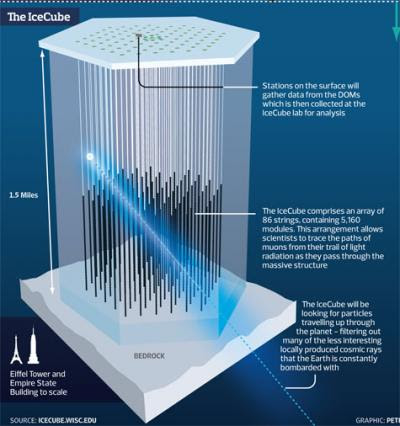 When an international collaboration of physicists came up with a result that punched a hole in Einstein's theory of special relativity and couldn't find any mistakes in their work, they asked the world to take a second look at their experiment.

Responding to the call was Ramanath Cowsik, PhD, professor of physics in Arts & Sciences and director of the McDonnell Center for the Space Sciences at Washington University in St. Louis.

Online and in the December 24 issue of Physical Review Letters, Cowsik and his collaborators put their finger on what appears to be an insurmountable problem with the experiment.

OPERA reported online and in Physics Letters B in September that the neutrinos arrived at Gran Sasso some 60 nanoseconds sooner than they would have arrived if they were traveling at the speed of light in a vacuum.

Neutrinos are thought to have a tiny, but nonzero, mass. According to the theory of special relativity, any particle that has mass may come close to but cannot quite reach the speed of light. So superluminal (faster than light) neutrinos should not exist.

The neutrinos in the experiment were created by slamming speeding protons into a stationary target, producing a pulse of pions — unstable particles that were magnetically focused into a long tunnel where they decayed in flight into muons and neutrinos.

The muons were stopped at the end of the tunnel, but the neutrinos, which slip through matter like ghosts through walls, passed through the barrier and disappeared in the direction of Gran Sasso.

In their journal article, Cowsik and an international team of collaborators took a close look at the first step of this process. "We have investigated whether pion decays would produce superluminal neutrinos, assuming energy and momentum are conserved," he says.

The OPERA neutrinos had energies of about 17 gigaelectron volts. "They had a lot of energy but very little mass," Cowsik says, "so they should go very fast." The question is whether they went faster than the speed of light.

"We've shown in this paper that if the neutrino that comes out of a pion decay were going faster than the speed of light, the pion lifetime would get longer, and the neutrino would carry a smaller fraction of the energy shared by the neutrino and the muon," Cowsik says.

"What's more," he says, "these difficulties would only increase as the pion energy increases.

"So we are saying that in the present framework of physics, superluminal neutrinos would be difficult to produce," Cowsik explains.

In addition, he says, there's an experimental check on this theoretical conclusion. The creation of neutrinos at CERN is duplicated naturally when cosmic rays hit Earth's atmosphere.

A neutrino observatory called IceCube detects these neutrinos when they collide with other particles generating muons that leave trails of light flashes as they plow into the thick, clear ice of Antarctica.

"IceCube has seen neutrinos with energies 10,000 times higher than those the OPERA experiment is creating," Cowsik says.."Thus, the energies of their parent pions should be correspondingly high. Simple calculations, based on the conservation of energy and momentum, dictate that the lifetimes of those pions should be too long for them ever to decay into superluminal neutrinos.

"But the observation of high-energy neutrinos by IceCube indicates that these high-energy pions do decay according to the standard ideas of physics, generating neutrinos whose speed approaches that of light but never exceeds it.

Cowsik's objection to the OPERA results isn't the only one that has been raised.

"We are saying that, given physics as we know it today, it should be hard to produce any neutrinos with superluminal velocities, and Cohen and Glashow are saying that even if you did, they'd quickly radiate away their energy and slow down," Cowsik says.

"I have very high regard for the OPERA experimenters," Cowsik adds. "They got faster-than-light speeds when they analyzed their data in March, but they struggled for months to eliminate possible errors in their experiment before publishing it.

"Not finding any mistakes," Cowsik says, "they had an ethical obligation to publish so that the community could help resolve the difficulty. That's the demanding code physicists live by," he says.