Just in time for those New Year's Eve toasts, which might include a farewell to the International Year of Chemistry, the world's largest scientific society today posted online a video on the chemistry of champagne. The latest addition to the award-winning Bytesize Science series from the American Chemical Society (ACS) is available at www.BytesizeScience.com.
New American Chemical Society video highlights the chemistry of champagne. 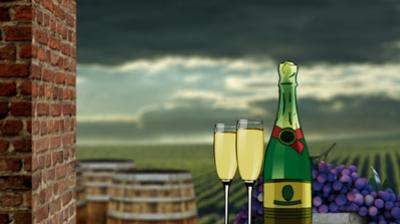 It explains that champagne, unlike other wines, undergoes a second fermentation in the bottle to trap carbon dioxide gas, which dissolves into the wine and forms the fabled bubbles in the bubbly. More than 600 different chemical compounds join carbon dioxide in champagne, each lending its own unique quality to the aroma and flavor of champagne.

But even with all of that flavor, champagne would be just another white wine without those tiny bubbles. As the bubbles ascend the length of a glass in tiny trains, they drag along molecules of those 600 flavor and aroma substances. They literally explode out of the surface as the bubbles burst, tickling the nose and stimulating the senses.

Some accounts say that a French Benedictine monk named Dom Pierre Pérignon discovered champagne in the mid-1600s, and became namesake for the famous champagne cuvée, Dom Pérignon. The video points out that early champagne makers had a tough time with that second fermentation. Some bottles wound up with no bubbles at all. Others got too much carbon dioxide, and exploded under the enormous pressure, wasting the precious vintage.

So what's the best way to pour a glass of bubbly and maximize the sensory experience?

For an answer, the video turns to a study published in the Journal of Agricultural and Food Chemistry, one of more than 40 peer-reviewed scientific journals published by the ACS. Pouring champagne on an angle retains up to twice as much carbon dioxide in the champagne when compared to pouring down the middle of the glass. Those additional bubbles carry out more of the hundreds of flavor compounds in champagne.