Small monkey groups may win territorial disputes against larger groups because some members of the larger, invading groups avoid aggressive encounters. In a new report published in Proceedings of the National Academy of Sciences, Margaret Crofoot and Ian Gilby of the Smithsonian Tropical Research Institute and the Max Planck Institute of Ornithology show that individual monkeys that don't participate in conflicts prevent large groups from achieving their competitive potential.

Cebus capuchinus: Is this monkey a wimp? A new study by Margaret Crofoot and Ian Gilby at the Smithsonian research station on Barro Colorado Island in Panama shows that the answer may depend on the size of the group it belongs to. 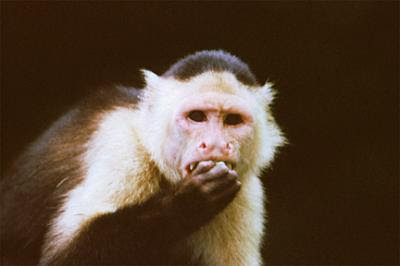 The authors used recorded vocalizations to simulate territorial invasions into the ranges of wild white-faced capuchin monkey groups at the Smithsonian reasearch station on Barro Colorado Island in Panama. Monkeys responded more vigorously to territorial challenges near the center of their territories and were more likely to flee in encounters near the borders.

Defection by members of larger groups was more common than defection by members of smaller groups. Groups that outnumbered their opponents could convert their numerical superiority to a competitive advantage when defending the center of their own range against neighboring intruders, but failed to do so when they attempted to invade the ranges of their neighbors, because more individuals in large groups chose not to participate. According to the authors, these behavior patterns even the balance of power among groups and create a 'home-field advantage' which may explain how large and small groups are able to coexist.

The Smithsonian Tropical Research Institute, headquartered in Panama City, Panama, is a unit of the Smithsonian Institution. The Institute furthers the understanding of tropical nature and its importance to human welfare, trains students to conduct research in the tropics and promotes conservation by increasing public awareness of the beauty and importance of tropical ecosystems. Website: http://www.stri.org.