A mysterious line where two millipede species meet has been mapped in northwest Tasmania, Australia. Both species are common in their respective ranges, but the two millipedes cross very little into each other's territory. The 'mixing zone' where they meet is about 230 km long and less than 100 m wide where carefully studied. 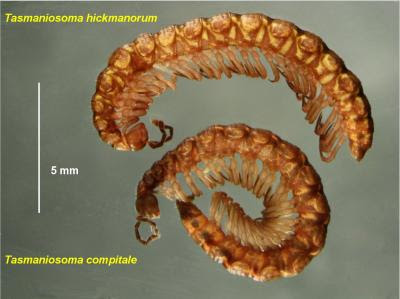 The mapping was done over a two-year period by Dr Bob Mesibov, who is a millipede specialist and a research associate at the Queen Victoria Museum and Art Gallery in Launceston, Tasmania. His results have been published in the open access journal ZooKeys.

'I have no idea why the line is so sharp', said Dr Mesibov. 'The boundary runs up and down hills, crosses rivers and different bedrocks and soils, and ignores vegetation type and climate differences. Its position and its sharpness seem to be the result of an unexplained biological arrangement between the two millipede species.'

Biogeographers use the term 'parapatry' for the case where two species ranges meet but do not overlap, or overlap very little. Dr Mesibov said that parapatry has been reported before in other species of millipedes and in other terrestrial invertebrate animals, in Tasmania and elsewhere in the world. However, parapatric boundaries often parallel a geographical feature, such as a ridgeline, or a steep rainfall gradient.

This is the border between the two species of millipedes. 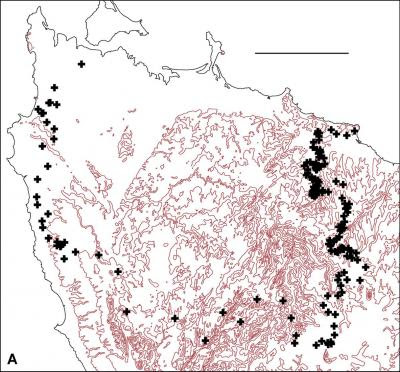 'There does not seem to be an ecological or a geographic explanation for this particular boundary, or for any part of it. It is also longer than any other parapatric boundary I know about. At 230 km, it is 50% longer than the boundary between England and Scotland, and the 'border control' is a lot better than what we humans can do.'

The two millipede species, Tasmaniosoma compitale and T. hickmanorum, are in the same genus and thought to be closely related. They were first scientifically described in 2010, by the same author and again in ZooKeys. The parapatric boundary was mapped as a background study for later investigations of speciation in this group of millipedes, and of the mechanism of parapatry.