I Know Something You Don't Know -- And I Will Tell You!

Many animals produce alarm calls to predators, and do this more often when kin or mates are present than other audience members. So far, however, there has been no evidence that they take the other group members' knowledge state into account.

Researchers from the Max Planck Institute for Evolutionary Anthropology in Leipzig, Germany, and the University of St. Andrews, Great Britain, set up a study with wild chimpanzees in Uganda and found that chimpanzees were more likely to alarm call to a snake in the presence of unaware than in the presence of aware group members, suggesting that they recognize knowledge and ignorance in others. Furthermore, to share new information with others by means of communication represents a crucial stage in the evolution of language. This study thus suggests that this stage was already present when our common ancestor split off from chimps 6 million years ago.

Chimpanzees fear snakes. This one took refuge on a tree. 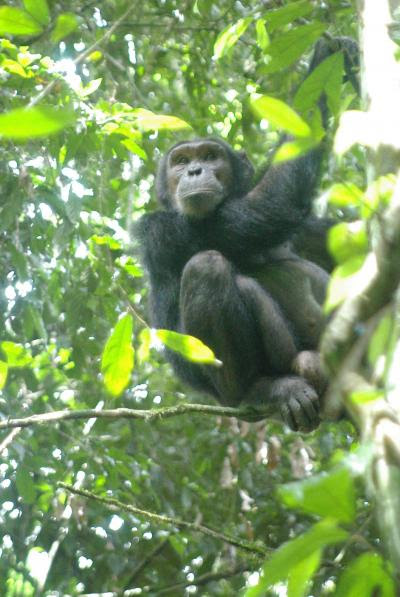 The ability to recognize another individuals' knowledge and beliefs may be unique to humankind. Tests of a "theory of mind" in animals have been mainly conducted in captivity and have yielded conflicting results: Some non-human primates can read others' intentions and know what others see, but they may not understand that, in others, perception can lead to knowledge. When there are negative results, however, the question remains whether chimpanzees really cannot do the task or whether they simply do not understand it. "The advantage of addressing these questions in wild chimpanzees is that they are simply doing what they always do in an ecologically relevant setting", says Catherine Crockford, a researcher at the University of St. Andrews.

Catherine Crockford, Roman Wittig and colleagues set up a study with wild chimpanzees in Budongo Forest, Uganda. They presented them with models of dangerous venomous snakes, two gaboon vipers and one rhinoceros viper. "As these highly camouflaged snakes sit in one place for weeks, it pays for the chimp who discovers it to inform other community members about the danger", says Crockford.

The researchers have monitored the behavior of 33 different chimpanzees, who saw one of three snake models and found that alarm calls were produced more when the caller was with group members who had either not seen the snake or had not been present when alarm calls were emitted. "Chimpanzees really seem to take another's knowledge state into account and voluntarily produce a warning call to inform the others of a danger that they [the others] do not know about", says Roman Wittig of the Max Planck Institute for Evolutionary Anthropology and the University of St. Andrews. "In contrast, chimpanzees were less likely to inform audience members who already know about the danger."

Some scientists suggest that providing group members with missing information by means of communication is a crucial stage in the evolution of language: why inform audience members if you do not realize they need the information? Until now it was not clear at what point in hominoid or hominid evolution this stage evolved. It has been assumed that it was more likely to be during hominid evolution. This study suggests, however, that it was already present when our common ancestor split off from chimps 6 million years ago.