Researchers from Singapore and the UK have jointly announced a new benchmark in broadband, non-linear optical-limiting behavior using single-sheet graphene dispersions in a variety of heavy-atom solvents and film matrices.

The new optical-induced absorption mechanisms [a] Photoexcitation of a dispersed graphene single sheet gives long-lived electron-hole pairs. Further excitation causes the appearance of localized states such as (i) excitons (neutral excited state) or (ii) polarons (charged excited state) due to interactions. [b] For comparison, graphite gives on electron-hole gas that is very short-lived due to fast cooling and re-combination. 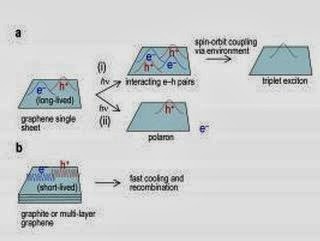 Graphenes are single sheets of carbon atoms bonded into a hexagonal array. In nature, they tend to stack to give graphite.

In a breakthrough, researchers from the National University of Singapore (NUS), DSO National Laboratories and University of Cambridge have developed a method to prevent the re-stacking of these sheets by attaching alkyl surface chains to them, while retaining the integrity of the nano-graphene pockets on the sheets.

This method in turn produced a material that can be processed in a solution and dispersible into solvents and film matrices. As a consequence, the researchers observed a new phenomenon. They found that the dispersed graphenes exhibit a giant non-linear optical-absorption response to intense nanosecond laser pulses over a wide spectral range with a threshold that was much lower than that found in carbon black suspensions and carbon nanotubes suspensions. This set a new record in energy limiting onset of 10 mJ/cm^2 for a linear transmittance of 70%.

The mechanism for this new phenomenon is outlined in Figure 1 in which the initially delocalized electron-hole gas localizes at high-excitation densities in the presence of heavy atoms, to produce strong absorbing excitons. The resultant excited-state absorption mechanism can be very effective.

These optical limiting materials can now be used for protection of sensitive sensors and devices from laser damage, and for optical circuits. They can be also used in anti-glare treated devices.

The principal investigator of the NUS Organic Nano Device Laboratory's graphene team, Professor Lay-Lay Chua who is also from the NUS Department of Chemistry and Department of Physics, says: "We found from ultrafast spectroscopy measurements that dispersed graphene sheets switch their behavior from induced optical transparency which is well-known, to induced optical absorption depending on its environment. This is a remarkable finding that shows graphene can still surprise!"

The principal investigator of the graphene team at DSO National Laboratories, Professor Geok-Kieng Lim who is also an Adjunct Professor at NUS Department of Physics, says: "This is an important first step in the development of practical graphene nano-composite films for applications where the graphene sheets remain fully dispersed. The induced change in their non-linear optical behavior is amazing and highly practical!"

About National University of Singapore (NUS)

A leading global university centred in Asia, the National University of Singapore (NUS) is Singapore's flagship university which offers a global approach to education and research, with a focus on Asian perspectives and expertise.

NUS has 16 faculties and schools across three campuses. Its transformative education includes a broad-based curriculum underscored by multi-disciplinary courses and cross-faculty enrichment. Over 36,000 students from 100 countries enrich the community with their diverse social and cultural perspectives.

NUS has three Research Centres of Excellence (RCE) and 21 university-level research institutes and centres. It is also a partner in Singapore's 5th RCE. NUS shares a close affiliation with 16 national-level research institutes and centres. Research activities are strategic and robust, and NUS is well-known for its research strengths in engineering, life sciences and biomedicine, social sciences and natural sciences. It also strives to create a supportive and innovative environment to promote creative enterprise within its community.
on December 30, 2011