Earthquake fog and clouds can cause ships to sink and planes to crash according to researcher Zhonghao Shou (Seattle, WA) who in U.S. Patent 8,068,985 reveals a method to predict an earthquake within one to two days by detecting hot vapors released from underground prior to a tremor. Shou believes earthquake clouds were responsible for numerous unexplained plane crashes including The Air France Flight 447 Crash,  The Iran B727 Crash, and The Ethiopian Boeing 737-800 Crash

According to Shou, the earthquake vapor theory, statistically significant in practice, overcomes two difficulties: the dependency on cold weather to pinpoint an earthquake epicenter and the time window not being short enough for evacuation. Finding an earth vapor nozzle based on boiling temperature can solve the former. Isolating the nozzle to find the next peak of daily maximum after vapor eruption can solve the latter by narrowing the time window to 1-2 days. The discovery may also be utilized to prevent mysterious air and sea accidents and predict earthquakes even months ahead of time.

Shou predicted an earthquake of magnitude 5.5 or above in Bam, Iran within 60 days to the public at UTC 0:58 Dec. 25, 2003 by observation of an earthquake cloud. The observed cloud appeared suddenly from and instated in Bam for 24 hours on Dec. 20-21, 2003. A magnitude-6.8 devastating earthquake exactly that occurred at Bam on Dec. 26, 2003 proclaimed Shou's success as the only one in the predicted location and magnitude in history (Darrell Harrington & Zhonghao Shou, Bam Earthquake Prediction & Space Technology, Seminars of the United Nations Programme on Space Applications, 16, pp. 39-63, 2005).

Using satellite images to find an earthquake vapor, including an earthquake cloud and a geoeruption (appearance of a sudden cloudless space in an existing cloud), is similar to watching an image movie except that it entails staring at a fixed point to see if a vapor, e.g., an earthquake cloud, appears suddenly and becomes big enough. The earthquake cloud's tail points toward an impending epicenter. Its size predicts magnitude, as this is done by comparing the size of the earthquake cloud with those of similar formers whose relevant earthquakes in a database form a magnitude scale. The statistic delay from a vapor to its subsequent quake predicts the time of actual earthquake ranges between 1 and 112 days (the longest in over 500 events and 30 days on the average). This theory, however, has two difficulties. Firstly, it depends on cold weather to allow an observer to pinpoint an epicenter, e.g., the Bam cloud. Secondly, its time is not short enough for advance warning for evacuation.  Shou's discovery aims to resolve both of these issues.

FIG. 1a depicts a developed model of the earthquake vapor theory. Vapor erupts suddenly from an impending hypocenter, at a temperature of 300-1520.degree. C., through main crevices to a fixed vapor nozzle on the earth's surface and then rises up. Upon encountering cold air in the atmosphere, the vapor forms an earthquake cloud, e.g., the Bam cloud, or dissipates part of an existing cloud to form a cloudless space. Such phenomenon is denoted as a geothermal eruption, or geoeruption, e.g., the geoeruption in Hollister, California (Harrington & Shou 2005). Although the vapor nozzle is the hottest place in a given geographic region and has sudden boiling temperature, there usually is not an observation station nearby unless the existence of the vapor nozzle is already known. Moreover, although vapor rises up, generally speaking the air has high thermal isolation. Additionally, observatories do not record data frequently. Thus, even if an observation is near a nozzle, such observation may not record the highest temperature. Moreover, even if an observation did record a boiling temperature, it can be deleted as a mistake. Practically, an observation station recording the highest temperature usually is located at a place where the fog lowers down in altitude. The epicenter is on the earth's surface and perpendicular to the hypocenter. The main crevice typically has tiny crevices above, through which a part of the vapor rises up slowly to form a warm trace between the epicenter and the vapor nozzle (Harrington & Shou 2005). As the vapor nozzle is usually close to the hypocenter, the trace is often short in distance.

FIG. 1a is a schematic diagram of a developed model of the earthquake vapor theory according Shou's discovery. 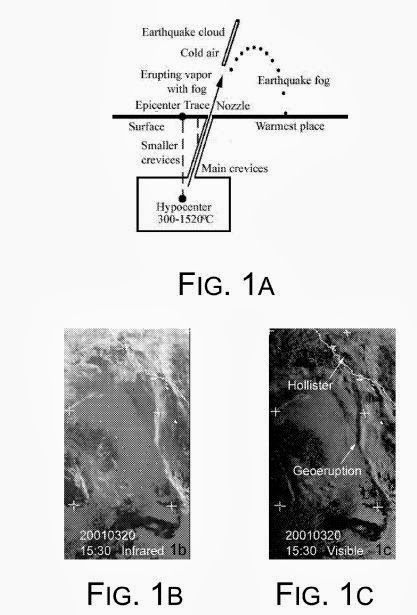 FIGS. 1b and 1c are a satellite infrared image and a visual image, respectively, of the same geographic region at the same time.

FIG. 1b is a satellite infrared image and FIG. 1c is a visual image of the same geographic region at the same time of UTC 15:30 on Mar. 20, 2001 and at the same location, around Hollister (plotted), California. The visual image shows a clear black band or geoeruption from Hollister to the Pacific Ocean, while the infrared image does not. Inventor Shou made No. 50 prediction in Hollister to the USGS exactly (Harrington & Shou 2005). This comparison suggests visible wavelengths may be better than infrared wavelengths in detecting a vapor nozzle. 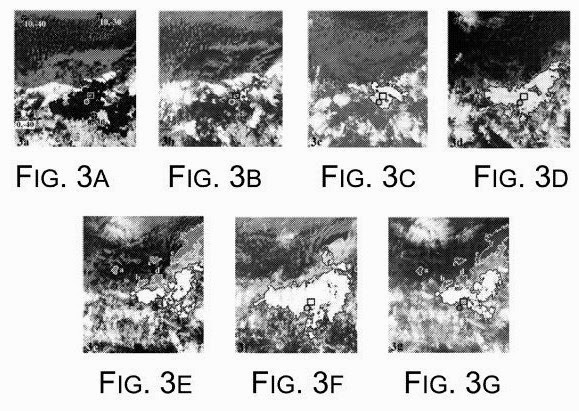 They show that around the crash location, earthquake cloud (marked by a black edge) appeared suddenly and became bigger and higher. FIG. 3g is from Channel 11 (wavelength 12.4-14.4 .mu.m) at UTC 0:00 on Jun. 1, 2009. The images of FIGS. 3e and 3g were taken at the same time and location, but under different wavelengths. It appears that, with wavelength 3.48-4.36 .mu.m, clouds a, b, c, d and e (marked by a white edge) in FIG. 3e are whiter than those in FIG. 3g (taken under wavelength 12.4-14.4 .mu.m). This phenomenon can be leveraged in detecting remote warm earthquake vapors to alert vessels to avoid mysterious air or sea accidents caused by earthquake vapor.
on December 28, 2011