University of Toulouse and University of Montreal researchers have detected two planets of sizes comparable to Earth orbiting around an old star that has just passed the red giant stage. This planetary system is located near Lyra and Cygnus constellations at a distance of 3900 light years. This discovery was  published by in Nature on December 22 2011, may shed new light on the destiny of stellar and planetary systems.

An artist's impression of the two Chthonian planets were recently discovered to be orbiting a former red dwarf star. 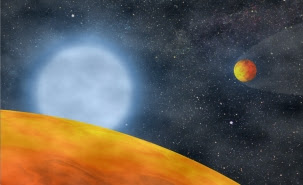 “The two planets, named KOI 55.01 and KOI 55.02, are on very short orbits around their host star,” explained University of Montreal astrophysicist Gilles Fontaine and member of the Center for research in astrophysics of Québec (CRAQ). “Having migrated so close, they probably plunged deep into the star's envelope during the red giant phase, but survived. The two observed bodies would then be the dense cores of ancient giant planets whose gaseous envelopes were vaporized during the immersion phase.” The host star, KIC 05807616, consists of the exposed core of a red giant that has lost nearly its entire envelope, and in fact the planets may have contributed to the increased loss of mass that is necessary for the formation of this type of star. This has lead the researchers to theorize that planetary systems in general may therefore influence the evolution of their parent stars.

Twinkle twinkle little star
While analyzing the data obtained with the NASA Kepler mission to study the pulsations of the star KIC 05807616 (KPD 1943+4058 or KOI 55), an international team of astrophysicists from eight different countries noticed the intriguing presence of two tiny periodic modulations reaching 0.005% of the star brightness. As these variations could not be attributed to the oscillations of the star or to other causes, the presence of the two bodies orbiting around KIC 05807616 became the only plausible explanation.

The observed variations are the joint effects of the reflection of the star light on the illuminated surface of these bodies and of the difference in thermal emission between the heated day-side and cooler night-side hemispheres, modulated by the position of the bodies on their respective orbits. As a comparison, the situation is similar to the brightness variations of the Moon associated with its different illumination phases depending on its position relative to the Sun and the observers on Earth. For KIC 05807616, calculations show that in order to produce such low amplitude brightness modulations, the sizes of the orbiting bodies are likely comparable to that of the Earth.

One Astronomical Unit (AU) is the distance between the Sun and Earth. Since these planets are separated from their very hot (27,000 oC), intensely radiating host star by only 0.0060 and 0.0076 AU, extremely harsh conditions must prevail on their surface, especially in the star-facing hemisphere where temperatures could range between 8000 and 9000 oC. Conditions like these have never been found the planets that have been discovered outside our solar system. The discovery raises many questions about what kinds of life might exist in such hellish conditions.

These planets are referred to as Chthonian planets, could be the remnants of ancient gaseous giant planets – perhaps like hotter versions of Jupiter – that orbited the star when it was still burning hydrogen in its core, a long time ago. The envelope of these giant planets would have been dissipated during the immersion phase inside the star when the latter became a red giant. Only the dense cores of the planets, composed of iron and other heavy elements, would have survived this extreme episode.

KIC 05807616, a hot and compact sdB star, is all that remains of the former red giant: an active helium-burning core surrounded by a thin hydrogen layer. Forming this type of star requires the red giant progenitor to eject almost its entire envelope via a mechanism that significantly amplifies the normal mass loss from stellar winds. The two planets discovered around this star may have triggered such a process.

About CRAQ
The Centre for Research in Astrophysics of Québec (CRAQ) is a partnership between the Université de Montréal, McGill University, and the Université Laval. The CRAQ brings together all researchers working in the field of astronomy and astrophysics of these three institutions, as well as other collaborators from Bishop's University, the Canadian Space Agency, the Cégep de Sherbrooke, and the private sector (Photon etc., ABB Bomem Inc., Nüvü Caméras). The CRAQ is funded through the program Regroupements stratégiques of the Fonds de recherche du Québec – Nature et technologies (FRQ-NT). The CRAQ constitutes a unique grouping of researchers in strophysics in Québec bent on excellence and whose varying and complementary fields of expertise allows them to be innovative, creative and competitive in several scientific fields, thus offering graduate students a wide variety of subjects in both fundamental and applied fields of research.
on December 26, 2011