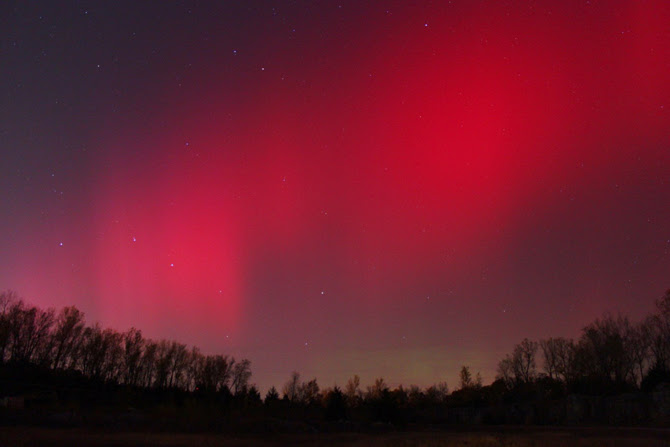 A coronal mass ejection (CME) shot off the sun late in the evening of October 21 and hit Earth on October 24 at about 2 PM ET. The CME caused strong magnetic field fluctuations near Earth's surface – technically, this level of magnetic fluctuation rated a 7 out of 9 on what is called the "KP index" – that resulted in aurora that could be seen in the US as far south as Alabama. This image was captured in Independence, Mo. Such completely red aurora are not as common as green aurora, however they can happen during strong solar activity and they occur a little more often at low latitudes such as where this was taken.

The SOlar Heliospheric Observatory (SOHO) captured this "coronograph" – so-called because the images block the sun, and only show the sun's atmosphere, or corona. The coronal mass ejection (CME) that caused aurora to appear on the evening of October 24th begins when the counter in the lower left hand hits October 22, 1:36 (which translates to October 21, 9:36 PM ET).

The strength, speed, and mass of this CME also pushed the boundary of Earth's magnetic fields – a boundary known as the magnetopause – from its normal position at about 40,000 miles away from Earth in to about 26,000 miles. This is the area where spacecraft in geosynchronous orbit reside, so these spacecraft were briefly orbiting outside of Earth's normal environment, traveling through material and magnetic fields far different from usual.

Another view of an all-red aurora captured in Independence, Mo., on October 24, 2011. 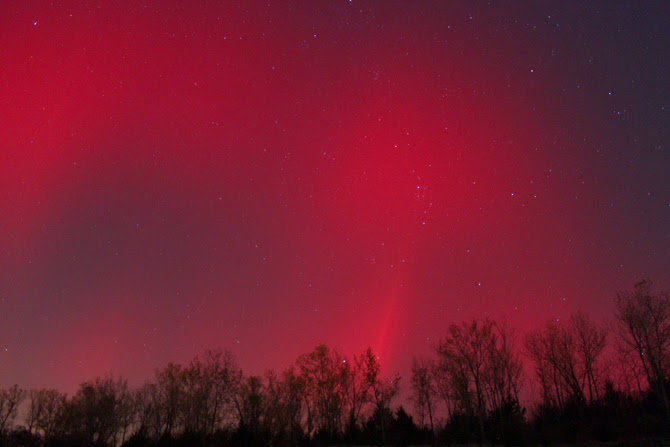 
What is a coronal mass ejection?

For answers to these and other space weather questions, please visit the Spaceweather Frequently Asked Questions page.