One Step Closer To Dark Matter In Universe

Scientists all over the world are working feverishly to find the dark matter in the universe. Now researchers at Stockholm University have taken one step closer to solving the enigma with a new method.

Estimated distribution of dark matter and dark energy in the universe

Credit: Wikipedia
“With our new method, for the first time we have been able to exclude models regarded by many as the most natural ones. Previous attempts did not achieve the same sensitivity. What’s more, our results are especially reliable,” says Jan Conrad.

“We can’t see dark matter because it doesn’t interact with the matter we know about. Nor does it emit any light. It’s virtually invisible. But we can determine that it affects the matter we’re familiar with.”

Strong gravitational lensing as observed by the Hubble Space Telescope in Abell 1689 indicates the presence of dark matter—enlarge the image to see the lensing arcs. 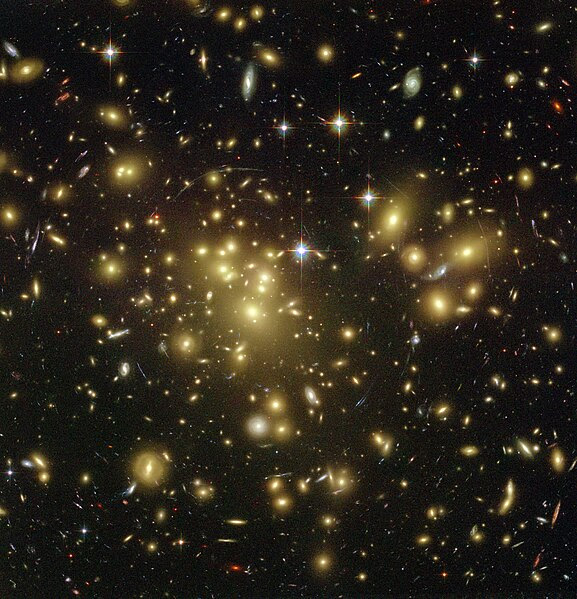 “We see how the rotation of galaxies is affect by something that weighs a lot but is invisible. We also see how the gas in galaxy clusters doesn’t move as it would if there were only visible matter present. So we know it’s there. The question is simply what it is. Many theoretical models have been developed to predict particles that meet the requirements for being identified as dark matter. But experiments are needed if we are to determine whether any of these models are correct,” says Jan Conrad.

Since dark matter is invisible, we can only see traces of it, and one way to do this is to look at light with extremely high energy, so-called gamma radiation. With the help of the satellite-borne Fermi Large Area Telescope, scientists can study gamma radiation and look for traces of dark matter.

“We’ve looked at gamma radiation from dwarf galaxies. These galaxies are small and dim, but extremely massive, so they seem to consist largely of dark matter. Unfortunately we still haven’t detected a gamma signal from the dark matter in these objects, but we are definitely getting closer. Our new method involves looking at several dwarf galaxies at the same time and combining the observations in a new way, which yields excellent results. This is an exciting time for dark matter research, because we’re getting closer and closer,” says Maja Llena Garde.

“This is truly a giant step forward in our pursuit of dark matter,” says the director of the Oskar Klein Center, Lars Bergström. “With my colleague Joakim Edsjö, I’ve studied these processes theoretically for more than ten years, but this is the first time important experimental breakthroughs are being seen. Now we just hope that Jan, Maja, and the Fermi team will continue this exciting quest using their new method.”

The research team’s findings are being published in the journal Physical Review Letters under the title “Constraining dark matter models from a combined analysis of Milky Way satellites with the Fermi Large Area Telescope.”

Citation: The research team’s findings are being published in the journal Physical Review Letters under the title “Constraining dark matter models from a combined analysis of Milky Way satellites with the Fermi Large Area Telescope.”