The salinity gives information on the salinity barrier layer which plays a major role in vertical heat transfer. It proves to be a driving factor in global climate dynamics. However, scientists do not yet have access to sufficiently frequent observations on salinity to conduct close monitoring of the warm-water mass.

The 1997 El Niño observed by TOPEX/Poseidon. The white areas off the tropical coasts of South and North America indicate the pool of warm water: El Niño-Southern Oscillation 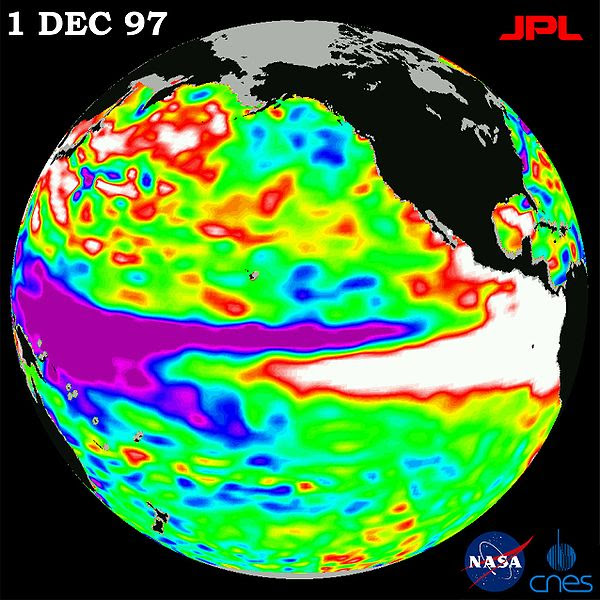 In contrast, ocean colour can already be monitored weekly by using satellite images. A team of IRD scientists and their partners2 from joint research unit UMR LEGOS3 recently showed the colour to be an indicator of the eastern edge of the warm pool, whose extension, to a distance of up to 5000 km, triggers the El Niño events. Scientists will now be able to predict related climate anomalies and warn of the consequences.

The immense warm-water reservoir in the western tropical Pacific –with sea surface temperatures above 28°C and an area as large as Europe, is the principal “heat pump” of the Earth. This warm pool, as climatologists call it, feeds the heat and humidity fluxes at global scale, exerting a direct effect on the global climate. Particularly important is its role as generator of the El Niño and La Niña* events, the climate’s two enfants terribles. Every two to seven years they cause havoc –cyclones, drought in Africa and floods in Latin America. Keeping watch of changes taking place in this water mass is therefore crucial for devising prediction measures for these events and giving warnings on the socio-economic and environmental consequences.

Salt, ingredient for the future

There is one factor potentially useful for observation, or even prediction, of climate anomalies. This is the salinity of the ocean layers, an indicator of the salinity barrier layer located at a few tens of metres’ depth, a characteristic feature of the western tropical Pacific. A combined IRD–Météo France1 research team recently showed that this barrier is a dominant parameter in the warm pool’s ocean-atmosphere interactions. Distinct salinity difference acts as an insulator, restricting vertical mixing and heat exchanges between the stratified layers of the upper ocean**. The oceanographers ran numerical modelling experiments on the influence of this layer on the onset of El Niño and the global climate variability. The salinity barrier layer was shown to be an active –albeit indirect– element and not a passive consequence of the process as previously assumed.

Monitoring of this parameter could be extremely useful, but for the moment, observations are still too few and far between to apply it as a viable predictive tool.

The eastward advance of the pool’s warm water front along the Equator is another factor contributing to El Niño onset. However, it can migrate as far as 5000 km, making accurate detection of the warm-water front difficult. A recent study by the IRD and its partners2, at the UMR LEGOS3, showed that ocean colour observation from satellite images can help locate the eastern limit of the warm waters. Analysis of data from American satellite missions SeaWiFS and MODIS/Aqua since 1997, showed that the colour of the warm pool contrasts sharply and permanently with that of the adjacent waters on the east side.

The ocean beyond the warm pool’s edge is more strongly green owing to surface waters’ high concentration in chlorophyll a –the most common photosynthetic pigment of ocean algae. The proliferation of algae is a sign of an environment abundant in the nutrients required for their development. This richness in turn is due to an upward movement of cooler (an average 24°C) mineral salt-laden, more strongly saline waters from the ocean’s deep layers, driven by a process known as upwelling4.

These investigations as a whole have refined understanding and modeling of the mechanisms which control and trigger El Niño and La Niña. High-frequency surveillance models and tools have now been developed. The next step will be the forecasting of these climate anomalies. The SMOS5 satellite mission, launched by the European Space Agency at the end of 2009 and devoted to observation of ocean salinity, will in the coming years enable scientists to make use of the data to improve the surveillance system over the dynamics of the ENSO (El Niño Southern Oscillation).

1. These numerical modelling experiments were conducted jointly with research scientists of the Centre National de Recherches Météorologiques at Météo-France.

2. This work was accomplished in partnership with researchers from the CNRS.

4. Upwellings generated by winds which push the surface waters along and pull water up from the deep ocean.