'New Paradigm' In The Way Drugs Can Be Manufactured Discovered

Researchers at Rensselaer Polytechnic Institute and the University of North Carolina, Chapel Hill, have announced a new method to build the important heparin drug.

Robert Linhardt is working to forever change the way some of the most widely used drugs in the world are manufactured. Today, in the journal Science, he and his partner in the research, Jian Liu, have announced an important step toward making this a reality. The discovery appears in the October 28, 2011 edition of the journal Science in a paper titled "chemoenzymatic synthesis of homogeneous ultra-low molecular weight heparins."

Linhardt and his colleagues have developed a new and much more efficient process to manufacture the drug fondaparinux. Here the chemical structure of the new drug is compared to the original. 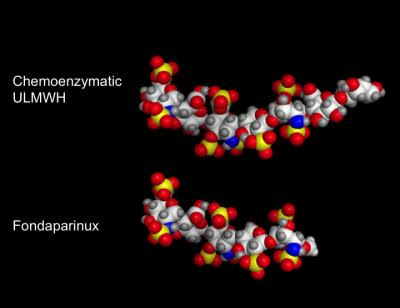 Linhardt, the Ann and John H. Broadbent Jr. '59 Senior Constellation Professor of Biocatalysis and Metabolic Engineering at Rensselaer Polytechnic Institute, and Jian Liu, a professor in the Eshelman School of Pharmacy at the University of North Carolina at Chapel Hill, have discovered an entirely new process to manufacture ultra-low molecular weight heparin.

The research shows that the drug is identical in performance and safety to the current and successful anticoagulant fondaparinux, but is purer, faster, and less expensive to produce.

"This research represents an entirely new paradigm in drug manufacturing," Linhardt said. "With this discovery, we have successfully demonstrated that replacing the current model of drug production with a chemoenzymatic approach can greatly reduce the cost of drug development and manufacturing, while also increasing drug performance and safety, and reduce the possibility of outside drug contamination. It is our hope that this is the first step in the adoption of this method for the manufacture of many other drugs."

The new process uses chemicals and enzymes to reduce the number of steps in production of fondaparinux from approximately 50 steps down to just 10 to 12. In addition, it increases the yield from that process 500-fold compared to the current fondaparinux process, and could decrease the cost of manufacture by a similar amount, according to Linhardt.

Fondaparinux, which is sold as a name-brand drug and was also recently approved by the FDA as a generic drug, is a synthetic anticoagulant used to treat deep vein thrombosis, with over $500 million in annual sales. It is part of a much larger family of anticoagulant drugs known as heparins. But, unlike most heparin products, it is chemically synthesized from non-animal materials. All other heparin-based drugs currently on the market use materials from the intestines of pigs and lungs of cattle as source materials. Such animal materials are more likely to become contaminated, according to Linhardt.

"When we rely on animals, we open ourselves up for spreading viruses and prion diseases like mad cow disease through the use of these heparins," Linhardt said. "And because most of the raw material is imported, we often can't be sure of exactly what we are getting."

But, fondaparinux is extremely costly to produce, according to Linhardt. "The process to produce the drug involves many steps to purify the material and creates tons and tons of hazardous waste to dispose of," Linhardt said.

The new process developed by Linhardt and Liu greatly reduces the number of steps involved in the production of the drug. This reduces the amount of waste produced and the overall cost of producing the drug.

"Cost should no longer be a major factor in the use or production of this drug," Linhardt said.

The process uses sugars and enzymes that are identical to those found in the human body to build the drug piece by piece. The backbone of the material is first built sugar by sugar and then decorated with sulfate groups through the use of enzymes to control its structure and function in the body.

Linhardt and Liu have already begun testing the drug in animal models with successful results and think the drug could be quickly transferred to the market.

"Because the new drug is biologically identical in its performance to the already approved fondaparinux, the approval process for this new drug should work very similar to the approval process used for fondaparinux," Linhardt said. He also thinks that this combined chemical and enzymatic synthesis can be quickly brought to patients in need and adapted for the production of many other improved carbohydrate-containing drugs.

"During this study, we were able to quickly build multiple doses in a simple laboratory setting and feel that this is something than can be quickly and easy commercialized to reduce the cost of this drug and help to shift how pharmaceutical companies approach the synthesis of carbohydrate-containing drugs."

The finding is part of a much larger body of work occurring in the Linhardt lab to completely replace all types of heparin-based or other glycoprotein-based drugs with safer, low-cost, synthetic versions that do not rely on foreign, potentially contaminated animal sources. More information on this research can be found here, here, and here.

The research is funded by the National Institutes of Health.

Linhardt and Liu were joined in the research by Yongmei Xu, Haoming Xu, Renpeng Liu, and Juliana Jing of the University of North Carolina, Chapel Hill; Sayaka Masuko of Rensselaer Polytechnic Institute; and Majde Takieddin and Shaker Mousa of the Albany College of Pharmacy and Health Sciences.