Small, light and simple. These are the three key characteristics of MovinSense, a microelectronic device developed by Tomorrow Options, a spin-off from INESC TEC (Technology and Science)/FEUP. The device is placed on the chest of the bedridden patient with limited mobility and it registers their position, communicating with nursing equipment via wireless.

MovinSense makes nursing staff aware of the need to reposition the patient which is a task that must be conducted, on average, at least every two hours but it varies according to the patient’s condition. Bedsores are easily avoidable and therefore they are usually attributed to clinical error. However, treating them is very costly and represents, on average, 4% of a developed country’s national health budget. The British National Health Service currently spends £3.1 billion on treating bedsores.

Bedsore Ulcer: Stage 4 decubitus displaying the tuberosity of the ischium protruding through the tissue and possible onset of osteomyelitis 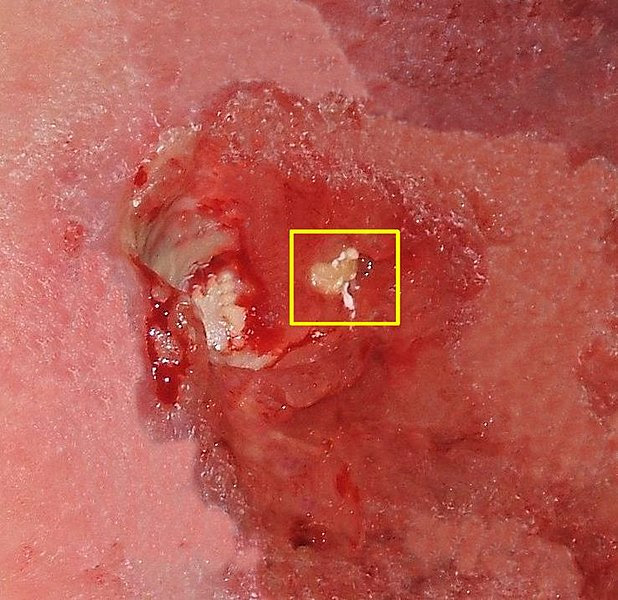 MovinSense is the only device on the market that monitors patients and not the bed; it requires less financial investment and occupies less storage space than other methods. Furthermore, it is easy to use and it attacks the root of the problem which is avoiding overexposing the same body part to pressure. Mattresses that prevent bedsores and electric articulated beds cost on average 1,000 Euros and a mattress with pressure sensors costs on average 2,000 Euros.

Monitoring 10 patients with MovinSense requires close to 6,500 Euros because the system only requires one transmitting device and the same number of receiving devices as patients. Each device costs 400 Euros and its battery can operate autonomously for over one week. Treating one single grade 1 bedsore costs around 1,050 Euros, which is the equivalent of investing in two MovinSense devices. Therefore, as soon as the appearance of one bedsore has been prevented, the investment in MovinSense will be recovered. MovinSense is in the advanced testing stages and is almost ready to be put on the market. Tomorrow Options is currently negotiating with companies in Sweden, the USA and the Netherlands.

MovinSense will also eliminate the need for health technicians to orally communicate information, which will reduce clinical errors that lead to the appearance of bedsores because data will be automatically registered by the system. This increases the reliability of the information transmitted, above all at shift handovers. The device can also hold a file for each patient and can warn nurses about other important information, such as drug administration times.

Tomorrow Options has submitted an international patent for the technology and its application.