The merging of two technologies under development - plasmonics and nanophotonics - is promising the emergence of new "quantum information systems" far more powerful than today's computers.

The technology hinges on using single photons – the tiny particles that make up light – for switching and routing in future computers that might harness the exotic principles of quantum mechanics.

Structures called "metamaterials" and the merging of two technologies under development are promising the emergence of new "quantum information systems" far more powerful than today's computers. The concept hinges on using single photons – the tiny particles that make up light – for switching and routing in future computers that might harness the exotic principles of quantum mechanics. The image at left depicts a "spherical dispersion" of light in a conventional material, and the image at right shows the design of a metamaterial that has a "hyperbolic dispersion" not found in any conventional material, potentially producing quantum-optical applications. 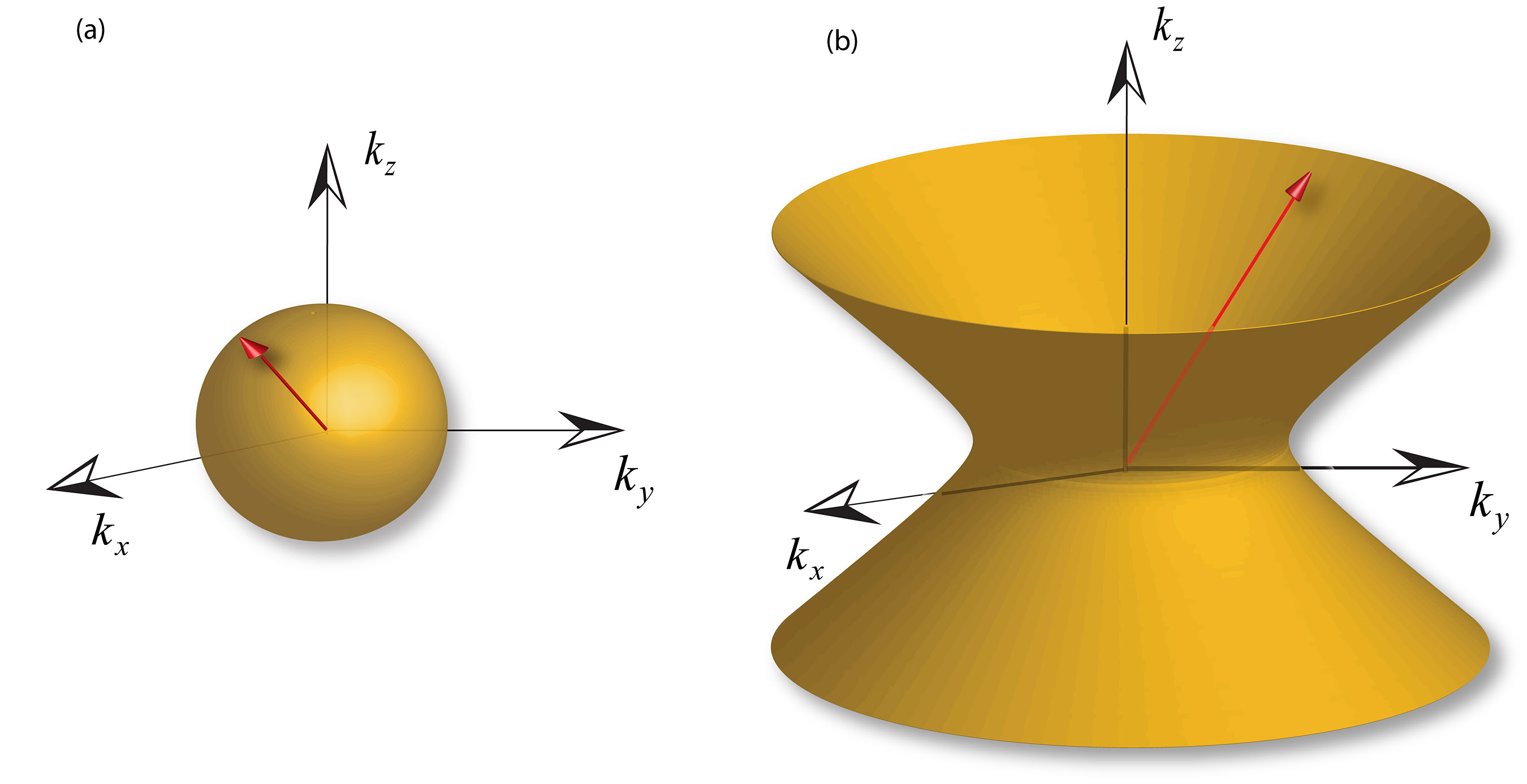 The concept is described in an article to be published Friday (Oct. 28) in the journal Science. The article will appear in the magazine's Perspectives section and was written by Shalaev and Zubin Jacob, an assistant professor of electrical and computer engineering at the University of Alberta, Canada.

"A seamless interface between plasmonics and nanophotonics could guarantee the use of light to overcome limitations in the operational speed of conventional integrated circuits," Shalaev said.

Researchers are proposing the use of "plasmon-mediated interactions," or devices that manipulate individual photons and quasiparticles called plasmons that combine electrons and photons.

One of the approaches, pioneered at Harvard University, is a tiny nanowire that couples individual photons and plasmons. Another approach is to use hyperbolic metamaterials, suggested by Jacob; Igor Smolyaninov, a visiting research scientist at the University of Maryland; and Evgenii Narimanov, an associate professor of electrical and computer engineering at Purdue. Quantum-device applications using building blocks for such hyperbolic metamaterials have been demonstrated in Shalaev's group.

"We would like to record and read information with single photons, but we need a very efficient source of single photons," Shalaev said. "The challenge here is to increase the efficiency of generation of single photons in a broad spectrum, and that is where plasmonics and metamaterials come in."

Today's computers work by representing information as a series of ones and zeros, or binary digits called "bits."

Computers based on quantum physics would have quantum bits, or "qubits," that exist in both the on and off states simultaneously, dramatically increasing the computer's power and memory. Quantum computers would take advantage of a strange phenomenon described by quantum theory called "entanglement." Instead of only the states of one and zero, there are many possible "entangled quantum states" in between one and zero.

An obstacle in developing quantum information systems is finding a way to preserve the quantum information long enough to read and record it. One possible solution might be to use diamond with "nitrogen vacancies," defects that often occur naturally in the crystal lattice of diamonds but can also be produced by exposure to high-energy particles and heat.

"The nitrogen vacancy in diamond operates in a very broad spectral range and at room temperature, which is very important," Shalaev said.

The work is part of a new research field, called diamond photonics. Hyperbolic metamaterials integrated with nitrogen vacancies in diamond are expected to work as efficient "guns" of single photons generated in a broad spectral range, which could bring quantum information systems, he said.