Scientists at the Naval Research Laboratory (NRL) hit a materials research milestone in the Office of Naval Research’s (ONR) Electromagnetic Railgun program when they fired a laboratory-scale system for the 1,000th time Oct. 31.

“A significant amount of development has been coming out of NRL to support the program,” said Roger Ellis, ONR’s Electromagnetic Railgun (EMRG) program officer. “It’s a key piece of making railgun successful.” 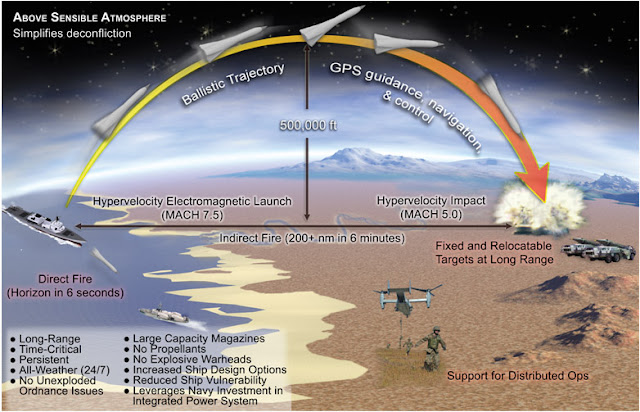 The EMRG is a long-range weapon that launches projectiles using electricity instead of chemical propellants. Under development by the Department of the Navy (DON) for use aboard ships, the system will provide Sailors with multi-mission capability, allowing them to conduct precise naval surface fire support, or land strikes; cruise missile and ballistic missile defense; and surface warfare to deter enemy vessels.

“The weapon does all its damage because of its speed,” said Dr. Roger McGinnis, program executive for ONR’s Naval Air Warfare and Weapons Department, which oversees EMRG. Launched at 2 to 2.5 kilometers per second (4,500 to 5,600 mph) without using explosives, the projectile reaches its target at speeds that require only a small charge similar to that found in automobile airbags to dispense its payload, eliminating the objective through the inherent kinetic energy.

“EMRG will provide the Department of Defense with an advantage in future conflicts by giving troops the ability to fire weapons inexpensively against targets,” McGinnis said.

As part of the EMRG development program, ONR and NRL co-funded scientists at NRL to build and operate a 6-meter long, 50 mm diameter railgun as a subscale experimental lab at the Materials Testing Facility (MTF). Researchers fired the first shot in March 2007. After improving the gun’s sliding armature and rails, the lab has fired an average of 300 shots per year since 2008.

“The 1,000th shot is testing new ideas of how the armature interacts with the rails,” said Dr. Robert Meger, head of NRL’s charged particle physics branch, which conducts about 30 experiments annually on the railgun. Following each test firing, researchers dismantle the gun to examine all the components. They slice up the rails for further analysis under a microscope to reveal surface damage.

During the course of firing all 1,000 shots, NRL scientists have experimented with a variety of materials and geometries to determine which ones can withstand the metal-melting temperatures and pressures of shooting a 1.5-megajoule energy weapon. One megajoule of energy is equivalent to a 1-ton car traveling at 100 miles per hour.

“We’ve really explored a lot of territory,” ONR’s Ellis said. “When you couple what we’re seeing in testing with what we’re seeing in modeling and simulation, it results in some interesting barrel shapes that you wouldn’t intuitively think about. Railgun barrels don’t necessarily have to be round as in most conventional gun designs.”

Since 2005, scientists have been working to increase the railgun’s barrel life, muzzle energy and size. Ultimately, their work will help to produce a 64-megajoule railgun with a range of about 220 nautical miles.