The Lutetia Asteroid – A Prehistoric Relic From Our Solar System's Birth

New information has been published about the Lutetia asteroid that was observed in 2010 and its properties. The analysis of the data collected during the spacecraft fly-by indicates that Lutetia is a dense, intact relic dating back to the birth of our solar system. The Rosetta spacecraft, owned and operated by the European Space Agency (ESA), passed the Lutetia asteroid at close range in summer 2010. The asteroid was measured to be more than 100 kilometres in diameter.

A year after the flyby, the analysis shows that Lutetia is a primordial asteroid, with a surface covered in craters, pulverised rocks and landslides. It may also have tried to form an iron-core billions of years ago. 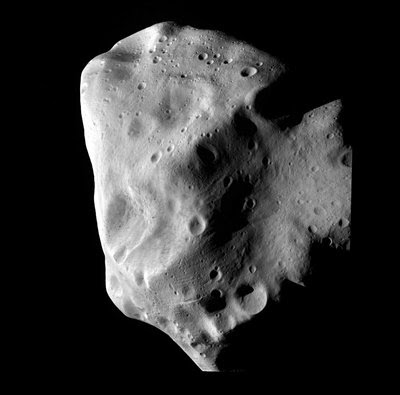 ESA's Rosetta spacecraft has revealed asteroid Lutetia to be a primitive body, left over as the planets were forming in our Solar System. Results from Rosetta's fleeting flyby also suggest that this mini-world tried to grow a metal heart.

Rosetta flew past Lutetia on 10 July 2010 at a speed of 54 000 km/hr and a closest distance of 3170 km. At the time, the 130 km-long asteroid was the largest encountered by a spacecraft. Since then, scientists have been analysing the data taken during the brief encounter.

All previous flybys went past objects, which were fragments of once-larger bodies. However, during the encounter, scientists speculated that Lutetia might be an older, primitive 'mini-world'.

Landslides on Lutetia are thought to have been caused by the vibrations created by impacts elsewhere on the asteroid dislodging pulverised rocks. 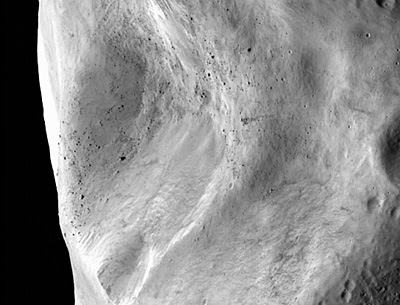 
The new research results on the asteroid, published this week in Science magazine, were acquired through international cooperation, and the analysis was based on a mathematical method developed by Professor Mikko Kaasalainen. The analysis conducted at Tampere University of Technology is part of the research of the Finnish Centre of Excellence in Inverse Problems Research, and is being funded by the Academy of Finland.

The density of the Lutetia asteroid was determined by calculating its mass from changes along the flight path of the spacecraft, and its volume from a model of the entire asteroid. The model was constructed mathematically, even though the spacecraft originally viewed only about half of the surface of the asteroid while flying past.

Several images have been combined into a map of the asteroid. This image represents the total area viewed by the spacecraft during the flyby, which amounted to more than 50% of Lutetia’s surface. 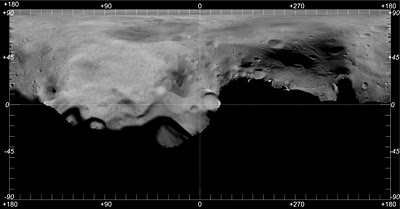 Using Kaasalainen’s method, developed specifically for spacecraft fly-bys, it is possible to combine ground-based light-curve measurements and adaptive-optical imaging with images taken by the space probe. “This method enabled us to create a reliable model of the part of Lutetia that wasn’t visible to the spacecraft, and thereby, to calculate Lutetia’s density, which proved to be much larger than the values that we’ve been able to get for other asteroids,” Kaasalainen explains.

“Lutetia’s history was constructed much like a puzzle; research groups from different fields all around the world contributed their input to create the final result,” says Kaasalainen. “The high density, large number of old impact traces, and other surface characteristics led geologists to conclude that Lutetia likely has a metallic core surrounded by a more porous outer layer. Despite its dents and knocks, Lutetia has remained nearly in its original shape, unlike the majority of asteroids, which mostly have come together from a number of impact fragments. Targets such as Lutetia are extremely valuable, because they provide us with information about the conditions that existed at the dawn of our solar system.”

There are also boulders strewn across the surface: some are 300–400 m across, or about half the size of Ayers Rock, in Australia.

Some impacts must have been so large that they broke off whole chunks of Lutetia, gradually sculpting it into the battered wreck we see today.


This map of Lutetia is centred on the north pole. The number of craters in the asteroid's various regions have been used to date the surface. Some parts of the surface are 3.6 billion years old, while others are just 50–80 million years old. 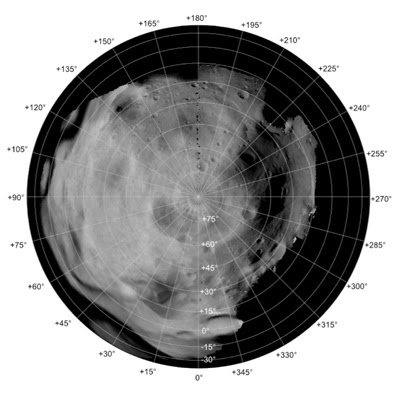 The Lutetia fly-by also proved the accuracy of the generalised method for asteroid modelling, which is based only on ground-based analysis and was developed by Kaasalainen in collaboration with the international research network. “We were amazed to notice that the preliminary model made of Lutetia prior to the fly-by and used in the planning of the flight path of the spacecraft proved valid with the accuracy of a minor percentage for the entire area of which we got spacecraft images.”

In autumn 2008, Rosetta made a similar fly-by past the notably smaller Steins asteroid. The asteroid was analysed using the same method as Lutetia, and the results were published in Science magazine in 2010. In terms of its structure, Steins is quite different from Lutetia. It more closely resembles a gravel heap, and its development has been shaped by the effect of sunlight on its spin state. The observations concerning this phenomenon, as made by Kaasalainen’s team, were published in Nature magazine in 2007. The Rosetta spacecraft is currently heading toward its final destination, the comet Churyumov-Gerasimenko, which it is expected to reach in 2014.

Kaasalainen is involved in ESA’s Rosetta research consortium, which has 58 members representing 11 countries and 33 different research institutes. It is this consortium that is responsible for the Lutetia publication. Kaasalainen is also vice director of the Finnish Centre of Excellence in Inverse Problems Research, which develops and applies mathematical methods for the interpretation of different observational data for many different fields, ranging from biology to cosmology.