Ask scientists about a large asteroid that will pass between the Earth and moon in a close encounter between our planet and a near-Earth object. 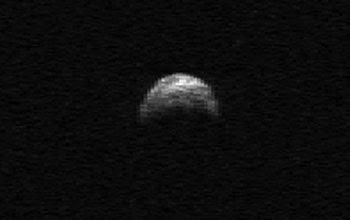 People are invited to participate in a live online chat this Thursday from 3 p.m. to 4 p.m. EDT with two eminent astronomers from the National Science Foundation (NSF) and NASA, who will discuss a large asteroid that will approach close to Earth on Nov. 8, 2011 and the science of such near-Earth asteroids.

This rare flyby of the asteroid--which is known as 2005 YU55--will likely draw significant public interest because of the asteroid's large size of about 396 meters (1,300 feet) in diameter, the nature of its close encounter with Earth and the public's fascination with near-Earth objects.

The chat is sponsored by ScienceNOW, the daily news site of the journal Science. To participate, go to ScienceNow's website on November 3 at 3 p.m. EDT and submit questions to:

Scott Fisher: A program director in the Division of Astronomical Sciences at the National Science Foundation and a staff scientist at the Gemini Observatory--a large international observatory with eight-meter telescopes located in Hawaii and Chile--where he researches planet formation.

Donald K. Yeomans: A scientific investigator on NASA's Deep Impact mission that successfully impacted comet Tempel 1 in July 2005, and a senior research scientist at the Jet Propulsion Laboratory, where he contributes to predictions of future close Earth approaches and impacts by comets and asteroids.

The November 3 chat about asteroid 2005 YU55 and other near-Earth objects provides an ideal opportunity to ask experts about these and other topics:
What is currently known about the 2005 YU55's size, shape, orbit and origins?
What are the real dangers potentially posed by asteroids and comets vs. threats hyped by doomsayers?
What is the likelihood that 2005 YU55 will ever crash into the Earth?
When and where is the best place to view 2005 YU55?
How are scientists currently tracking comets and asteroids that may impact the Earth?
What types of additional information are scientists likely to learn about 2005 YU55 and asteroids in general via radar, visual and infrared monitoring of the asteroid during its close approach to Earth?

The live online chat on 2055 YU55 is part of the journal Science'sweekly series of chats on the hottest topics in science held every Thursday at 3 p.m. EDT.
on October 31, 2011