A surprising new University of Colorado Boulder study shows that huge amounts of fatty acids circulating in the bloodstreams of feeding pythons promote healthy heart growth, results that may have implications for treating human heart disease.

CU-Boulder Professor Leslie Leinwand and her research team found the amount of triglycerides -- the main constituent of natural fats and oils -- in the blood of Burmese pythons one day after eating increased by more than fiftyfold. Despite the massive amount of fatty acids in the python bloodstream there was no evidence of fat deposition in the heart, and the researchers also saw an increase in the activity of a key enzyme known to protect the heart from damage.

After identifying the chemical make-up of blood plasma in fed pythons, the CU-Boulder researchers injected fasting pythons with either "fed python" blood plasma or a reconstituted fatty acid mixture they developed to mimic such plasma. In both cases, the pythons showed increased heart growth and indicators of cardiac health. The team took the experiments a step further by injecting mice with either fed python plasma or the fatty acid mixture, with the same results.

"We found that a combination of fatty acids can induce beneficial heart growth in living organisms," said CU-Boulder postdoctoral researcher Cecilia Riquelme, first author on the Science paper. "Now we are trying to understand the molecular mechanisms behind the process in hopes that the results might lead to new therapies to improve heart disease conditions in humans."

Previous studies have shown that the hearts of Burmese pythons can grow in mass by 40 percent within 24 to 72 hours after a large meal, and that metabolism immediately after swallowing prey can shoot up by fortyfold. As big around as telephone poles, adult Burmese pythons can swallow prey as large as deer, have been known to reach a length of 27 feet and are able to fast for up to a year with few ill effects.

An American Alligator and a Burmese Python locked in struggle. 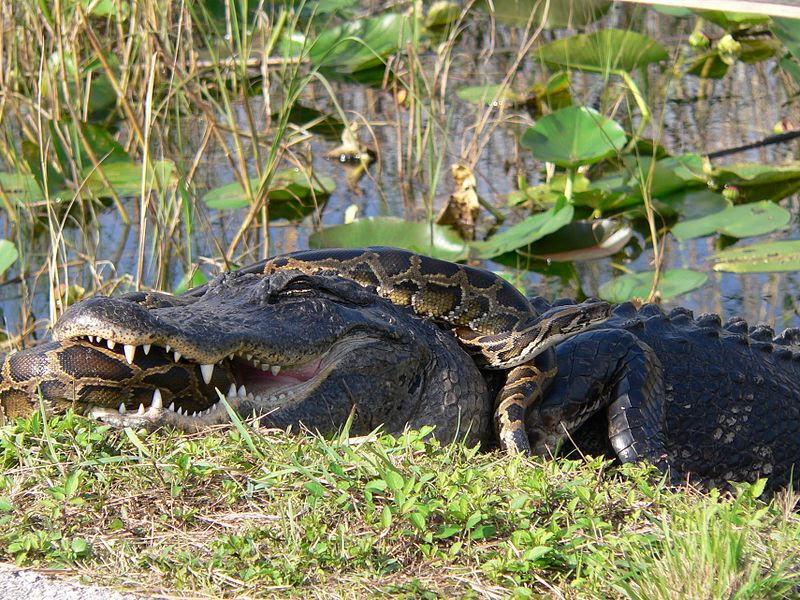 There are good and bad types of heart growth, said Leinwand, who is an expert in genetic heart diseases including hypertrophic cardiomyopathy, the leading cause of sudden death in young athletes. While cardiac diseases can cause human heart muscle to thicken and decrease the size of heart chambers and heart function because the organ is working harder to pump blood, heart enlargement from exercise is beneficial.

"Well-conditioned athletes like Olympic swimmer Michael Phelps and cyclist Lance Armstrong have huge hearts," said Leinwand, a professor in the molecular, cellular and developmental biology department and chief scientific officer of CU's Biofrontiers Institute. "But there are many people who are unable to exercise because of existing heart disease, so it would be nice to develop some kind of a treatment to promote the beneficial growth of heart cells."

Riquelme said once the CU team confirmed that something in the blood plasma of pythons was inducing positive cardiac growth, they began looking for the right "signal" by analyzing proteins, lipids, nucleic acids and peptides present in the fed plasma. The team used a technique known as gas chromatography to analyze both fasted and fed python plasma blood, eventually identifying a highly complex composition of circulating fatty acids with distinct patterns of abundance over the course of the digestive process.

In the mouse experiments led by Harrison, the animals were hooked up to "mini-pumps" that delivered low doses of the fatty acid mixture over a period of a week. Not only did the mouse hearts show significant growth in the major part of the heart that pumps blood, the heart muscle cell size increased, there was no increase in heart fibrosis -- which makes the heart muscle more stiff and can be a sign of disease -- and there were no alterations in the liver or in the skeletal muscles, he said.

"It was remarkable that the fatty acids identified in the plasma-fed pythons could actually stimulate healthy heart growth in mice," said Harrison. The team also tested the fed python plasma and the fatty acid mixture on cultured rat heart cells, with the same positive results, Harrison said.

The CU-led team also identified the activation of signaling pathways in the cells of fed python plasma, which serve as traffic lights of sorts, said Leinwand. "We are trying to understand how to make those signals tell individual heart cells whether they are going down a road that has pathological consequences, like disease, or beneficial consequences, like exercise," she said.

The prey of Burmese pythons can be up to 100 percent of the constricting snake's body mass, said Leinwand, who holds a Marsico Endowed Chair of Excellence at CU-Boulder. "When a python eats, something extraordinary happens. Its metabolism increases by more than fortyfold and the size of its organs increase significantly in mass by building new tissue, which is broken back down during the digestion process."

The three key fatty acids in the fed python plasma turned out to be myristic acid, palmitic acid and palmitoleic acid. The enzyme that showed increased activity in the python hearts during feeding episodes, known as superoxide dismutase, is a well-known "cardio-protective" enzyme in many organisms, including humans, said Leinwand.

The new Science study grew out of a project Leinwand began in 2006 when she was named a Howard Hughes Medical Institute Professor and awarded a four-year, $1 million undergraduate education grant from the Chevy Chase, Md.-based institute. As part of the award Leinwand initiated the Python Project, an undergraduate laboratory research program designed to focus on the heart biology of constricting snakes like pythons thought to have relevance to human disease.

Undergraduates contributed substantially to the underpinnings of the new python study both by their genetic studies and by caring for the lab pythons, said Leinwand. While scientists know a great deal about the genomes of standard lab animal models like fruit flies, worms and mice, relatively little was known about pythons. "We have had to do a lot of difficult groundwork using molecular genetics tools in order to undertake this research," said Leinwand.

CU-Boulder already had a laboratory snake facility in place, which contributed to the success of the project, she said.

"The fact that the python study involved faculty, postdoctoral researchers, a graduate student and an undergraduate, Christopher Wall, shows the project was a team effort," said Leinwand. "Chris is a good example of how the University of Colorado provides an incredible educational research environment for undergraduates." Wall is now a graduate student at the University of California, San Diego.

Hiberna Corp., a Boulder-based company developing drugs based on natural models of extreme metabolic regulation, signed an exclusive agreement with CU's Technology Transfer Office in 2008, licensing technology developed by Leinwand based on the natural ability of pythons to dramatically increase their heart size and metabolism.

Directed by Nobel laureate and CU Distinguished Professor Tom Cech, the Biofrontiers Institute was formed to advance human health and welfare by exploring critical areas of biology and translating new knowledge into practical applications. The institute is educating a new generation of interdisciplinary scientists to work together on solutions to complex biomedical challenges and to expand Colorado's leadership in biotechnology. For more information on the Biofrontiers Institute visit cimb.colorado.edu/.