Scientists have proven that the fungus Geomyces destructans causes white-nose syndrome, a fast-spreading and highly lethal disease of bats.

Pictured in 2008, a biologist takes samples from a cave in an early attempt to determine the cause of the deadly white-nose syndrome in hibernating bats. Scientists from the University of Wisconsin-Madison and other institutions confirmed that the fungus, Geomyces destructans, indeed causes white-nose syndrome, which is decimating bats in the Eastern United States and spreading rapidly through the Midwest. 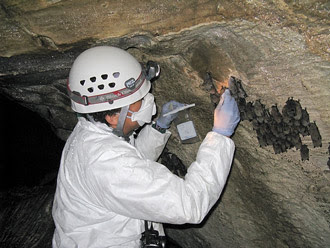 Research published today (Wednesday, Oct. 26) in the journal Natureprovides the first direct evidence that this fungus is responsible for a disease that is decimating bats in North America.

Research at the USGS National Wildlife Health Center in Madison, by scientists from the U.S. Geological Survey, the University of Wisconsin-Madison, and other institutions, showed that 100 percent of healthy little brown bats exposed to G. destructans developed white-nose syndrome while hibernating in captivity.

The study fulfilled established criteria for proving that a microbe causes an infectious disease: A pure culture of a suspected pathogen is able to infect a host plant or animal, which then develops the clinical signs of the disease, and then the pathogen is re-isolated from the experimentally infected host species.

White-nose syndrome is a skin infection that often begins around the muzzle, but the exact mechanism of mortality is unknown.

“By identifying the causative agent of white-nose syndrome, this study provides information that is critical for developing management strategies to preserve vulnerable bat populations and the ecosystem services that they provide in the U.S. and Canada,” says study author David Blehert, a microbiologist at the Wildlife Health Center, and a honorary fellow at the School of Veterinary Medicine at UW–Madison.

This study could help bat conservation by supporting refinements to disease management strategies, said Jeffrey Lorch, a graduate student in the UW–Madison Molecular and Environmental Toxicology Center, another contributor to the study.

Although the study demonstrated that G. destructans can spread by contact between bats, transmission through the air was not seen. Still, it's likely that the fungus can spread by several mechanisms, Blehert added.

“Virtually all pathogens, especially spore-producing fungi, are spread by multiple routes,” he says. “This is why in an effort to further control the spread of white-nose syndrome, resource-management agencies have implemented universal precautions, including limiting human access to sensitive environments occupied by bats, decontaminating equipment and clothing moved between these environments, and restricting the movement of equipment between sites.”

Insect-eating bats provide ecological services that are estimated to save the U.S. agricultural industry billions of dollars each year in insect-control expenses. However, U.S. bat populations have been declining at an alarming rate since 2006, when white-nose syndrome first appeared in New York State. Since then, the fungus G. destructans has spread southward and westward and has now been found in 16 states and four Canadian provinces.

Bat declines in the Northeast, the most severely affected region in the United States, have already exceeded 80 percent. G. destructans has reached Indiana and Ontario, Canada, Lorch said, and could shortly arrive in Wisconsin.

Confirming G. destructans as the cause of white-nose syndrome could not only support research into various disease management strategies for bats, Lorch added, but also aid those trying to predict how fast and far it will spread. The results could further help explain why G. destructans is deadly to bats in North America, but not to bats in Europe.

One likely explanation is that long-term exposure in Europe has caused bats to evolve to coexist with the fungus. Because the fungus was recently introduced to North America, the severity of white-nose syndrome in bats on this continent may reflect exposure of naïve bat populations to a novel pathogen.

“Disease involves the interaction of the pathogen, the host and the environment,” says Lorch, “and understanding their interactions will be essential for mitigating the effects of white-nose syndrome. Identifying G. destructans as causing the disease will help direct future research toward elucidating what makes the fungus pathogenic, what makes North American bats susceptible, and what environmental factors are important for disease progression and transmission to take place.”

Contacts and sources:
Story by David Tenenbaum
University of Wisconsin-Madison
on October 28, 2011