When a bacterial cell divides into two daughter cells and those two cells divide into four more daughters, then 8, then 16 and so on, the result, biologists have long assumed, is an eternally youthful population of bacteria. Bacteria, in other words, don’t age—at least not in the same way all other organisms do. 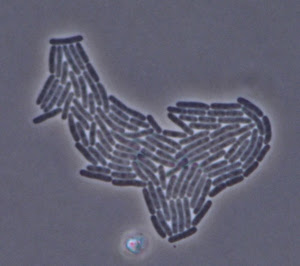 But a study conducted by evolutionary biologists at the University of California, San Diego questions that longstanding paradigm. In a paper published in the November 8 issue of the journal Current Biology, they conclude that not only do bacteria age, but that their ability to age allows bacteria to improve the evolutionary fitness of their population by diversifying their reproductive investment between older and more youthful daughters. An advance copy of the study appears this week in the journal’s early online edition.

“Aging in organisms is often caused by the accumulation of non-genetic damage, such as proteins that become oxidized over time,” said Lin Chao, a professor of biology at UC San Diego who headed the study. “So for a single celled organism that has acquired damage that cannot be repaired, which of the two alternatives is better—to split the cellular damage in equal amounts between the two daughters or to give one daughter all of the damage and the other none?”

The UC San Diego biologists’ answer—that bacteria appear to give more of the cellular damage to one daughter, the one that has “aged,” and less to the other, which the biologists term “rejuvenation”—resulted from a computer analysis Chao and colleagues Camilla Rang and Annie Peng conducted on two experimental studies. Those studies, published in 2005 and 2010, attempted unsuccessfully to resolve the question of whether bacteria aged. While the 2005 study showed evidence of aging in bacteria, the 2010 study, which used a more sophisticated experimental apparatus and acquired more data than the previous one, suggested that they did not age.

“We analyzed the data from both papers with our computer models and discovered that they were really demonstrating the same thing,” said Chao. “In a bacterial population, aging and rejuvenation goes on simultaneously, so depending on how you measure it, you can be misled to believe that there is no aging.”

In a separate study, the UC San Diego biologists filmed populations of E. colibacteria dividing over hundreds of generations and confirmed that the sausage-shaped bacteria divided each time into daughter cells that grew elongated at different rates—suggesting that one daughter cell was getting all or most of the cellular damage from its mother while the other was getting little or none. Click this link to watch the time-lapse film of one bacterium dividing over 10 generations into 1,000 bacteria in a period of five hours and see if you can see any differences.

“We ran computer models and found that giving one daughter more the damage and the other less always wins from an evolutionary perspective,” said Chao. “It’s analogous to diversifying your portfolio. If you could invest $1 million at 8 percent, would that provide you with more money than splitting the money and investing $500,000 at 6 percent and $500,000 at 10 percent?”

“After one year it makes no difference,” he added. “But after two years, splitting the money into the two accounts earns you more and more money because of the compounding effect of the 10 percent. It turns out that bacteria do the same thing. They give one daughter a fresh start, which is the higher interest-bearing account and the other daughter gets more of the damage.”

Although E. coli bacteria appear to divide precisely down the middle into two daughter cells, the discovery that the two daughters eventually grow to different lengths suggests that bacteria do not divide as symmetrically as most biologists have come to believe, but that their division is really “asymmetrical” within the cell.

“There must be an active transport system within the bacterial cell that puts the non-genetic damage into one of the daughter cells,” said Chao. “We think evolution drove this asymmetry. If bacteria were symmetrical, there would be no aging. But because you have this asymmetry, one daughter by having more damage has aged, while the other daughter gets a rejuvenated start with less damage.”