All observations in astronomy are based on light emitted from stars and galaxies and, according to the general theory of relativity, the light will be affected by gravity. At the same time all interpretations in astronomy are based on the correctness of the theory of relatively, but it has never before been possible to test Einstein's theory of gravity on scales larger than the solar system.

Now astrophysicists at the Dark Cosmology Centre at the Niels Bohr Institute have managed to measure how the light is affected by gravity on its way out of galaxy clusters. The observations confirm the theoretical predictions. The results have been published in the prestigious scientific journal, Nature.

Researchers have analyzed measurements of the light from galaxies in approximately 8,000 galaxy clusters. Galaxy clusters are accumulations of thousands of galaxies (every light in the image is a galaxy), which are held together by their own gravity. This gravity affects the light that is sent out into space from the galaxies. 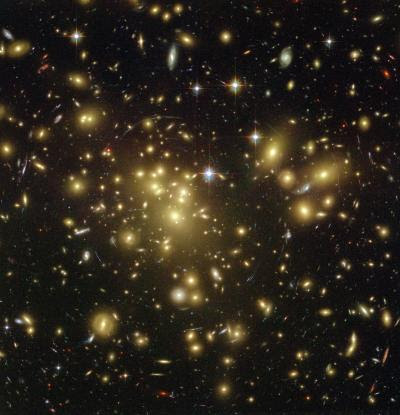 Observations of large distances in the universe are based on measurements of the redshift, which is a phenomenon where the wavelength of the light from distant galaxies is shifted more and more towards the red with greater distance. The redshift indicates how much the universe has expanded from when the light left until it was measured on Earth. Furthermore, according to Einstein's general theory of relativity, the light and thus the redshift is also affected by the gravity from large masses like galaxy clusters and causes a gravitational redshift of the light. But the gravitational influence of light has never before been measured on a cosmological scale.

"It is really wonderful. We live in an era with the technological ability to actually measure such phenomena as cosmological gravitational redshift", says astrophysicist Radek Wojtak, Dark Cosmology Centre under the Niels Bohr Institute at the University of Copenhagen.

Galaxy clusters in the searchlight

Radek Wojtak, together with colleagues Steen Hansen and Jens Hjorth, has analysed measurements of light from galaxies in approximately 8,000 galaxy clusters. Galaxy clusters are accumulations of thousands of galaxies, held together by their own gravity. This gravity affects the light being sent out into space from the galaxies.

The researchers have studied the galaxies lying in the middle of the galaxy clusters and those lying on the periphery and measured the wavelengths of the light.

"We could measure small differences in the redshift of the galaxies and see that the light from galaxies in the middle of a cluster had to 'crawl' out through the gravitational field, while it was easier for the light from the outlying galaxies to emerge", explains Radek Wojtak.

Until now, the gravitational redshift has only been tested with experiments and observations in relation to distances her on Earth and in relation to the solar system. With the new research the theory has been tested on a cosmological scale for the first time by analyzing galaxies in galaxy clusters in the distant universe. It is a grotesquely large scale, which is a factor 1,022 times greater (ten thousand billion billion times larger than the laboratory test). The observed data confirms Einstein’s general theory of relativity. 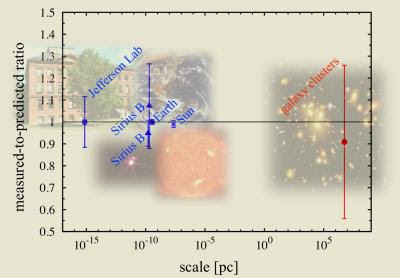 Then he measured the entire galaxy cluster's total mass and with that got the gravitational potential. By using the general theory of relativity he could now calculate the gravitational redshift for the different locations of the galaxies.

"It turned out that the theoretical calculations of the gravitational redshift based on the general theory of relativity was in complete agreement with the astronomical observations. Our analysis of observations of galaxy clusters show that the redshift of the light is proportionally offset in relation to the gravitational influence from the galaxy cluster's gravity. In that way our observations confirm the theory of relativity", explains Radek Wojtak.

New light on the dark universe

The discovery has significance for the phenomena in the universe that researchers are working to unravel. It is the mysterious dark universe – dark matter and dark energy.

In addition to the visible celestial bodies like stars, planets and galaxies, the universe consists of a large amount of matter, which researchers can work out that it must be there, but which cannot be observed as it neither emits nor reflects light. It is invisible and is therefore called dark matter. No one knows what dark matter is, but they know what the mass and thus the gravity must be. The new results for gravitational redshift do not change the researchers' modelling for the presence of dark matter.

Theory tested on a large scale