After only six months in orbit around Mercury, NASA's MESSENGER spacecraft is sending back information that has revolutionized the way scientists think about the innermost planet. Analyses of new data from the spacecraft show, among other things, new evidence that flood volcanism has been widespread on Mercury, the first close-up views of Mercury's "hollows," the first direct measurements of the chemical composition of Mercury's surface, and the first global inventory of plasma ions within Mercury's space environment.

A View Looking Down on the North Pole of Mercury (Center): Red circles show the locations of impact craters larger than 20 km in diameter. The area of contiguous northern high-latitude smooth plains mapped by MESSENGER from orbit (inside the black line) covers 4.7 million square kilometers, over 6% of the surface of Mercury. Note that the number of craters superposed on the plains is much less than in the surrounding areas, indicating the relative youth of the plains. 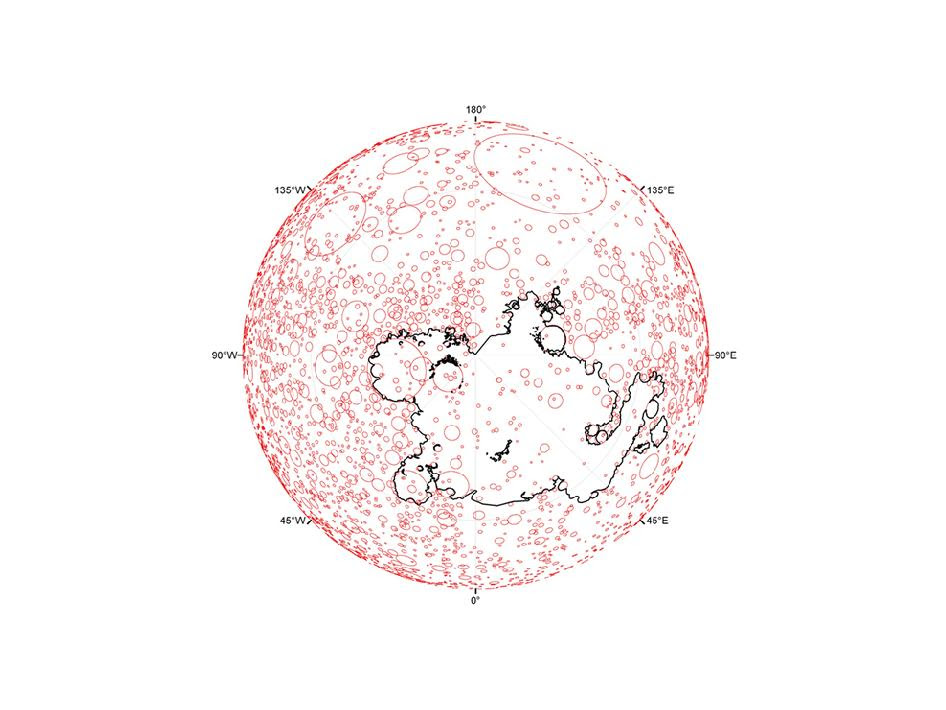 The results are reported in a set of seven papers published in a special section of Science magazine on September 30, 2011.

"MESSENGER's instruments are capturing data that can be obtained only from orbit," says MESSENGER Principal Investigator Sean Solomon, of the Carnegie Institution of Washington. "We have imaged many areas of the surface at unprecedented resolution, we have viewed the polar regions clearly for the first time, we have built up global coverage with our images and other data sets, we are mapping the elemental composition of Mercury's surface, we are conducting a continuous inventory of the planet's neutral and ionized exosphere, and we are sorting out the geometry of Mercury's magnetic field and magnetosphere. And we've only just begun. Mercury has many more surprises in store for us as our mission progresses."

A Large Crater with a Floor Partially Covered by Large Numbers of Coalesced Hollows: Here a high-resolution monochrome image has been combined with a lower-resolution enhanced-color image. The hollows appear in cyan, a result of their high reflectance and bluish color relative to other parts of the planet. The large pit in the center of the crater may be a volcanic vent, from which the orange material erupted. 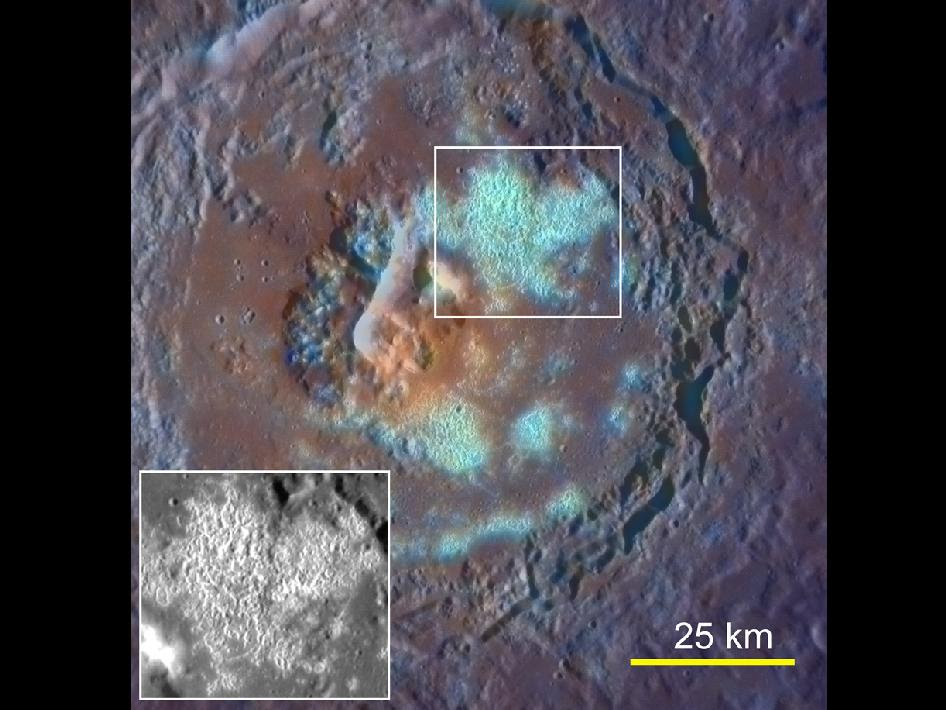 For decades scientists had puzzled over whether Mercury had volcanic deposits on its surface. MESSENGER's three flybys answered that question in the affirmative, but the global distribution of volcanic materials was not well constrained. New data from orbit show a huge expanse of volcanic plains surrounding the north polar region of Mercury. These continuous smooth plains cover more than 6% of the total surface of Mercury.

The volcanic deposits are thick. "Analysis of the size of buried ‘ghost' craters in these deposits shows that the lavas are locally as thick as 2 kilometers" (or 1.2 miles), explains James Head of Brown University, the lead author of one of theScience reports. "If you imagine standing at the base of the Washington Monument, the top of the lavas would be something like 12 Washington Monuments above you."

Schematic illustration of the operation of MESSENGER's Gamma-Ray Spectrometer (GRS). Galactic cosmic rays interact with the surface of Mercury to a depth of tens of centimeters, producing high-energy ("fast") neutrons. These neutrons further interact with surface material, resulting in the emission of gamma rays with energies characteristic of the emitting elements and low-energy ("slow") neutrons. Naturally occurring radioactive elements such as potassium (K), thorium (Th), and uranium (U) also emit gamma rays. Detection of the gamma rays and neutrons by GRS allows determination of the chemical composition of the surface.
Credit: NASA/Johns Hopkins University Applied Physics Laboratory/Carnegie Institution of Washington
According to Head, the deposits appear typical of flood lavas, huge volumes of solidified molten rock similar to those found in the few-million-year-old Columbia River Basalt Group, which at one point covered 150,000 square kilometers (60,000 square miles) in the northwest United States. "Those on Mercury appear to have poured out from long, linear vents and covered the surrounding areas, flooding them to great depths and burying their source vents," Head says.

Scientists have also discovered vents, measuring up to 25 kilometers (16 miles) in length, that appear to be the source of some of the tremendous volumes of very hot lava that have rushed out over the surface of Mercury and eroded the substrate, carving valleys and creating teardrop-shaped ridges in the underlying terrain. "These amazing landforms and deposits may be related to the types of unusual compositions, similar to terrestrial rocks called komatiites, being seen by other instruments and reported in this same issue of Science," Head says. "What's more, such lavas may have been typical of an early period in Earth's history, one for which only spotty evidence remains today."

As MESSENGER continues to orbit Mercury, the imaging team is building up a global catalog of these volcanic deposits and is working with other instrument teams to construct a comprehensive view of the history of volcanism on Mercury.

Images collected by MESSENGER have revealed an unexpected class of landform on Mercury and suggest that a previously unrecognized geological process is responsible for its formation. Images collected during the Mariner 10 and MESSENGER flybys of Mercury showed that the floors and central mountain peaks of some impact craters are very bright and have a blue color relative to other areas of Mercury. These deposits were considered to be unusual because no craters with similar characteristics are found on the Moon. But without higher-resolution images, the bright crater deposits remained a curiosity.

Now MESSENGER's orbital mission has provided close-up, targeted views of many of these craters.

"To the surprise of the science team, it turns out that the bright areas are composed of small, shallow, irregularly shaped depressions that are often found in clusters," says David Blewett, a staff scientist at the Johns Hopkins University Applied Physics Laboratory (APL) in Laurel, Md., and lead author of one of the Science reports. "The science team adopted the term ‘hollows' for these features to distinguish them from other types of pits seen on Mercury."

Hollows have been found over a wide range of latitudes and longitudes, suggesting that they are fairly common across Mercury. Many of the depressions have bright interiors and halos, and Blewett says the ones detected so far have a fresh appearance and have not accumulated small impact craters, indicating that they are relatively young.

"Analysis of the images and estimates of the rate at which the hollows may be growing led to the conclusion that they could be actively forming today," Blewett says. "The old conventional wisdom was that ‘Mercury is just like the Moon.' But from its vantage point in orbit, MESSENGER is showing us that Mercury is radically different from the Moon in just about every way we can measure."

Mercury's Surface and Exospheric Composition, Up Close and Personal

Scientists are collecting data about the chemical composition of Mercury's surface that could not have been obtained without the sustained observing perspective that MESSENGER's orbit provides, and that information is being used to test models of Mercury's formation and shed light on the dynamics of the planet's exosphere.

Measurements of Mercury's surface by MESSENGER's Gamma-Ray Spectrometer (GRS) reveal a higher abundance of the radioactive element potassium, a moderately volatile element that vaporizes at a relatively low temperature, than previously predicted. Together with MESSENGER's X-Ray Spectrometer (XRS), it also shows that Mercury has an average surface composition different from those of the Moon and other terrestrial planets.

"Measurements of the ratio of potassium to thorium, another radioactive element, along with the abundance of sulfur detected by XRS, indicate that Mercury has a volatile inventory similar to Venus, Earth, and Mars, and much larger than that of the Moon," says APL Staff Scientist Patrick Peplowski, lead author of one of the Science papers.

These new data rule out most existing models for Mercury's formation that had been developed to explain the unusually high density of the innermost planet, which has a much higher mass fraction of iron metal than Venus, Earth, or Mars, Peplowski pointed out. Overall, Mercury's surface composition is similar to that expected if the planet's bulk composition is broadly similar to that of highly reduced or metal-rich chondritic meteorites (material that is left over from the formation of the solar system). 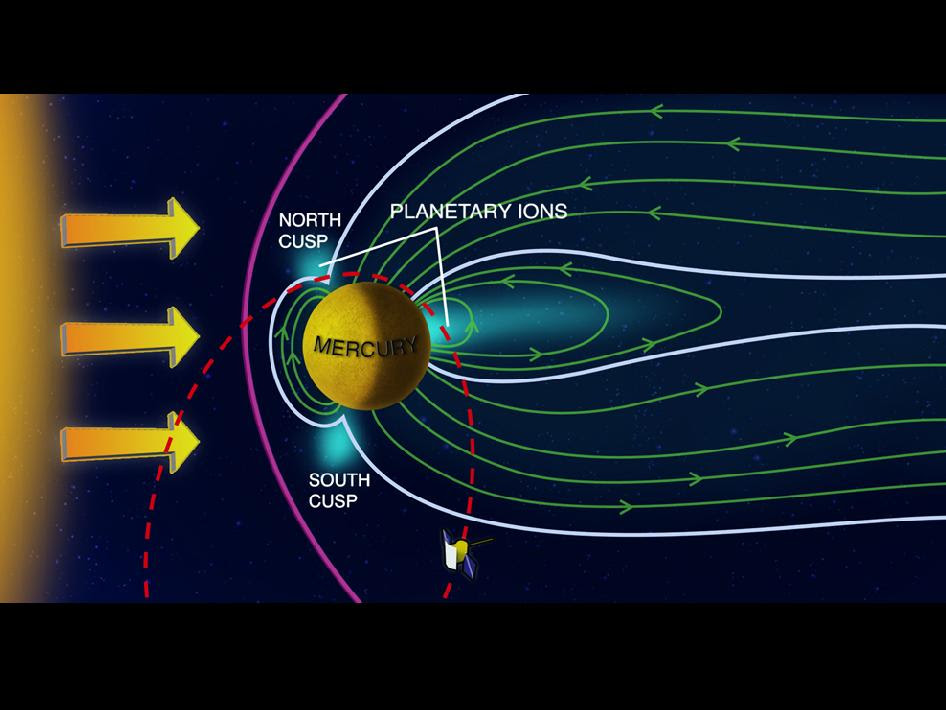 The team found that sodium is the most important ion contributed by the planet. "We had previously observed neutral sodium from ground observations, but up close we've discovered that charged sodium particles are concentrated near Mercury's polar regions where they are likely liberated by solar wind ion sputtering, effectively knocking sodium atoms off Mercury's surface," notes the University of Michigan's Thomas Zurbuchen, author of one of the Science reports. "We were able to observe the formation process of these ions, one that is comparable to the manner by which auroras are generated in the Earth atmosphere near polar regions."

The FIPS sensor detected helium ions throughout the entire volume of Mercury's magnetosphere. "Helium must be generated through surface interactions with the solar wind," says Zurbuchen. "We surmise that the helium was delivered from the Sun by the solar wind, implanted on the surface of Mercury, and then fanned out in all directions.

"Our results tell us that Mercury's weak magnetosphere provides the planet very little protection from the solar wind," he continued. "Extreme space weather must be a continuing activity at the surface of the planet closest to the Sun."

"These revelations emphasize that Mercury is a fascinating world that is unmatched in the solar system," says Blewett. "We have barely begun to understand what Mercury is really like and are eager to discover what Mercury can tell us about the processes that led to formation of the planets as we see them today."