Planetary scientists at Brown University and participating institutions have discovered vast, smooth plains around Mercury’s north pole that were created by volcanic activity more than 3.5 billion years ago. The lava flows were epic: They filled craters more than a mile deep and cover 6 percent of Mercury’s surface, an area that would cover nearly 60 percent of the continental United States, the scientists write in the journal Science.

Lava flows on Mercury more than 3.5 billion years ago — a mile deep in places — would have covered nearly 60 percent of the continental United States. The discovery was made by data returned from NASA’s MESSENGER mission to Mercury. 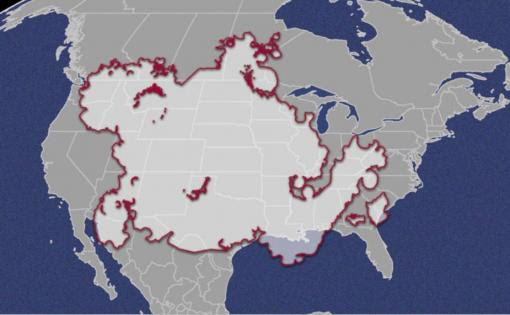 Ever since the Mariner 10 mission in 1974 snapped the first pictures of Mercury, planetary scientists have been intrigued by smooth plains covering parts of the surface. Some suspected past volcanic activity, but there were no telltale signs like protruding volcanoes. Also, Mercury’s northern plains are the same brightness as its cratered highlands, yet different from volcanic deposits on the Moon, which are darker than the highlands.

“For more than 35 years we have been uncertain about the role of volcanic activity on Mercury,” said James W, Head III, professor of geological sciences at Brown University.

In a paper published in Science, Head and more than two dozen colleagues from Brown and other institutions used data from the orbiting MESSENGER spacecraft to examine Mercury’s largely unseen northern high latitudes. They report that the smooth plains there are the result of volcanic activity. Early in the planet’s history — some 3.5 to 4 billion years ago, the scientists say — huge volumes of lava poured out from cracks in Mercury’s surface, flooding the surrounding, low-lying plains “like a bathtub,” Head said. The lava flows, the scientists write, fill craters more than a mile deep and cover 6 percent of Mercury’s surface, an area that would cover nearly 60 percent of the continental United States. The volume would have been enough to bury the state of Texas more than four miles deep.

The lava flows “don’t build a volcano like we see on Hawaii; rather, they cover up the place where the lava is coming out, and they’re very difficult to understand in the context of the current Earth eruption conditions,” said Head, who has studied volcanism on planets and moons for more than four decades.

“But one thing is clear,” added Jennifer Whitten, a graduate student in Head’s research group and a contributing author on the paper. “So much lava comes out so rapidly, that it’s an entirely different type of volcanism than we see at Hawaii. This gives us big clues about what’s going on in the interior of Mercury.”

Head explained that the lava flows give scientists insights into how planets are born, how they evolved and whether they’re still active. “For example, on the Moon, we see very little evidence of activity of volcanic processes over the last 2 to 3 billion years,” he added.

To confirm the plains were caused by very rapid volcanism, the researchers looked at a feature about 125 miles outside the volcanic zone. There, they saw evidence of a fissure vent, with wide river-like channels emanating from the crack. “These features are similar to lava flows and very fluid flows that erode much of the surrounding terrain,” said Debra Hurwitz, also a graduate student with Head, who studies similar features on the Moon and Mars and is a contributing author on the paper.

The team believes this is similar to what happened in the smooth plains, but the clues have been largely erased by the sheer volume of lava that poured out.

“When trying to understand the origin of the smooth plains, it is helpful to look at the margin of the plains and its surroundings,” said Caleb Fassett, a postdoctoral researcher at Brown now teaching at Mount Holyoke College, and a contributing author on the paper. “Where the plains thin and meet surrounding terrain, the differences between the plains and pre-existing terrain can help give us insight into how the plains were formed.”

The MESSENGER spacecraft has been orbiting Mercury since March. The same spacecraft executed three flybys of Mercury in previous years, which gave the scientists their first look at the smooth plains. The team hopes that other instruments on MESSENGER will allow them to better understand the minerals and chemical composition in the northern high latitudes, as well as to compare the volcanic activity there with other regions that experienced volcanism.

“This one deposit is so huge,” Head said, “volcanism has got to be important elsewhere.”